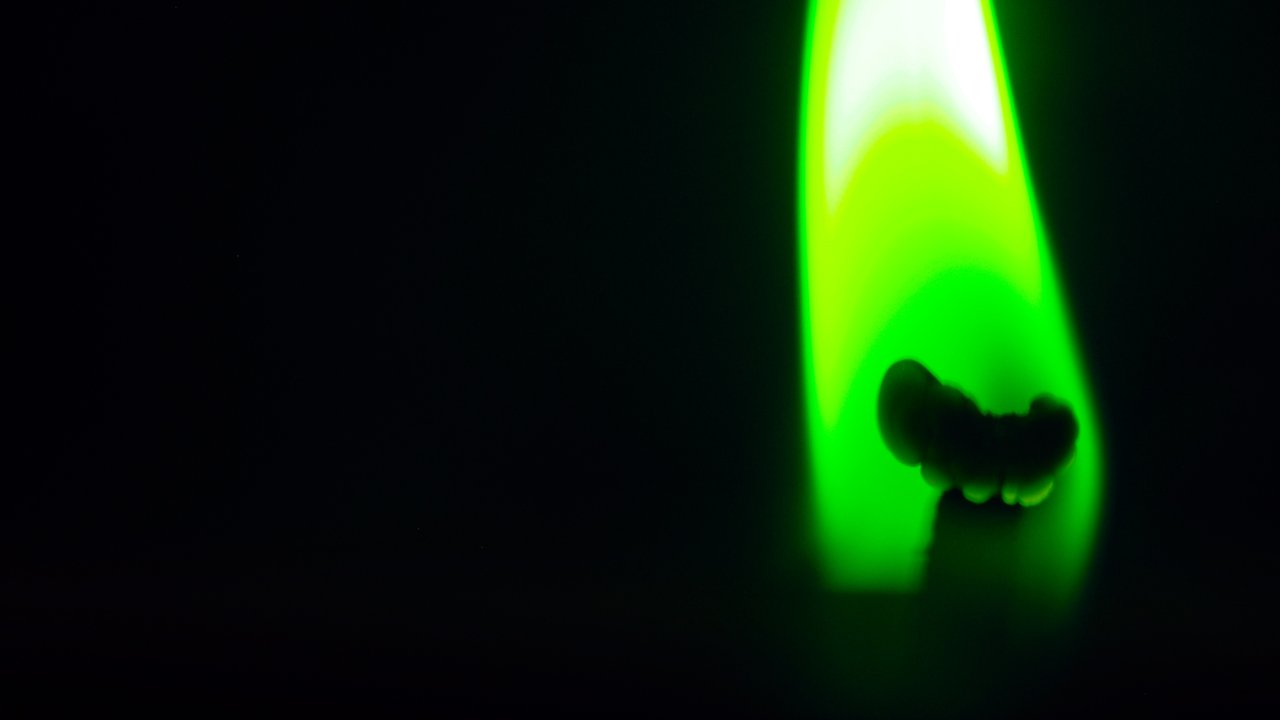 While I don't make price predictions other than the "impossible" of the future, it has been interesting that over the last 12 hours that while HIVE has spiked, the volume itself has remained relatively low - relative to the last six weeks anyway. Below is a 12 hour chart showing the dollar volume on the spikes of the 15th and 27th of February, as well as the 23rd and the 28th of March on Binance. 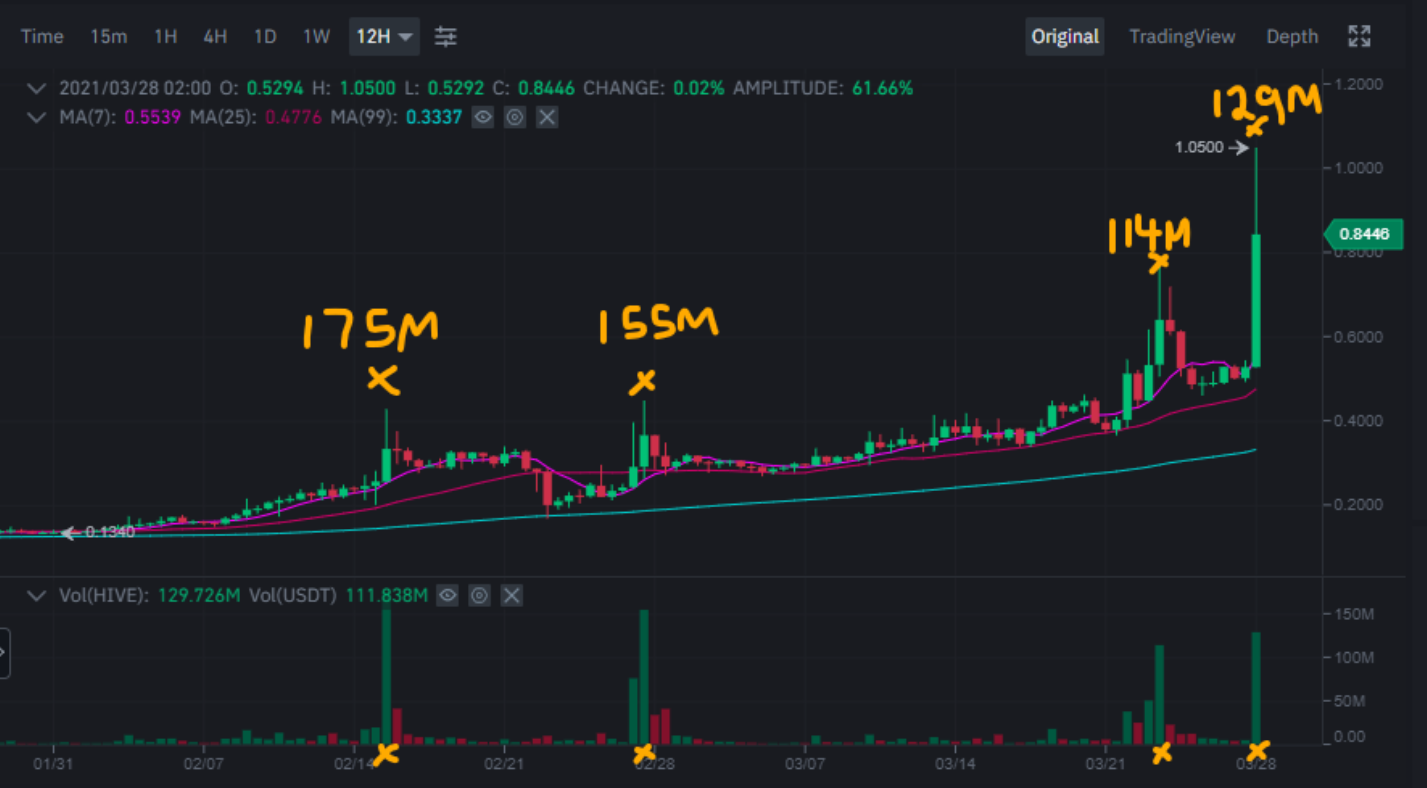 As I have said in my last post, I think quite a few people will have sold in the spikes and might not have bought back in before the next spike. For example, I sold most of my stack on the 27th in February and bought the same amount back pretty much the next day and added more where I could. I only sold a fraction of it in the 23rd of March, but bought more in at the 900s. Now, I am looking to get a buyback in lower than my sells last night, but I think on the bottom runs of the ladders I set, I will have to buy in at a higher price.

However, I might miss my buys and those who are buying around this price, will want to sell higher than they have now. This creates a bit of a scarcity gap in the middle, where orders might get a little thin, until people who are willing to sell in that midrange between here and the current relevant top, powerdown into the market. However, a lot of the people who have been buying in low from the 300s to 800s, might already have cleared out of the market with large gains and might not get back in at all, as even with the large gains, getting in now will seem "expensive" from where they originally bought. Many would have also sold in the 900-1300 range, so to buy now would give them a technical loss on their new position.

For example, someone that buys 1000 tokens at 10 cents and sells at 50 cents has a 500% gain. They have spent 100 and turned it into 500. However, if they miss their buy back at 40 cents and have to buy at 60 cents, their 500 dollars gets them 833 tokens. This means that while they still have large gains, it is like they sold at 41 cents, instead of the 50 they actually did. However, someone else could have picked up 1000 tokens at 40 cents(400 dollars) and sold 833 at 60 cents for a 100 dollar gain and still hold 167 tokens that they might be willing to sell later at 1 dollar. If it does reach a dollar, the first person will have made very respectable 833% gains - but they could have made 1000%. Person number two doesn't make anywhere near those gains, but I am sure is still happy - until Hive goes to 4 dollars.

I wonder, if there was an immediate opportunity to unstake and sell on the open market, under the same market model as last night, how many people would have lost their stack in the run up and still wouldn't be able to buy in at a gain on current price? This is part of the trading game though and I am personally quite glad that I have stake that I consider locked - although I didn't use any of my liquid Hive either, even though the majority of that has been bought on exchanges too. Trading can be stressful and there is a constant pressure where even in the gains, there are losses. I feel it in myself where I made 25% on what I had bought literally a couple hours earlier, yet felt the "loss" of not making 100%.

While there is plenty of liquid Hive on the exchanges, the low volume on last night's spike indicates that a lot of those traders are expecting the price to go further up than what it did, in the same way that I hadn't sold on the spike last week, as I wasn't willing to sell so low. I don't know what price they are expecting, but it looks like there are a lot of buy orders in the next 20% down and not a lot in the 20% up. If there is a thinning of sellers, any significant injection of capital on the upside could drive the price significantly up with a great deal of momentum where the same thing will happen again, a lot of the sellers will clear and they might be priced out of the market again, until there is a last man standing situation, where there isn't a lot of liquid, except those who are expecting a high price.

As I said last night, if you are happy with the price you sold at that is great, congratulations. However, if you are looking to have stake for the future and expect a higher price, even though you made gains on the sell, it might cost you tokens for the future and you may have been better off holding, if it doesn't drop back to a point you are comfortable buying again. In my own observational experience, it is easier to sell for many people than to buy back, so I suspect that many will not do so unless they can make a significant percentage gain on the buy. For me, I am happy either way as while the spike cleared all of my ladder rungs and I am hoping to buy back in lower, even if I don't manage to before the next run up, I am okay with not getting back in because of the low volume I sold, and they are tokens I bought it to trade with, not stake with.

What is going to be interesting is that in the coming days as vote values start to reflect the trading price, people will have to make the decisions on how they approach their game. For me, I am hoping not to have to sell "capital tokens" of any kind for money ever (within reason) and would rather find ways to "live off" the value I can make through things like curation and farming. I think that would be quite a good position to be in as it will mean that if (when) those significantly higher prices arrive, I won't have sold low and have nothing left in the tank. But of course, there is risk in this approach as I might have stake in the tank, but the price might tank as well.

There are so many dynamics that come into play in the trading arena and in combination with the potential to earn in various ways in the ecosystem now, there is a lot more decision complexity. I am not a trader at heart, so this can cause me quite a lot of stress trying to keep ahead and making sure I don't fall behind, but I play at a low level with enough skin in the game that losing hurts, because I believe there is value in conditioning for loss. Because we are so affected by emotions ourselves, we have to expect that a lot of the other people trading are going to be similarly affected, so FOMO can come into play quickly and drive prices both up and down. One will ask, what if the price is going to crash - so they dump what they have - while another person is saying, what if the price is going to boom and they are buying in heavily.

For me, I am happy playing my own game on the outskirts, learning a lot of small lessons with small risks along the way - Some of them ae pats on the back, some of them are papercuts.