It is evident that the chair of the SEC, Gary Gensler, is completely clueless about cryptocurrency. We all know he is against it yet it also appears that he really knows nothing about it. This is a problem since he is in such a powerful position.

Nevertheless, this is commonplace these days. Governments are filled with politicians and bureaucrats who have a lot of power but very little sense. He certainly epitomizes this. 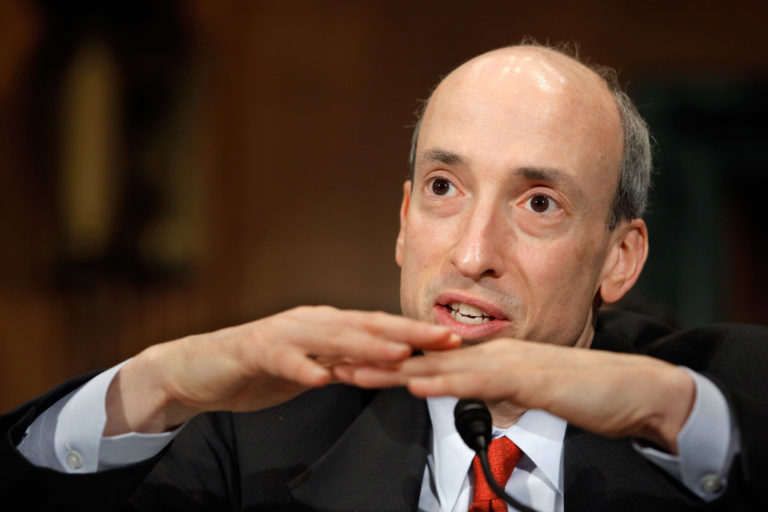 In a recent interview with the Washington Post, Gensler claimed that he doubts the longevity of cryptocurrency. He, naturally, feels that it is highly speculative and requires a lot of regulation.

No surprise considering he nothing more than a former banker who taught cryptocurrency at MIT.

The Chair claims to be open to innovation and technology. Of course, here again he seems to be ignorant of what it does.

Here is a statement from the interview linked above:

So, public money has a certain place around the globe. Private monies usually don't last that long. So, I don't think there's a long-term viability for five- or six thousand private forms of money. History tells us otherwise. So, in the meantime, I think it's worthwhile to have an investor protection regime placed around this.

History often "tells us otherwise" until something changes it. This is often technology. We see this happen all the time. What occurred 6 or 7 times in the past suddenly is no longer the case.

Remember, the past does not equal the future.

For example, there was never a time in human history where information could flow around the world at near instantaneous speed for free. That was absolutely preposterous right up until the 1980s. Since that point in time, does anyone question this concept?

So the Chair does not seem to think that 5 or 6 thousand private forms of money can survive?

Isn't that ironic that it is right around the same time that Mayor Suarez is updating everyone on MiamiCoin. He stated that the City of Miami is receiving about $2,000 every 10 minutes. This is money that was converted to USD and is sitting in the City's coffers. To date, it is about $5 million since the project started.

The Mayor further goes on to state:

“It’s interesting because it’s not an involuntary tax, it’s not philanthropy, it’s something that is completely different and could revolutionize the way governments are funded in the future.”

“It’s theoretically possible that the city could generate enough taxes through MiamiCoin so that our residents don’t have to pay one cent in tax.”

So we have the Mayor of Miami theorizing about citizens not having to pay taxes while the SEC Chair is saying he doubts whether 5K-6K private currencies can survive. This can only make us wonder how long it takes for other municipalities and towns to get onboard with the idea. It is possible we see that thousands successful currencies globally under this program alone.

We then have a concept that is known as the Lindy Effect. Here we see the idea of a non-perishable item such as technology will have a longer life expectancy as it ages.

The Lindy effect (also known as Lindy's Law[1]) is a theorized phenomenon by which the future life expectancy of some non-perishable things, like a technology or an idea, is proportional to their current age. Thus, the Lindy effect proposes the longer a period something has survived to exist or be used in the present, it is also likely to have a longer remaining life expectancy. Longevity implies a resistance to change, obsolescence or competition and greater odds of continued existence into the future.[2] Where the Lindy effect applies, mortality rate decreases with time. Mathematically, the Lindy effect corresponds to lifetimes following a Pareto probability distribution.

Cryptocurrency is a technology that is presently used by 225 million people. It is also seeing massive adoption, meaning we could be near the 300 million mark by the end of the year.

People like Gensler often cite investor protection. This is total nonsense. The only ones they want to protect, at least in the United States, is the banking industry. It is no surprise since, guess where Gensler got his start: Goldman Sachs.

Of course, what is a good story without some ironic twist?

Most are aware the SEC has denied every application for a Bitcoin ETF to date. This certainly is not solely on Gensler since it happened under previous Chairs. However, the policy has not shifted under him either.

Here is where the twist enters the picture.

If Gensler is so anti-Bitcoin and cryptocurrency, why would he not stand up against a Bitcoin Futures ETF? There is speculation that this will be approved by the end of October. Canada already approved ETFs and is expanding the offerings that are legal.

So now Gensler is somewhat warm to an ETF as long as it is tied to the futures? This is where we see the bankers in control.

Gensler knows what took place with the futures market in silver. For decades banks were found to be manipulating the price. They were fined and carried on. The same could be true of Bitcoin.

Hence, the Chair is not dulling the edge he has against Bitcoin. Instead, he is just sharpening it. He is well aware that banks will make a fortune manipulating the market while also likely making the price action unappealing to most. In the end, average investors will lose while the banks gain.

This is what ex-Goldman Sachs employees who are appointed to government oversight positions do.

We are not dealing with the idea of protecting investors. There is nothing here that is looking out for the best interest of the average individual. Instead it is merely a way to favor those who corrupted the establishment for decades.

Of course, there is another ironic twist. Bitcoin is not the only game in town. While it is the largest, by market cap, and most established, innovation is not stopping. As the development in cryptocurrency expands, we are going to see the entire scope of things widening. This is something that the Chair does not appear to understand.

The fact that cryptocurrency is technology means that it follows predictable patterns. One of them is that if it is dammed up, it will only make the impact when the dam burst that much more powerful. Technology is like water in that it just builds until it overwhelms whatever is in front of it. It is why things are very slow for long period of time and then an exponential elbow is hit. The existing players try to keep the status quo until the force gets to the point where they are obliterated.

It is impossible to know when that elbow is hit. We are looking at massive growth in the past few years. How many more will it take? That is hard to say. We do know this is something that is taking place global, with players from many different countries involved. As we see with Mayor Suarez, we also have governments starting to stake their claim.

All of this will eventually overrun people like Gensler. Our defense is still developing in ways that they cannot attack. Simultaneously, we keep pushing adoption to the point that the numbers are simply impossible for them to deal with.

SEC Chair Gensler is clueless about cryptocurrency because he doesn't want to truly know. He is only concerned about maintain the status quo for the banking industry. Fortunately, technology is moving in the direction where people like him will be less relevant in the future.