STEMGeeks: The Next Tribe With Huge Potential

We all saw what happened to Leofinance. Over the last few months, this community saw nice growth in terms of the numbers as well as the excitement. Many of the moves made by the development team kept feeding into the frenzy, causing excitement that we have not seen around these parts in a long time.

While Leofinance is on its way, this will not be enough to lift Hive to great heights. Layer 2 solutions are now being recognized for their power. However, it is going to take many of them replicating the early success of Leofinance to push Hive to the forefront.

Thus, we are going to need about a half dozen tribes/applications following a similar pattern. What others out there have the potential to match it?

In this article, I will throw the name STEMGeeks into the hat. It is a tribe that could have the potential to really attract a bunch of users who are dedicated, involved, and consistent.

What makes me think this has such great potential?

When it comes to loyal users, there is probably not another area that can match STEM. This is not something that most people casually engage in.

Think of it this way. How many times have you heard someone say that he was a philosophy major in school. After graduating, a job was applied for which he got. Upon completing a short training program, he became one of the researching scientists working on plasma powered rockets.

Did you ever hear this story? Of course not. People who end up in the fields of science, math, engineering, and technology do so after years of interest and study. Many engaged in these fields as "hobbies" growing up before embarking upon academic study. The degrees required also tell us how the level of commitment exists.

For a tribe, what is more desirable than a loyal userbase?

One advantage that communities have is that they are targeted and focused. Many want to compare the success of Leofinance to Hive. They are two totally different animals even though all that Leofinance does is posted to Hive.

Hive is a general pool of all posts. Whatever is done through any interface ends up there. Thus, one's feed can be a wide range of topics. In many ways this could be good yet it is a drawback when one is after particular content.

As a community is narrowed in its focus, the dedicated users can develop a tight-knit group. The topics are very clear, with little confusion of what is acceptable compared to what is not.

People who visit [Stemgeeks.net(https://stemgeeks.net/) are seeking something very targeted. They simply do not want to encounter pictures of people's dinner or a poem about the sunset. Certainly there is nothing wrong with those things yet they have their place elsewhere. Stemgeeks provides a forum where targeted content can be found.

One of the big things regarding tokenization is the distribution of the token. Those projects that are mindful of the value of the token stand a chance of being successful.

The STEM token has very tight circulation. At present there are less than 2 million tokens total. At the same time, as we can see below, there is a rather aggressive burn policy. This can enhance the value over time. 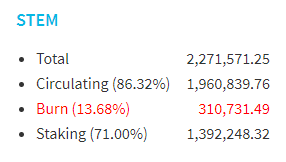 STEMGeeks is a very small community at the moment. This might seem like a disadvantage but it is the exact opposite. In fact, this was the place that Leofinance was a year ago.

A small community enables the present members to really become the foundation for what is being built. This will allow them to help steer the path that the community takes. Of course, the fact that there are few people sharing in the token distribution will only enhance one's position. This makes each person more powerful.

This comes into play when newer people arrive. Those with stake can help the retention rate through their actions. With a focused market such as STEM, this can carry even greater meaning as topics that are rather advanced can come up. Those with expertise and stake can really help propel things forward.

Another advantage to a small community is growth rates can add up very quickly. It is hard for Facebook to double its user base. However, something like STEMGeeks can add 100% each month for a number of months.

As Leofinance proved, a few hundreds active, dedicated users can really make a difference and create quite a stir. STEMGeeks could follow this same path.

There is a lot of discussion on Hive about how it offers resistance to censorship.

This is becoming a bigger problem in the scientific community. It seems that only politically accepted points of view are allowed discussion. Here we see a true problem for science since this field depends heavily upon debate for forward progress. It is through disagreement, new hypothesis, and experimentation that we arrive at breakthroughs.

We are not seeing this today. There is too much of "the science is settled" turning science into a religion. Science abhors group think yet that is exactly what we have.

For this reason, a site like STEMGeeks is required. Here is a place where anyone can post their research or theories. Open debate can take place whereby both sides can be analyzed. This is the foundation of scientific thought.

As a follower of technology, I can tell you it is taking on a more important role in people's lives. Thus, it is vital that people start to pay attention to what is taking place, at least in the general sense.

Many fear the future because they are woefully unaware of what is happening. For example, we heard that quantum computing is going to make cryptocurrency obsolete simply because the encryption is broken. Some have even used that idea as a reason NOT to get involved in cryptocurrency.

Here is where we see a lack of understanding coming into play. Quantum computing is not just around the corner. It is going to take a long time before we have anything resembling a classical computer but in quantum. Even when discoveries are made in that field that can advance it forward, it will take more than a decade before we see a suite of usable applications developed.

In other words, do not expect to Santa to deliver a quantum computer this year.

There are many people who write and vlog about different technologies. These people do not get very technical but, rather, deal with stuff from the 5,000 foot level. This is an enormous market since average individuals should start paying attention to this stuff.

Either way, as technology becomes a larger part of our lives, the target market for a STEMGeeks will grow. This could serve it well over the next half decade as more people become aware of this fact.

It might be time to turn out attention towards STEMGeeks. There obviously needs some development to take place but the potential is there. With some advancement, this community could quickly move up the ranks and garner a great deal of attention.

As shown, the target market already exists, is expanding, and is extremely dedicated.

In my mind, this is the foundation for what could be a very successful community.