Productivity J Curve: Get Ready For A Massive Increase

It is no secret the global economy, led by the United States, has sucked the last couple decades. Estimates are that the growth rate the last decade was half of what it was in the 1990s and early 2000s.

We saw these results in spite of massive technological advancements. Hence, we have a disconnect on what is taking place.

Actually, there is nothing amiss with this. In fact, it could be summed up as the "J Curve" of productivity. 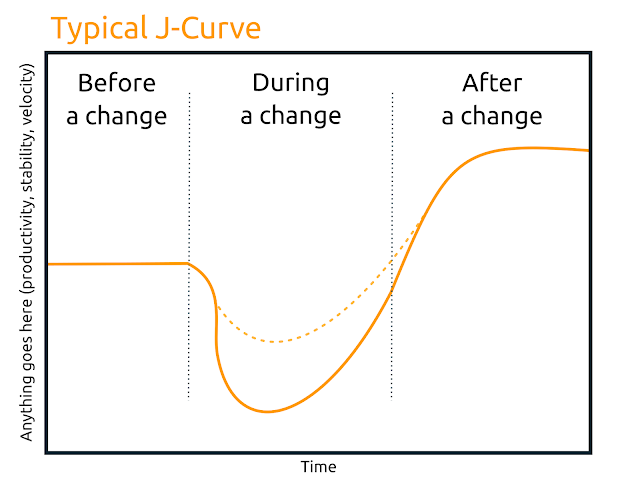 As we can see, the typical curve is that as a change is made, things actually decline. This ends up pulling productivity down, in this case due to a technological implementation. Once time passes, the impact starts to move up, surpassing the original starting point.

This summarizes what has taken place with companies the last decade. They were on a J Curve of productivity due to technological implementation.

If we consider what companies did, we can see clearly how this unfolded.

Over the last decade, companies implemented a great deal of technology. They did this by purchasing software programs or investing in robotics. However, these are added as auxiliary pieces. They were not central parts of most organizations.

In other words, many entities added software programs yet did not were not software-based companies. While there was an impact due to the addition, it was not a wholesale change.

That is starting to evolve. We are seeing companies learning to address their issues through technology. No matter what the industry, it is becoming a larger part of the business model. Efficiencies are being realized as the integration takes place on a wider scale.

The result of this is that we are going to enjoy radical output with less resources going forward.

We all read the surveys that are clearly showing how most companies are planning to accelerate the implementation of automation due to the pandemic. Whether it is because of the social distancing, rising wages in some industries, or simply because the ROI is making more sense, corporations are all moving in this direction.

One other facet of this discussion that is not often brought up is the fact that companies were able to restructure during the pandemic. Since employees were sent home (laid off) during the lockdown, it enabled institutions to alter their internal workings. This meant that a lot of old systems were discarded and replaced with new models.

Of course, one of the casualties of this is employment. Many industries are showing massive declines in workers as automation takes over.

This acceleration is allowing many entities to finally start working their way up the curve. At some point, the more efficient use of resources is going to massively increase production. It was something we saw evolve over a number of decades in the manufacturing sector.

There is one other factor in this equation that is worthy to note. Compared to we were dealing with a decade ago, we are much further ahead. Technology advanced a tremendous amount over the last decade.

So while companies became more adept at integrating technology into their core operations, the technology itself was better. This means that the results are that much improved.

For example, there was a time when machine learning programs were about 70% accurate. Today, they improved to the point where they are better than humans at identifying certain things. Hence, companies can implement them with much greater results than before.

All of this will compound the effects that are received in the years ahead. With stronger technology, more accommodating organizations, and different structures, we are on the cusp of a tremendous change.

The "Productivity J Curve" is a well known economic theory. We have seen it transpire in many instances. Presently, we are seeing how it is applied to technology. That means we can expect massive increases in production going forward.

It will be interesting to see how much of a boost we see by the end of the decade.