The Great Resignation Has Another Major Factor

Over the last couple months, we discussed how things are radically changing within the workforce. The remote work idea is not something that is going away. This is in alignment with technological trends. We are also seeing a few other factors entering the picture.

The bottom line is the balance of power is shifting. Companies enjoyed a 50 year run of things being in their favor when it comes to the employer-employee equation. Since the early 1970s, the workforce was overloaded with people. This caused a host of changes to take place in the relationship with employers. It is no surprise how workers got the short end of the stick.

Now, there is a paradigm shift taking place. The corporations were not prepared for it and are having a tough time. As stated, there are many factors that people are theorizing. However, all signs point to this being the case going forward.

Companies better adapt quickly or they are going to find themselves left behind. There is a major reason for The Great Resignation, one that is not really being discussed.

The Baby Boomers giveth and they taketh away.

A lot of this mess was caused by millions of Boomers entering the workforce 50 years ago. In the late 60s, the first wave of them entered, pushing the numbers up. Throughout the 1970s, they just kept coming. Millions upon millions. There was no end to them.

This also took place in the 1980s. We saw a run of near 20 years when tens of millions of people entered the job market.

Simple math tells us something was bound to go awry. If we start to look at those who first entered the work place in the late 1960s, that means they would start to exit in the early 2010s. That is something that started to occur.

Of course, just like there was wave after wave entering, many started to leave each year. This continued at a steady pace up to 2020. Then it accelerated. 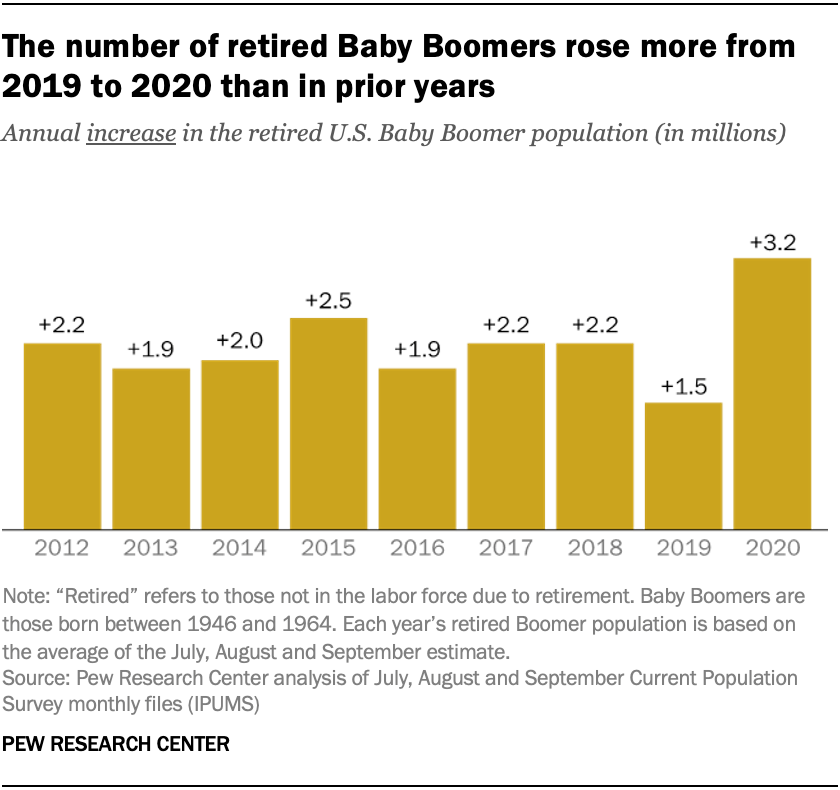 This chart tells what was taking place but does not capture the full extent of the story. According to a study done by Pew Research, we find the numbers are rather large.

That is a stunning figure. That was through the third quarter, 2020. We are now more than a year later. Even if things revert back to the original 2 million or so retirees per year from this group, we are now over 30 million Baby Boomers who retired.

To further show how much of an impact this is, let us look at the demographics. 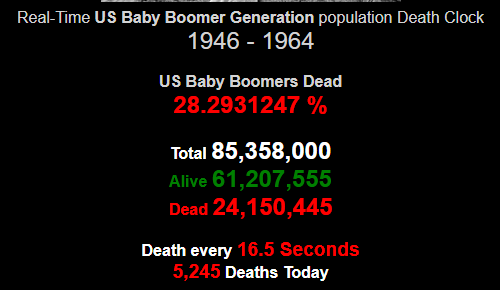 This is the largest generation ever. As we can see, there were 85 million Boomers born. We also have a bit more than 24 million dead. Couple that with the 28.6 million who considered themselves retired (some might have died in the last year but not enough to make a difference in what we are discussing here), and we can see more than 52 million are no longer part of the workforce.

Obviously the acceleration of the retirement of many people is only increasing the overall impact of what is taking place.

Employers are going to have to adapt and they better do so quickly.

The demographics are causing a massive shift. As the Boomers voluntarily leave the scene, they are taking a lot of experience with them. That means many Gen X and Millennials are able to move up quicker than they would have normally.

It will also feed into the remote work idea even more. These generations are not as technologically averse as the Boomers. In fact, the Millennials are quickly turning enterprises they control into high-tech operations. They will opt for technology to solve a problem before a person.

All this is telling us that what we are witnessing is "the new normal**. The demographic situation is not going to get better. The chart clearly shows that roughly 10K Boomers are retiring each working day. That means in by next weekend, 50K will have left on average. If the number continues higher over the 2020 pace, we could see that get near the 15K number per day.

Of course, something else that we regularly discuss is lurking around the corner. Companies are looking to solve their labor shortage problem by turning to automation. That is another variable that is going to radically alter the landscape throughout the rest of this decade.

There is going to be a tug-o-war going on with this for a while. It will not be settled anytime soon.

it's just starting. i predict it will reach the most severe level in 5-10 years

I guess so as well boss

Now I just wonder if stimulus or some form of UBI will be pushed by the government. After all, both sides leads to less people working but it still doesn't remove people's needs and the minimum cost they need for living.

i don't think they will have a choice. It's not working and it's unrealistic for us to believe it can happen any other way.

If you are a worker,you need to be investing, so that when you retire,if your pension didn't come, you eat from your investment.

THe money is already gone lol. These people with taxes and high cost of living constantly going up. Likely don't have anything to invest. So they are finished for the most part. It's no way these masses of people are going to find a way out. Crypto is the same as the standard economy. It's even worse the ratio of who owns the blockchain is far worse. So that's hardly going to be a solution for most people.

Yes this is all inevitable. It's amazing people see this but are incapable of creating solutions. They are awaiting for the bomb to go off and the blast and aftermath to lead to the scramble. So what i see is the people who got into projects like bitcoin myk early. Established their positions will be the group prepared and navigate these type situations the best.

That is because bitcoin myk is more deflationary than bitcoin. However it provides a blockchain solution to what i believe will be one of our biggest problems in human history ever to occur. No other project is constructed to do this in a more well structured way than bitcoin myk. You have projects on ethereum like proof of humanity doing this. It's ridiculous they doing it with high fees. Which pretty much defeats the purpose.

They requesting more info than you probably would need to get a passport which again is dumb. So the projects out there doing that will in comparison to bitcoin myk not be as effective. Now i expect the bottoms to fall out in the next 5 years. However from an investment standpoint the people who already hold bitcoin myk clearly will be in a better position. However i believe the popularity of crypto projects will just switch to projects combatting the most important issue almost in human history.

That's not exaggeration. it's just common sense and it's reality. The Great Resignation is a looking glass into capitalism as we know it will fail. Capitalism depends on ideas of incentive and greed and government partnerships. Now people are saying freedom looks more like not having to take this job if we don't want to do it.

The incentive being the people are happier and free with their families with love and time. That's the actual currency of value. Not some false ponzi scheme, prestige model that puts less than 1% of the people in charge. THen they sing a song about it being better than every other system. Now the people see the truth. THey will keep seeing the truth. it is futile to deny this. You may as well be on the titantic getting better accomodations into the ship sinks. Knowing it will sink. It will no doubt about it. NOthing can stop that. Only thing we can do is create systems that make it easier to navigate it. however nothing can stop what will occur.

Value systems have shifted. Crypto is part of that capitalistic system. What happens when people equate your crypto models to the same models they are walking away from. They will choose models that are opposite that i suspect. ONce value systems change it's signaling the end.