What Is Telos? Part I | The Telos Network

LeoFinance
9 Min Read
1724 Words
We are all thankful for the astounding warm welcome given by the Hive Community. Therefore, this should all be known to any other crypto-projects out there that being here on Hive should not be a conflict of interest but rather a great way for interoperability. 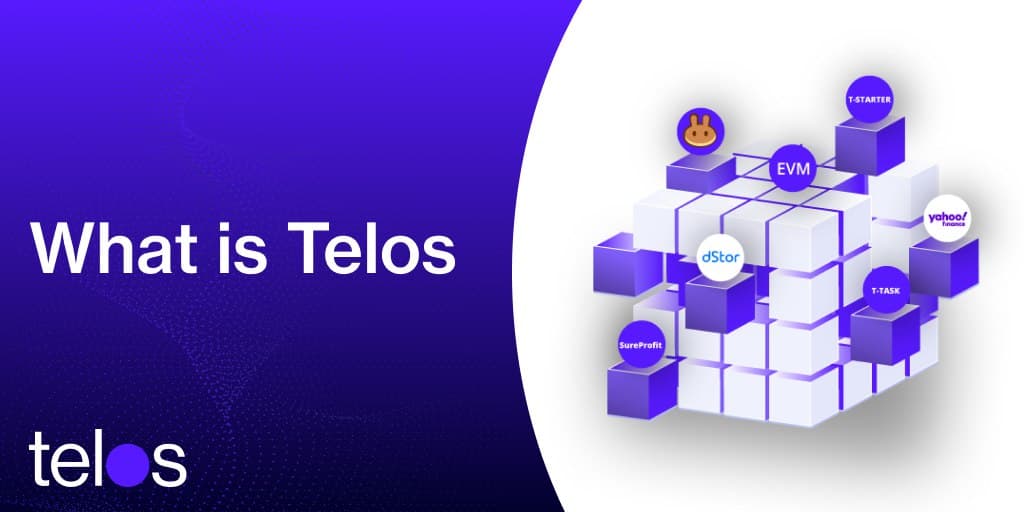 1). The Product - The Telos Network | The Blockchain and The dApps
2). The Tokens (The Native and the ERC20)
3). The Community (The Telos Foundation, The Block-Producers and the Core Developers)

The Telos Network | The Blockchain & The dApps

Since launching its mainnet in December 2018, the Telos network has been developed to power the economies of the future and provide human-scale solutions to global challenges. With these goals in mind, it includes innovative governance features that empower organizations to shift influence and decision-making to a more collaborative and transparent model.

The main features of the Telos ecosystem include:
Economic and geographic decentralization to ensure the security and safety of the chain.

Telos is an open network, where everyone has an equal opportunity to contribute and impact to the direction of the chain. 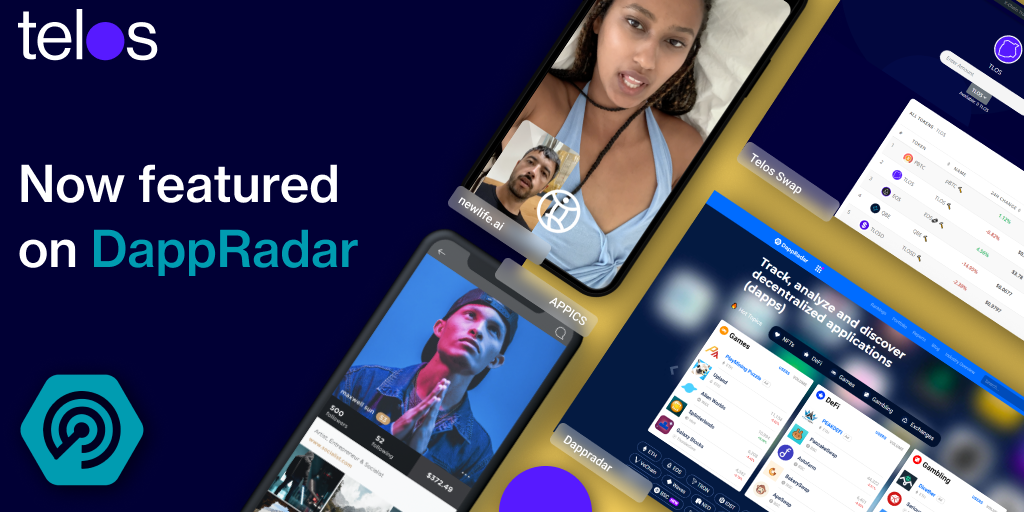 Developers are working to build over 100 distributed applications on Telos as of early 2021, including the music rights-trading platform Zeptagram, gaming platform QUDO, Social media platform Appics, and the payments system Sesacash. A full list of dApps on Telos is available at https://telos.net/explore/

The Potential Index of Telos Compared to similar chains: 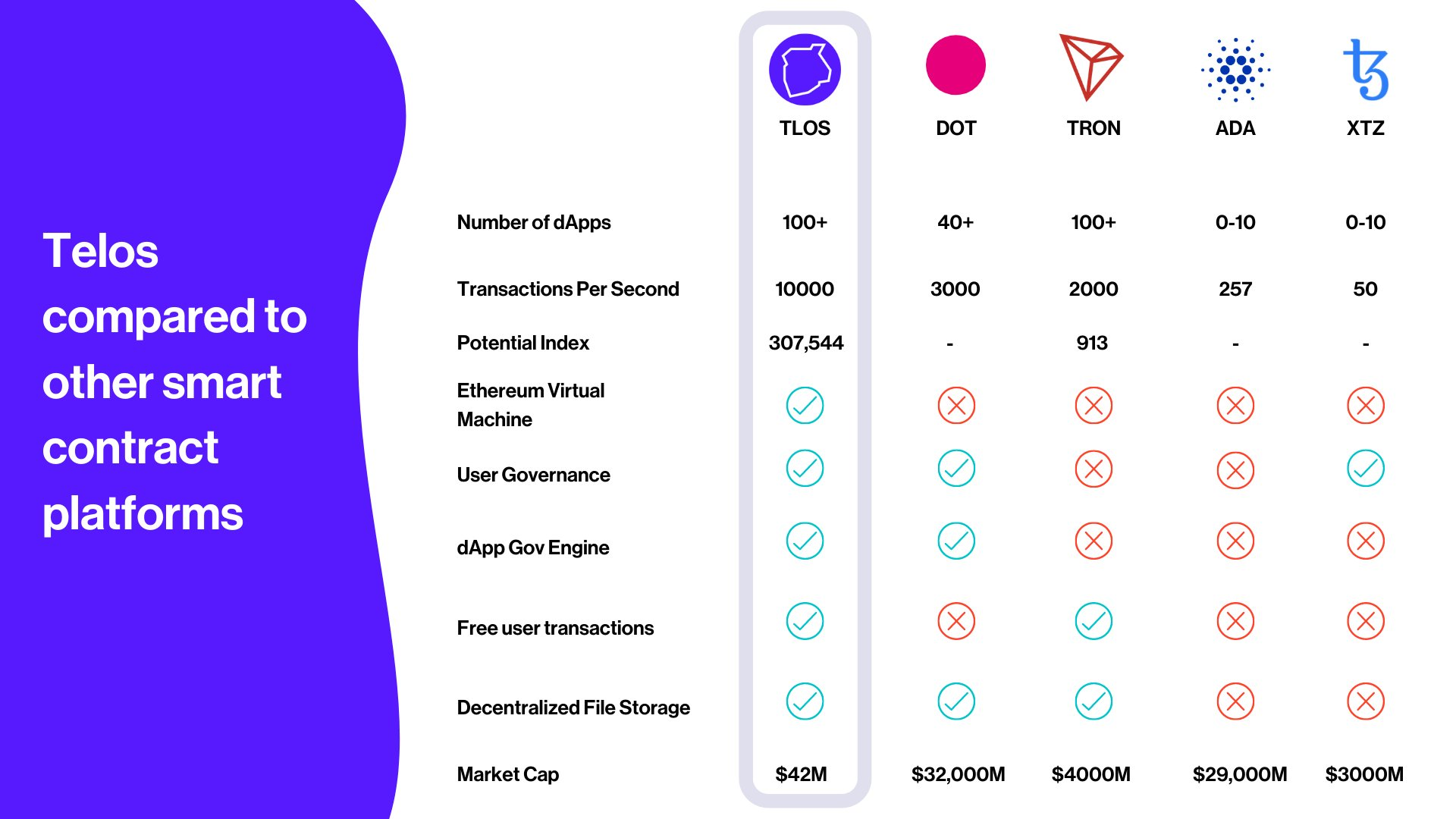 The Telos' Edge among other similar chains:

The additional validator accountability on the telos blockchain measures include:

No transaction fees incentivizes user adoption
On proof-of-work (PoW) chains, such as Ethereum, users must pay a transaction or “gas” fee for every action on the network. So for example, if a user was to ‘like’ or ‘share’ a post for example on a dApp which was built on a POW network a ‘gas fee’ would charge for that single action on the blockchain to the user. With the internet offering free access to many resources this gas fee hinders widespread adoption as users are used to using centralized applications which usually do not charge users for doing basic tasks or transactions.

Unparalleled Speed and Scalability
Delegated proof of stake allows Telos superior scalability when compared to traditional proof-of-work networks. Currently, the Telos blockchain can process over 4,000 transactions per second, and that capacity grows with code updates, sidechains, and other growth mechanisms. This kind of transactional speed puts Telos on par with centralized entities such as Visa and Mastercard and their ability to process thousands of transactions.

Low impact energy usage compared to traditional POW models
The EOSIO software, that the Telos Network is based on, is roughly 17,000 times more energy efficient than networks such as Ethereum. Proof-of-work models are time-intensive and require excessive amounts of computing power to solve complex puzzles. This allows these computers to “mine” the coins on the network that pays them. In POW the node operators are competing against one another to be the first to solve a complex puzzle with their reward being the newly minted token.

In contrast, the Telos Blockchain Network just requires the coordination of validators using the same software to verify transactions. The Telos token holders elect the node operators, with the top 50 dividing the rewards. The tokens are sold on participating exchanges, allowing anyone to own the TLOS tokens and stake them for resources. This system makes the mining process virtual. Since no real-world resources are being exploited and energy is not being wasted on massive server farms needed to solve the complex puzzles, this method is infinitely more environmentally friendly.

The Fastest and Busiest Blockchain in the world:
With 10,000 TPS (transactions per second) then this post will definitely make us stress out this immense capability that Telos has to offer the dApp developers. 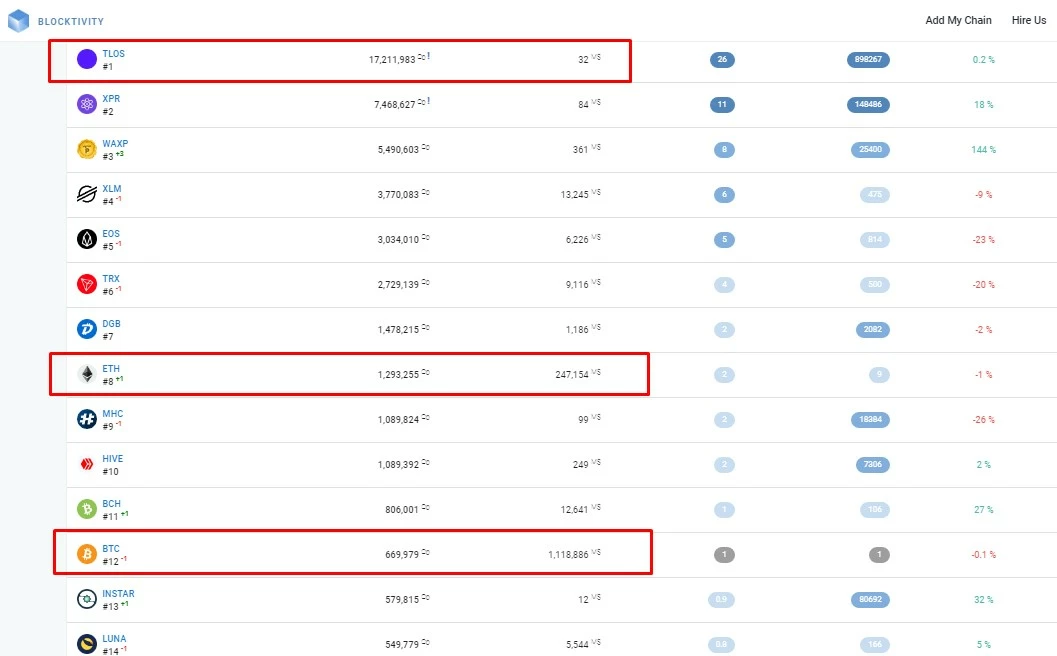 Source of this recognition is https://Blocktivity.Info

Aside from being the fastest, it is the busiest blockchain in the world. If you combine these two key elements necessary to describe the most powerful blockchain is, it would be The Telos Blockchain. 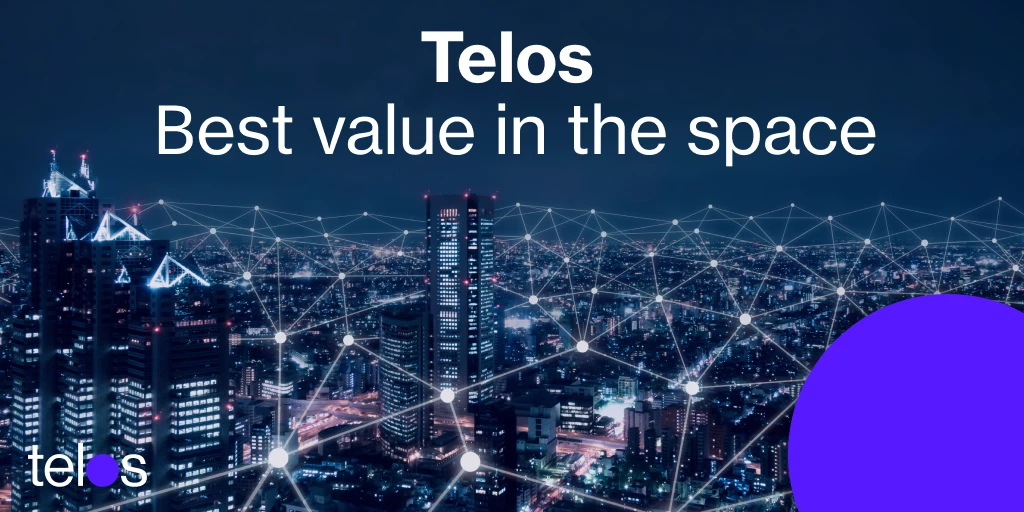 Let's pick some powerful products that we have which are a lot and will highlight a few today but will provide everyone with updates from our dApp developers from time to time. 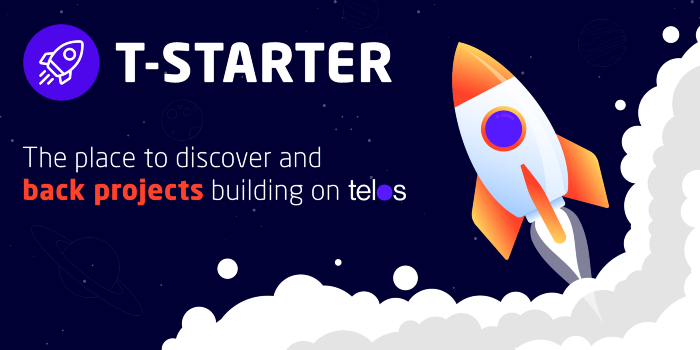 The latest blockchain boom has is coupled with the explosion in DeFi (Decentralised Finance). This surge in utilisation is coupled with surging gas prices and transaction backlogs in excess of 100 000 transactions on the Ethereum blockchain. As a result participation in DeFi has become frustrating and unaffordable for most users.

T-Starter combines cross-chain bridges and a fixed-pool swap platform to allow projects to raise funds more cost effectively than is possible on the Ethereum blockchain. The platform solves the problem of high gas fees which makes small value transactions unaffordable and excludes many users from participating if swap pools. The result will be wider participation and a far more cost effective token sale. Image source and context 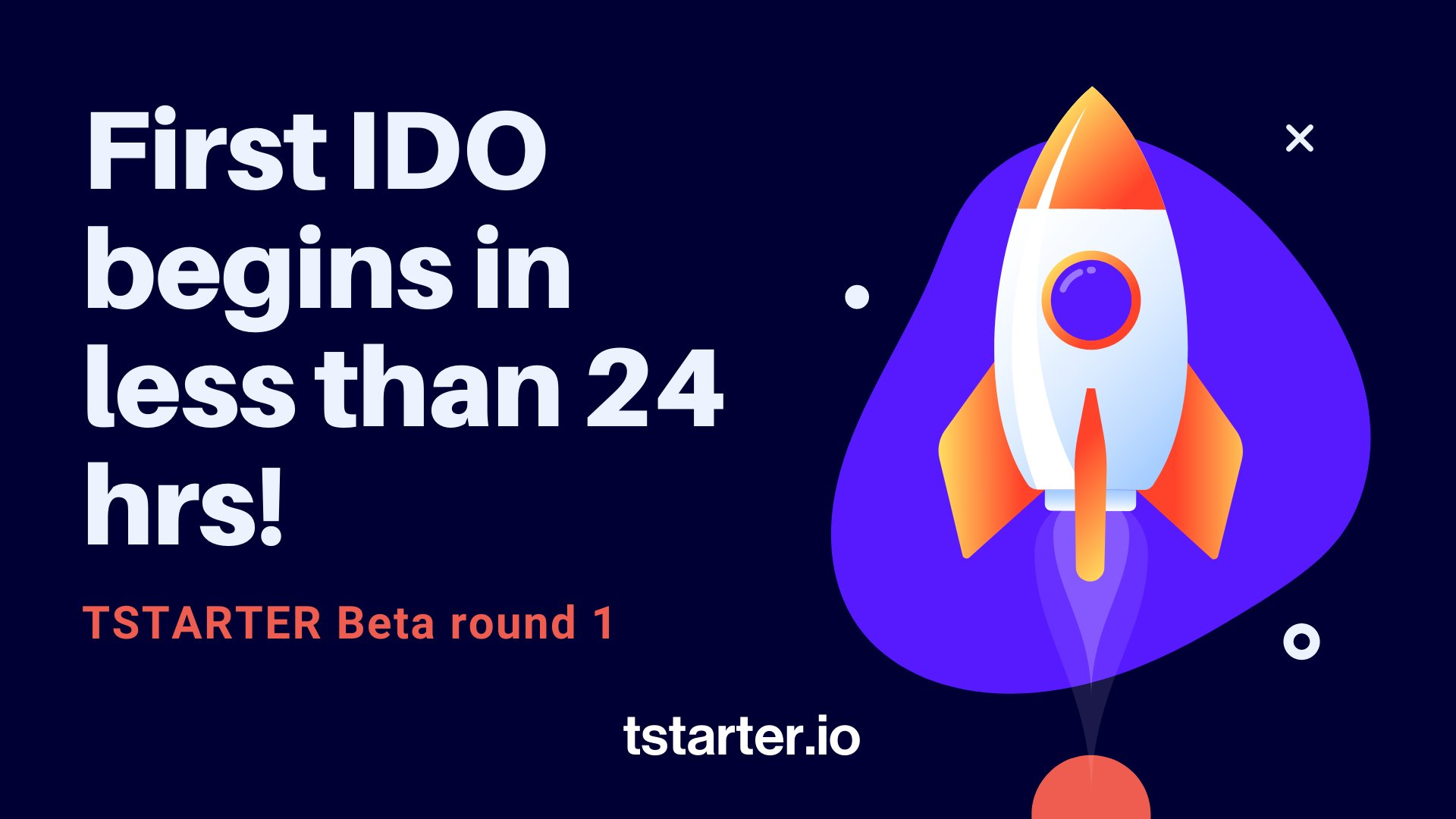 The first http://TSTARTER.IO (@T_StarterToken) IDO begins with the $START token beta round 1 sale in less than 24 hours from the time of posting. 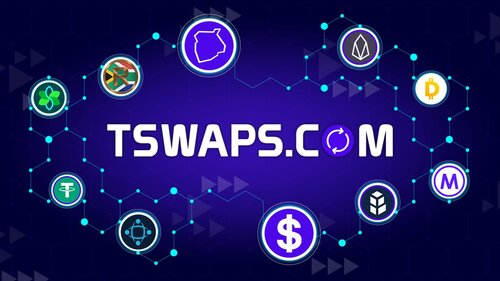 Telos token swaps allow for the exchange of any listed Telos token for any other Telos token using a simple swap interface. Users are shown an estimated result for the conversion before they execute the swap. Once initiated, an instant swap between the tokens takes place. Tokens are sent and received by the Telos account in the same transaction. Though this product may be included in the Tokens itself, it is still a dApp to consider. 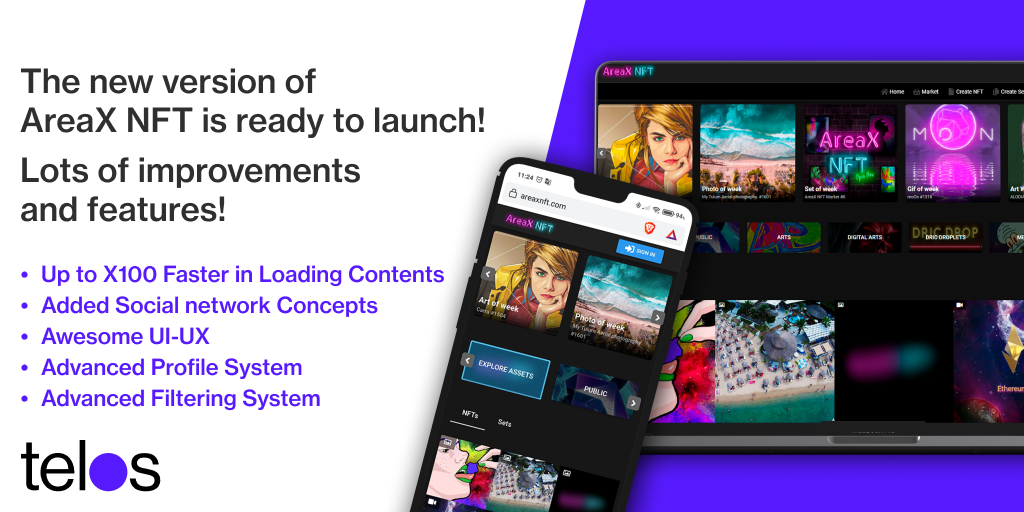 The World's Emerging Non-Fungible Token Marketplace.
AreaX NFT is based on Marble Standard. You can tokenize your asset easily and enjoy the AreaX gamification ecosystem. When you check the site, it is automatically on a dark-mode and you will be amazed with the remarkable minimalist home-page.

What is a Marble Standard?
A modular digital item standard for EOSIO software. Marble is an open-source token standard where contributions and improvements are welcomed by the community. To make a contribution, simply fork this repo and submit a PR for your changes. In order to avoid duplication of work, it's best to engage with the community first to determine what would be an acceptable addition to the standard.

And the marketplace is now supporting 5 more tokens.

Our community is also aware that Hive also has their own NFT being developed. This is the latest that we know from Hive: NFT Marketplace of Hive 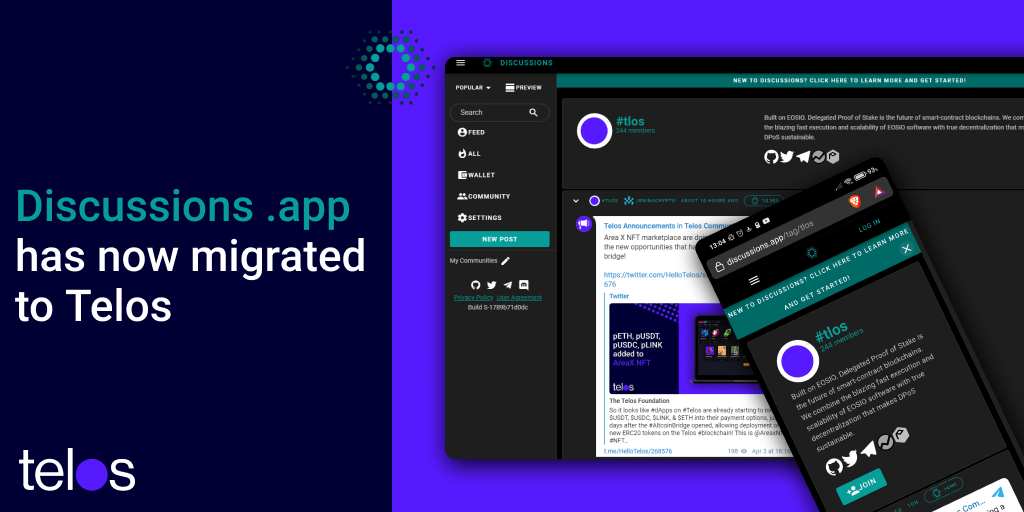 This is a social media network inspired by the internet forum Reddit that runs on Telos which fully migrated just recently. This is mainly used as a weekly discussion topic, the question of the day, or to engage to fellow users ideas collaboration. And of course a lot more. Users can be incentivized through different kinds of altcoins too mainly the ATOM token. 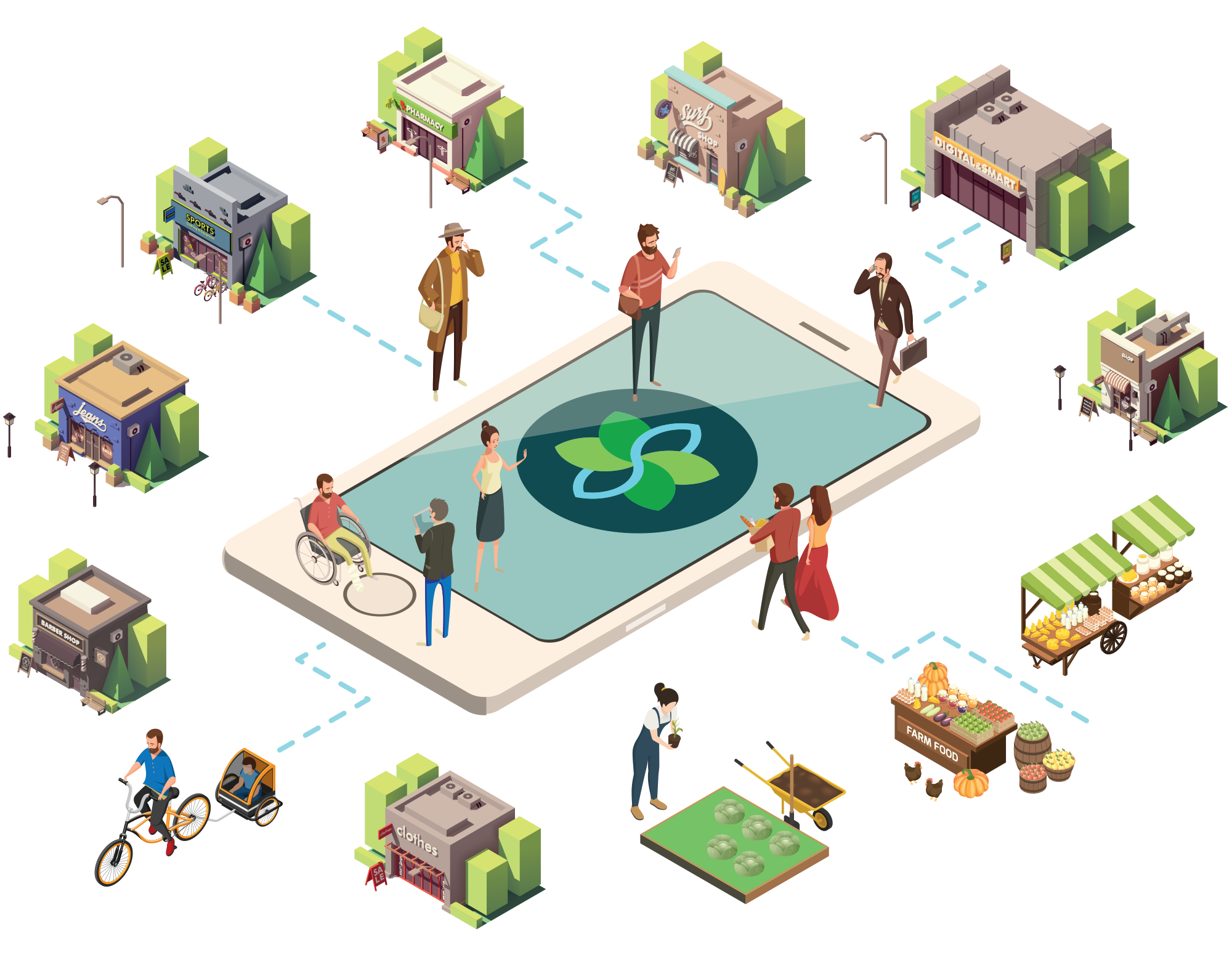 A payment platform and financial ecosystem to empower humanity and heal our planet. SEEDS isn't just a better way to pay. It's a solution to the greatest crises of our time.

It's a digital currency and financial system like we've never had access to before. One that serves, rewards and finances the people and organisations committed to creating a healthier and more equitable planet.

Crafted from systems that reflect the latest in financial, social and political innovation, SEEDS is the web that connects and nurtures a globally regenerative culture.

Qubicles is a Wyoming-based company with headquarters in Miami, Florida and Atlanta, Georgia USA. An award-winning contact centre software company, Qubicles has seen remarkable growth since its inception in 2017 due to its disruptive industry approach and implementation as a layered solution on Telos.

Essentially a cloud–based contact centre SaaS that includes a decentralised network of contact centre agents, Qubicles’ clients can take advantage of a vast network of professional customer service agents, leasing them for as long as they need them. This allows companies worldwide to scale up with demand effortlessly and at a fraction of the cost compared to traditional contact centre solutions.

Other mind-blowing products such as the EVM, dStor, TelosPrivate, and a lot more will be shared here on Hive!

Shout out to @jk6726 for tweeting our first ever post here on $HIVE. This move was extremely appreciated by the Telos Community and the Telos SEALS. THANK YOU! 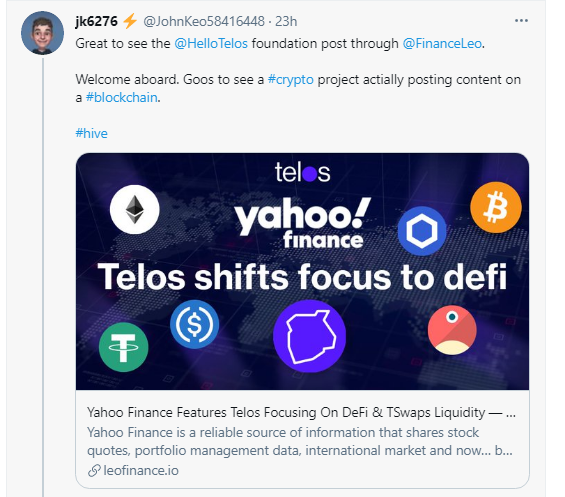