It Looks Like Bitcoin Bulls are Leading the Way But Has The Window of Opportunity Passed for Alts? 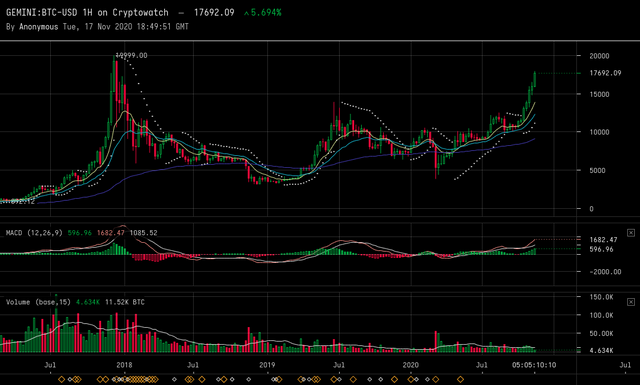 It's starting to like 2017 all over again right down to the time of year. The Bitcoin chart is starting to look really familiar. Anyone that has been around for awhile has seen this chart pattern over and over again. It's also one of the reason's you'll hear veterans say, HODLERS never lose.

We're not there yet, a lot of people bought the top in 2017. However, each day we climb higher makes the "HODLERS never lose" scenario much more likely!

One of the things I've noticed this time however, is that we're not seeing the same level of hype and excitement we seen in 2017. Nobody is really sure why exactly that is. There's very little press coverage, but we're starting to see a lot of big name institutional investors entering the space. There's reason to be excited and maybe a little reason to be scared as corporate money buys up BTC and drives up the price. That's the 300 lb elephant in the room nobody wants to address. I'm just pointing out the obvious for anyone that isn't paying attention.

If 2017 taught us anything, FOMOing in at the top is always a bad idea. HODLER's never lose may prove true once again, but how many people held for 3 years. I'll be honest, I lost a little in the danger zone trying to short the bottom. I'm sure more than a few noobs got really rekt either trying to short the bottom around 3K or just having weak hands and folding under pressure.

This is another reason why averaging down can be a good strategy. Buy on the way down and sell on the way up. I told friends and family when we dipped into the 3K range now would probably be a good time to enter. I got laughed at. Now people are asking again, just like in 2017 and I'm saying you should of bought at 3K when I told you! It's not an I told you so, it's how we trade! Has the window of opportunity closed for BTC, probably not. There is probably still room for growth. We could hit that ATH and see a record breakout. We could also bounce off all time highs and see a record correction. I don't care who you are, at this point it's all speculation!

So Where Does This Leave Alts?

Again, I feel if you weren't averaging down during the bear market, you missed a great window of opportunity to fill those moon bags. Has the window closed? Again, I can only speculate. One of the things that's really bothering me this time around is the lack of excitement. We have so many projects that are seeing active development and accomplishing great things, yet there's very little excitement outside of the DeFi markets. I'm not sure what that means, but it bothers me a lot! Frankly, at times it keeps me up late at night over analyzing it.

There's still plenty of room for growth in the alts markets. So many projects fell below all time lows in the bear market. A lot of coins started following BTC on the way up. Most of the coins in the top 20 have slowly risen along side king BTC. I averaged down with most of the coins and I'm now looking at exit strategies with most of my positions in the top 20. I'm trading a little of the volatility and I'm pretty much done adding to my bags.

As far as alts outside the top 20 I'm looking at strong projects with active development and use case that haven't pumped. IMHO this is where the real window of opportunity is still wide open but there is also much risk! I'm loving HIVE right now and everything that's happening in this community. I'm also stacking DOGE, XLM, XRP, SIA and a few others. None of those are financial advice, and I'm not shilling coins, that's just what I'm focusing on personally.

I am going through some of the larger alt exchanges looking at projects that I know are active with development and strong community. I'm looking for beat up charts with flat bottoms. Seeing if there's community and any excitement or continued interest in the projects. Most important if there isn't usecase outside of speculation, I'm staying away.

Honestly, I think there's a lot of room for growth in the alts markets but I also feel there are a lot of reasons to be cautious. If BTC bounces off that ATH and begins a correction we could see complete devastation in the alt market. Many gains could be wiped off the table and if it looks like we're entering another crypto winter it could be a bloodbath.

On the same note we could see many of these smaller alts start following the rise of BTC up like we did in 2017 into 2018. What bothers me here is both the lack of excitement and the lack of solid exchanges they're traded on (Cryptopia and other hacks were devastating to a lot of the smallcap alts and many midcap projects too).

I think a lot of what happens with alts will depend on what BTC decides to do. If BTC breaks out and rockets past the ATH, I'll be shocked if we don't see another round of altcoin madness. In 2017 I called it #CryptoInsanity I think a similar situation will arise. 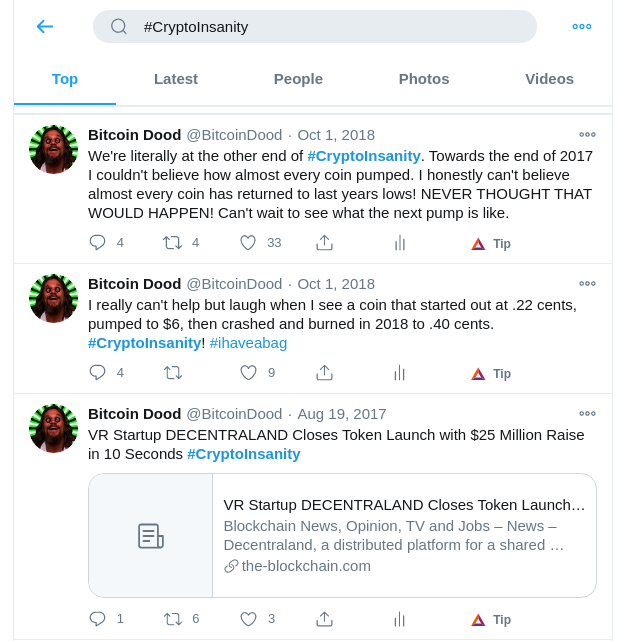 I'm still building a few bags right now in the top 20 but adding very little. I am taking some profits off the table when it feels right. Occasionally buying back on the next dip. I'm watching BTC closely because what happens next in alts will greatly depend on what BTC does! Any additional bag building will be lowcap and midcap projects with community, development and usecase.

Not everyone agrees with the concept of averaging down, but it's what has always worked for me. Buy on the way down, sell on the way up. is the simple motto I trade by.

Whatever you do pay attention, be careful and have fun! Happy trading.

Nothing here is meant as financial advice. Seek a duly licensed professional or financial advisor for financial advice, not some anon idiot on the internet who calls himself The Dood! This is merely what I'm doing personally and meant merely as conversation in a public forum. Trading cryptocurrencies come with huge risks and extremely volatile markets that could cause huge financial losses.In the spirit of full disclosure I have a position or stake in most coins mentioned