Bullish Or Bearish? Which Is The Easier Play? 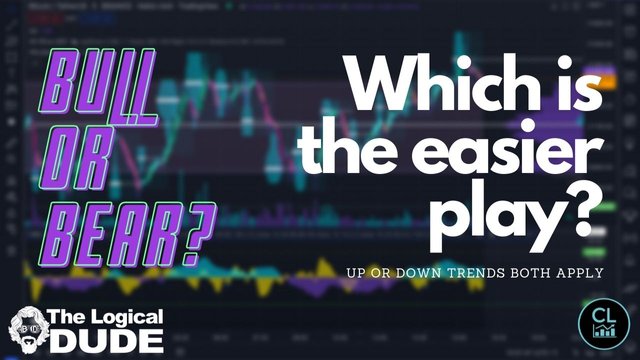 This isn't a trick question. There is actually an answer to this question. Now, you may say it all depends on the trend, and yes, you may be right to some extent. But I am going to talk a bit about why I think the easier play is to be a perma-bull even in bearish markets.

So you may be thinking, why are you going to be bullish in a bearish market? As it is smart to be able to flip and play both sides, I have found in my trading journey, that it is actually easier to be a bull, even in a down trend. Let me explain...

Price is moved by volume. The more volume, or orders, that are coming into the market, the more it moves one way or the other. Humans still run this market and most humans want prices to go up. Why, because it's more natural to make more money the higher the price goes versus having to wait for it to be pushed down.

If you think of an asset price like a ballon filled with helium, you know it will naturally want to go up. It takes effort to hold the ballon down. So thinking of it this way, it takes more effort to hold the price down than just letting it rise.

When sellers are trying to push price down, it's like trying to keep a balloon held down from reaching the ceiling, or keeping the price controlled, until they get the fill at the price they want, then they let the balloon fly.

Here is a recent example... Actually looking at my current trade... 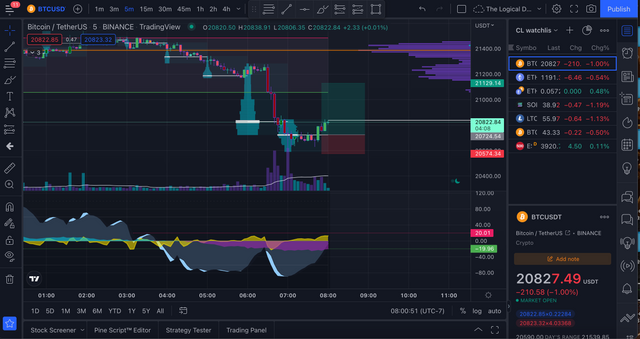 You see that the prices was hanging out for a while on the ceiling, or the high level of the current value area, and then the bears took over and started to push the price down. This was like pulling the balloon down from the ceiling and trying to tie it to a chair, haha.

You can even see that just before the drop, the price still wanted to rise a bit before they finally popped it. But after the balloon fell from the ceiling, it sat on the floor where it was refilled with helium and started to try and rise again.

Overall, I have found that it takes allot more effort to be a bear than to be a bull, even in down trends. Now if you can figure out the directions and let them play out, it IS good to know how to play with both costumes on, but it takes way less energy and stress to put on one costume and play the game as one character and let the price come to you.

If you are new to trading, there is so much to learn, that it is easier to focus on one strategy and playing it out. For me, I like to put on my long horns and be a bull, even in bear markets. I just simply wait for the move to play out, sometimes may try to scalp some of the downside, but I do not play shorts out for too long. Take your profit when you can before the balloon decides it's time to fly again.

To show you an example, here is the same chart just updated a few minutes later... The balloon started to rise, was pulled back down slightly, then the bears started to lose their grip of the string. 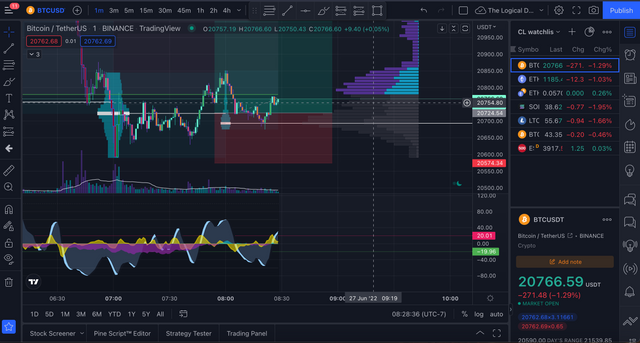 Be Patient And Let The Trade Come To You

This is the most important lesson anyone can learn in trading next to leaving your emotions at the door. Don't go and chase a trade thinking you are going to catch some gains in the middle of the move or in most cases of FOMO, or fear of missing out, you end up buying the top or the bottom of a move and it decides to go the other way.

This is why that even in bearish down trends, it is easier to wait for the drops to happen, long the dips and let the balloon head to the ceiling, then take your profits and wait on the next move. It's really that easy.

But of course this is something I have had to learn the hard way, so take it from someone who has paid the market tuition and learned the lessons. That saying, for this dude, it's much easier and way less stressful to be a bull even in bear times. My profit and loss margins have been helped by this as well!

Nothing said is financial advise.

This is for educational and recreational purposes only!

Stay safe in these volatile markets and don’t get rekt!

Follow us on HiveHustlers.io and LeoFinance.io, both on the Hive Blockchain:

Videos by @thelogicaldude are posted to 3Speak through his account and posted to the Coin Logic TV channel on Youtube.

From the macro point of view, the price of everything is expected to go up in the long run as the productivity of civilization increases over time. That’s why bulls are right most of the time.

This is also true. It really kind of works for all time frames, lol.

It is easier to be Fearful (bear) than being a super positive Bull.

That is just the way humans are wired !LUV

It’s also allot more stressful to be fearful. I don’t agree that it’s how all humans are wired, it’s how we have been programmed.

Yep. It is easier to follow the crowd. That’s why many loose money here. To win here one must go against the crowd. Buy when others are fearful.

Be Patient And Let The Trade Come To You

This is usually golden whenever it occurs

I mean like I said, it's good to know when to flip, but allot of times, you can get rekt trying to short when the price is lifting the other way. I also do allot of short term trading so in this case it's easier to predict a pump as consolidation happens. You can see where price wants to be defended by the bulls and is being absorbed by the bears.

Personally I have just had better luck going bullish than bearish, even in playing down trends.

I’ll be on the lookout for your trade moves