Today's silver coin is one of the most recent and coolest additions to my treasury, a 5 drachmai minted in 1833, just a year after modern Greece was established and officially became independent from the Ottoman empire. 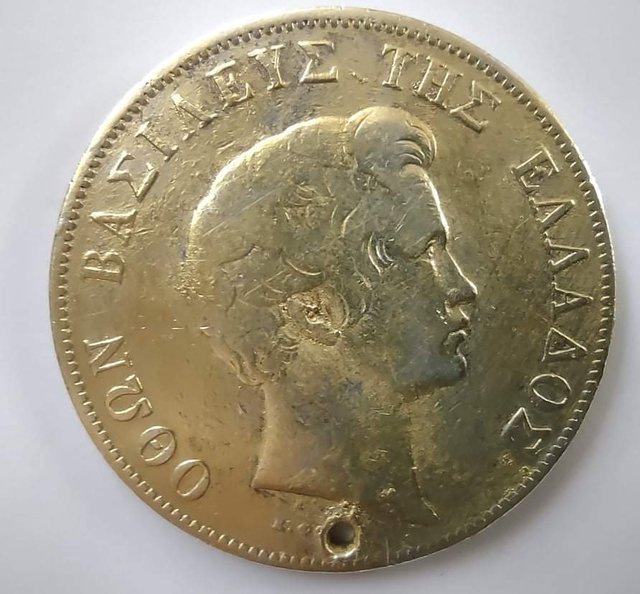 On the front side we have King Otto, or
Otto of Greece, the first king of Greece. Imo a good fella that was never loved by the Greek people much..Oh well.. 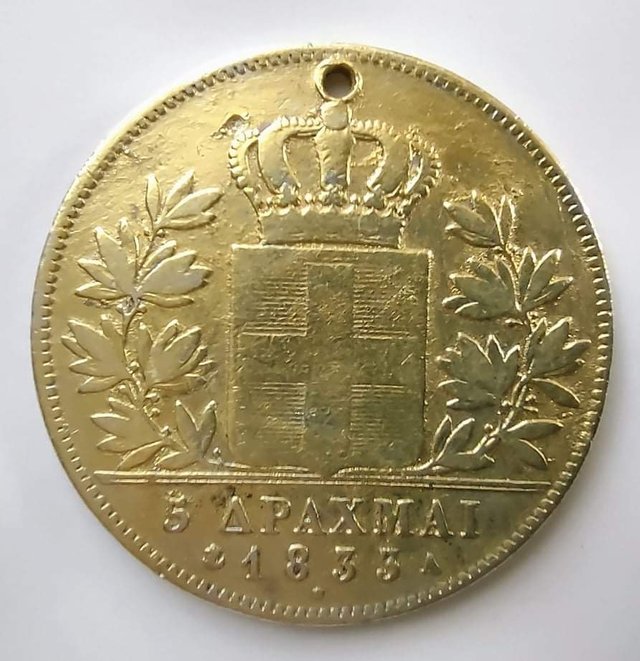 On the other side we have a greek crowned coat of arms with olive branches, 5 ΔΡΑΧΜΑΙ for 5 drachma and the minting date (1833). 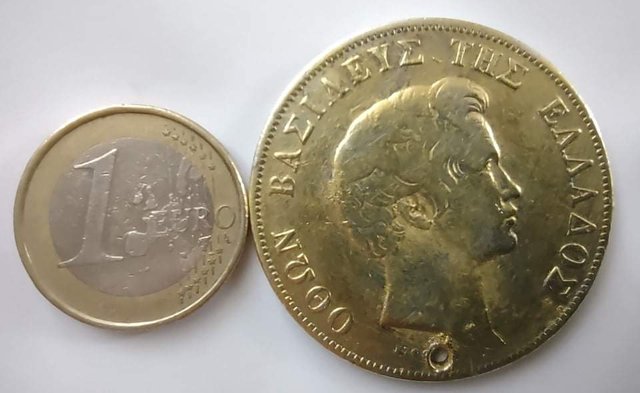 As you can see the predecessors made some modifications before it reached my hand. Specifically, a hole (probably for wearing/jewellery purposes) and plated it with gold. It's ok, I still love it <3

Very interesting. I bet this coin has a story to tell.

The numbering is all in tact and I was wondering about the colour.

too bad it has a hole in it

You have three and still somehow manage

Your collection is getting larger, I haven't heard of Turkish coin, it's probably the first time I'm seeing one. Silver is silver

It's not Turkish is Greek lol. Otto was from Bavaria

Oh my! I thought Otto was Turkish

Not bad this otto.

He is a good Otto!

You can string them all... those silver with holes in them.
And it will be so nice!

String them, wear them in my neck and walk out naked!

You can present them here all strung up!
That would be so cool!!!
👍😝

A really nice big coin. The condition is so good considering the age. The color is great too !

Interesting coin. To bad it’s got the hole drilled in it. But it’s still silver.

It's ok, thanks to our the premium was minimal 🥰

Lol about the king and another coin with holes.

The best thing about it is how well the condition of it is.
No extreme tarnishing has happened ..

Another impressive Greek coin.
And a 'Holed' one too, almost suggesting that previous owners didn't have pockets.
So, you gonna string all your 'Holey' collection together and wear your Silver?
And !PIMP out?

thepimpdistrict
2 mo
You must be killin' it out here!
@kerrislravenhill just slapped you with 1.000 PIMP, @trumpman.
You earned 1.000 PIMP for the strong hand.
You can still slap 1/1 more people today.

I wonder why they did the hole below the neck to hold Otto upside down while wearing around the neck.
I also feel it was chromed to glitter a little.