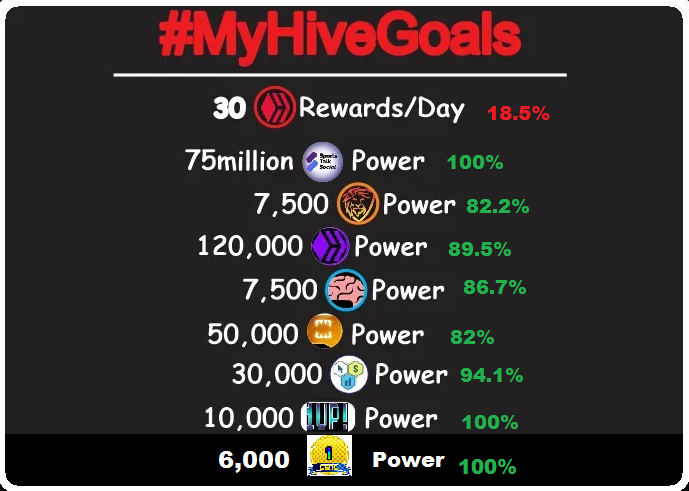 It's just Five (5) days to the end of year 2021 and looking into my hive and hive-engine portfolio goals for December and of course for 2022, it looks awesome that the target for 3 out of 8 tokens have been reached and in the next Five days, I'm sure that I would have successfully hit 6 out of 8 hive-engine targets.

At the beginning of the month, #MyHiveGoals post was targeted a Buying the Dip to Fill my H-E Token bags and the month has been awesome as I successfully took advantage of the growing Hive market and dipping hive-engine token market to my very best interest. I've pushed in over $300 in tokens stake and over $300 in dieselpools that may be retrieved to complete my staking goals for the year.

Why I'm I investing in Hive-engine tokens instead of Hive itself?

Many have asked this question and my single answer is that I'm already in the future. Hive communities and its tokenization is the robust future of Hive especially if one can discover tokens with hive potentials when they are yet very cheap and almost worth nothing. SPORTS and LEO would always be my perfect example. I bought inton them when they were about 0.1% of the present value. THis also happened when Hive was no where around $0.5.

Buying into the longterm mindset were my greatest wins as far as these investments are involved. For emphasis sake, I joined Hive with no dime safe my data and time and all the investments were first earned from posts and engagements before investing a part of it into second layer curation. many content creators are unaware of the fact that when Hive and the hive-engine tokens bears is the best time to earn more author rewards. That is, each time Hive dumps, you will have some more HIVE from HP exchange on the posts rewards. However, when price bulls, only a few HP or Hive can be derived from a particular HBD worth of the post. This is because HBD is meant to be fixed around $1 while HIVE can fluctuate from $0.5 to $20 or more deviation.

It's amazing that I'm running closer to the the $1 million stake target on daily basis. I'm sure that by the month end, I would have been able to give at least more than $5 in a single 100% upvote with all the tokens. That would mean $25 daily curation income and $750 at the end of the month.

Rising through these stake were not easy. So much discipline had been put in.

Hive-Engine is a smart contract platform on top of the Hive blockchain. It allows communities and businesses to build their own tokens, which are then built on top of the technology provided by Hive. This is the ultimate layer 2 solution. The token created on Hive-Engine is then immediately tradable with Hive on their exchange.

I am a called teacher, a serial entrepreneur and a Graduate of Agricultural Engineering. Nigeria is my root and a place full of opportunities. I dropped out of a Master's Degree programm due to funds, yet I do not regret growing the courage to start my business from the scratch. Today, I've built layers of Businesses on the Hive blockchain in terms of Curation and it's a sustainable passive way of earning crypto while learning.

Congratulations on this huge height. I already have target for my 2022 especially when it comes to Hive tokens. Let's see how it goes

Congrats, Seeing this post, i am going to also create my hive goals for 2022.