This beutiful supports from ETH and HIVE is already having many eyes on the LEO token as it's making new ATHs with HIVE's move to $0.33. Spotting LEO on $0.863 value on Leodex only spells that we're just few days from a $1 LEO. Indeed, I see it happen before the end of February, 2021. 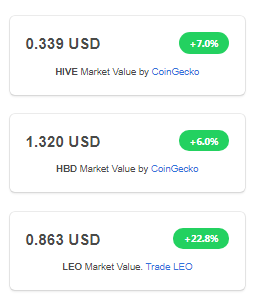 I remember talking with @Taskmaster4450 on Leomarkettalk that we'll have a $! LEO in just a few weeks and it was a decent discussion. Then, we didn't see HIVE's bull, all our anticipations was via the #ProjectBlank's airdrop announcement which will cause many to buy and power up some more LEO to be able to qualify for more BLANK which is already underrated before launch. I am very bullish about #ProjectBlank which is what informs my stepping up of my engagement game and as well calling it a TwitterKiller dapp.

As I pen this post, the market capitalization for LEO is about $5,232,674.45. I know @Mindtrap has already written about a 6 million LEO market cap., however, we see it scale to over $10 million in the next few days and then unto $20 million, and to $50 million and to $100 million. This can only happen on a project that is future oriented which is what informs it multi-chain linkages - a first to happen on Hive. I see more linkages happen in the coming months - $RUNE and $BNB.

And that's the precise moment where people who could see that something great was about to happen the following months should have started investing in LEO. Then, while it was still cheap...like 1 cent or so cheap... source

Reading Mintrap's post, I remember my early days of engagement on leofinance and being obsessed about it. Many people came to my Discord inbox to ask what I really think is awesome about LEo and all I could say is that is has a huge future even without the first Roadmap that came weeks after. Being a part of the start is always demanding in terms of responsibilities, yet, the joys of the future would make one forget those trying times.

The need for a cryptos to have cross-chain linking features become more clear as the day passes. At this crucial time that crypto is at the nib of breaking the line hindering mass adoption, collaboration should be of essence. All crypto projects should seek for ways to leverage the technology of one another blockchain just as traditional economies seek bi-lateral collaborations to expand trade and the value of the fiat currency.

At this juncture, the prediction does not consider the price action of LEO as a result of the internal operations of the LEofinance team as per burning tokens, giving airdrops and perhaps announcing another development which has been a major driver of the LEO price in the last 10 months.

Support LeoInfra's Onboarding Efforts by Delegating HP to @leo.voter (Currently at 2.5M HP). We Use this to Claim Accounts and Delegate RCs to Newly Onboarded Users