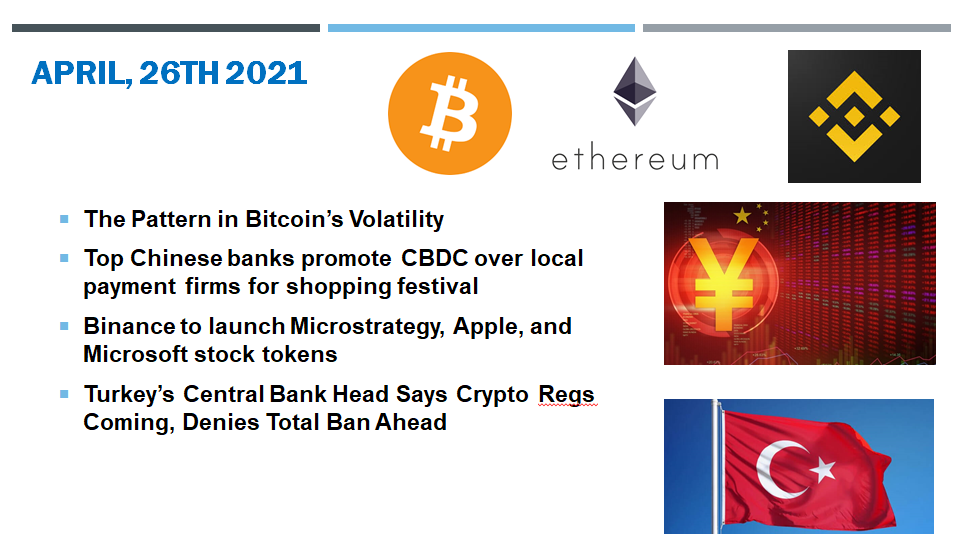 🗞 The Pattern in Bitcoin’s Volatility

Bitcoin’s volatility has been moving in a downward direction, and the price of the currency seems fixed in a band between $50,000 and $60,000. Is the current market for bitcoin (BTC, +5.97%) a temporary lull between lurches? Or is it a long-term trend toward lower volatility that could change the way bitcoin is perceived? The answer is, it’s too early to tell. The chart above shows bitcoin’s volatility has been on a steady decline. (Ether (ETH, +10.97%) and the S&P 500 are included as references.) However, it’s still in an approximate mid-range, historically.

Using the table below as a guide, bitcoin’s stretch of middling volatility is likely to continue. At 43 days, it is still rather young, as these things go. These ranges aren’t entirely arbitrary. Since October 2014, bitcoin volatility’s top tercile has been above 79% and its middle third has started at 51

Some of China’s largest state banks are actively promoting the digital yuan as a superior means of payment to the country’s two leading payment providers, Alipay and WeChat Pay.

In an April 26 report, Reuters revealed that six of China’s largest banks are promoting China’s nascent central bank-issued digital currency, or CBDC, in Shanghai ahead of an online shopping festival on May 5.

The report noted that one bank official appointed to CBDC trial’s rollout in Shanghai under the guidance of the People’s Bank of China specifically described the digital currency as superior to Alipay and WeChat Pay, who stated:

“People will realise that digital yuan payment is so convenient that I don't have to rely on Alipay or WeChat Pay anymore.”

The rollout of China’s digital yuan will allow the central government to gain control over a share of the massive troves of financial data that are being hoarded by the country’s top payment providers.

Top crypto asset exchange Binance has announced it will list three new stock tokens over the coming week, following the launch of tokens tracking the performance of Tesla and Coinbase shares earlier this month.

The tokens will allow users to trade fractionalized units of the share tokens, with minimum trade sizing set at one one-hundredth of a token.

The head of Turkey’s central bank ruled out a total ban of cryptocurrencies and said a wide range of crypto regulations is coming within two weeks, Trade Moneta reported. 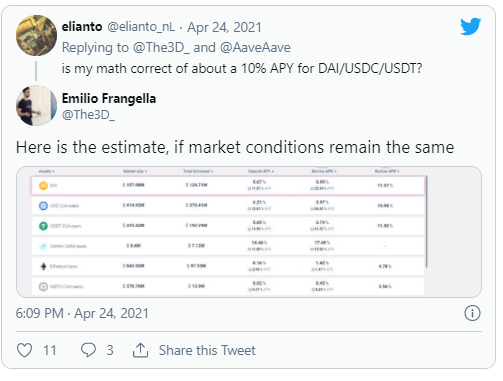 "It's exciting to announce #TomoFinance will be launched on 26th April!"