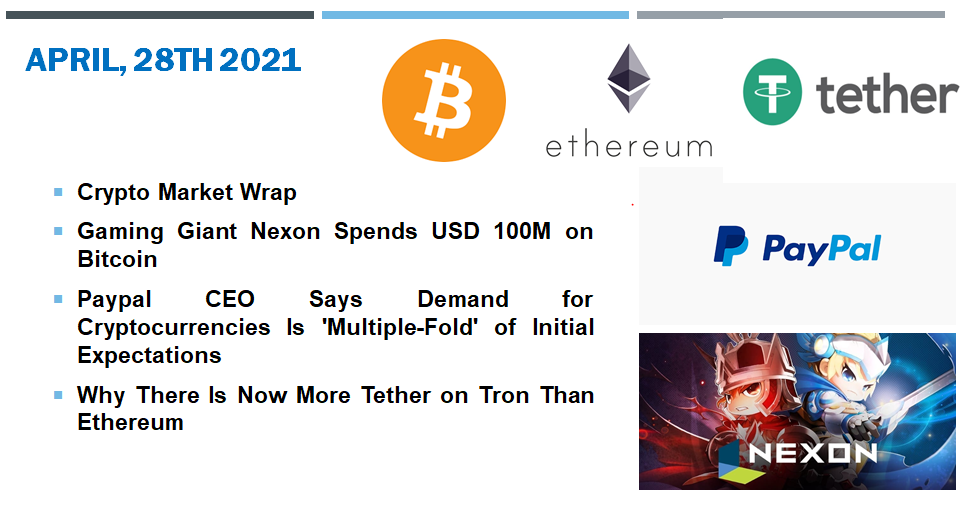 Bitcoin was up Tuesday despite lower-than-average spot volumes. Meanwhile, ether’s price hits record high and the cyrpto’s dominance is back at February levels.

“A test of the $56,000 mark will soon follow, then will most likely roll back,” said Constantine Kogan, a partner at investment firm Wave Financial. Ether rose Tuesday to a record high price near $2,700 after a powerful three-day rally.

The new high came after three straight daily gains totaling 19%. The move extended the cryptocurrency’s stunning rally this year. Ether’s price has tripled thus far in 2021, in part thanks to trader enthusiasm over growth in decentralized finance (DeFi) and non-fungible tokens, both of which use the Ethereum blockchain. Bitcoin (BTC), by comparison, is up 89% this year.

This purchase represents less than 2% of Nexon’s total cash and cash equivalents on hand (as of December 2020), they added.

"Our purchase of bitcoin reflects a disciplined strategy for protecting shareholder value and for maintaining the purchasing power of our cash assets,” Owen Mahoney, President and CEO of Nexon, was quoted as saying in the announcement.

According to him, in the current economic environment, bitcoin "offers long-term stability and liquidity while maintaining the value of our cash for future investments."

The CEO of payments giant Paypal, Dan Schulman, has revealed that the demand for cryptocurrencies has been “multiple-fold” of his company’s initial expectations. Paypal’s Venmo recently began rolling out cryptocurrency features to enable Venmo users to buy, sell and hold cryptocurrencies, including bitcoin.

Paypal CEO Dan Schulman talked about cryptocurrency, particularly bitcoin, in an interview with Time Magazine, published Sunday. Paypal is present in more than 200 countries and deals in more than 100 currencies. Last year, the company processed 15.4 billion payments, with a value of $936 billion. The company has about 30 million merchants in its network.

Schulman began by sharing his story of how he used Paypal’s crypto service to buy boots and paid for them with bitcoin. Noting that it only took a few clicks and a few seconds to buy with the cryptocurrency, he said that “It was pretty cool.” A big initiative of his company is “helping move digital currency into the mainstream, by adding cryptocurrency services,” the CEO described.

🗞 Why There Is Now More Tether on Tron Than Ethereum

Tether, the most widely traded crypto asset in the market (even more than Bitcoin), yesterday hit the $50 billion mark in terms of market cap. It’s an impressive milestone for the controversial stablecoin: just in February it stood at $30 billion.

What’s more, there’s now more Tether (USDT) being used on Tron’s blockchain than on Ethereum: $1.6 billion-worth more, to be exact. Right now, the amount of Tether on Tron is $26 billion; on Ethereum it is $24.4 billion, according to Coin Metrics data.

Nevertheless, on-chain data demonstrates that the coin is extremely popular, especially in Asia, according to crypto tracing firm Chainalysis. It remains the most widely traded cryptocurrency by a considerable margin.

Those in the cryptocurrency world use Tether because for a number of reasons. But it is mostly useful for exchanges. Tether trading pairs (i.e. Bitcoin/Tether) are a common way to denominate prices in fiat currency, like dollars or yen, as it is easier to get your head round.

Steve Kokinos (Algorand CEO) is a guest speaker at the inaugural DMI Symposium.

"Join us for the grand opening and launch party of the brand new Atari Casino in Vegas City with over $10k USD in prizes, free..."