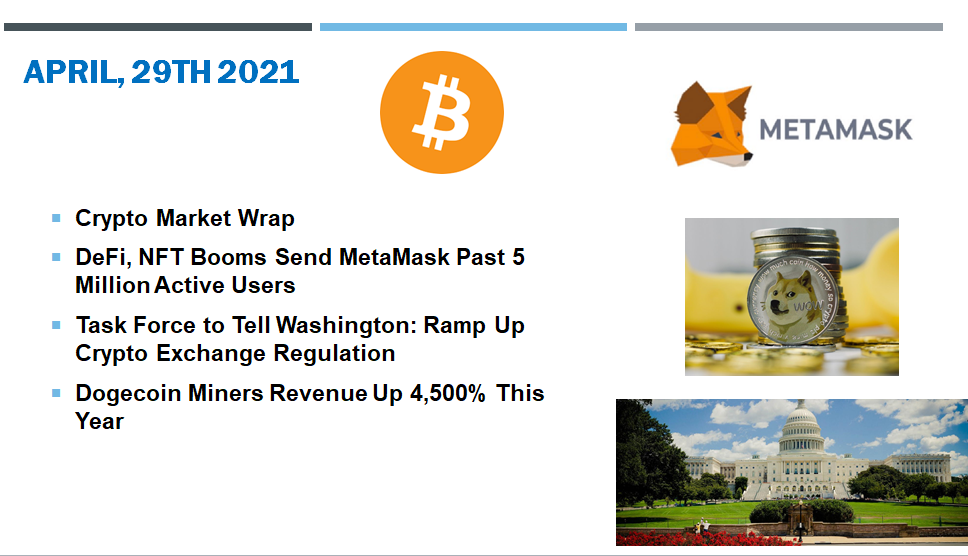 Over-the-counter crypto trader Alessandro Andreotti says bitcoin’s stagnant market is due to investors continuing to explore other cryptocurrencies. ”Bitcoin has, in fact, gone up, but I see it as a consolidation move to a new price range,” Andreotti said. “It’s staying relatively stable right now while alts moon.” Total value locked in the Ethereum ecosystem has crossed $64 billion for the first time, a fresh high as investors plow more money into DeFi.

“Ether prices follow total value locked,” said GSR’s Rosenblum. “ETH is much more correlated to DeFi even though BTC is technically DeFi, too.” As of press time, 9.9 million ETH is locked in DeFi, worth over $27.1 billion. Meanwhile, 155,748 BTC, worth $8.5 billion, is parked in various DeFi apps.

MetaMask is a browser extension and mobile app that allows people to interact with decentralized applications (dapps) on the Ethereum blockchain via a wallet where they can store the keys to their tokens. Those dapps run the gamut from CryptoKitties and other NFT marketplaces for digital collectibles to decentralized exchanges such as Uniswap, where users can swap cryptocurrencies directly with their peers.

The 500% growth MetaMask has experienced in the last six months has been driven not just by DeFi, the project states, but also by NFTs. Short for non-fungible tokens, NFTs are unique digital tokens that serve as contracts of ownership; they’re commonly attached to digital art, virtual collectibles, and even MP3s. According to data site DappRadar, NFT sales took in $1.5 billion in transaction volume from January through March.

An advisory body will reportedly tell the American government to increase the level of its policing of crypto exchanges – with a new spate of anti-money laundering (AML) measures possibly incoming at trading platforms operating in the country.

Per a report from Reuters, the Ransomware Task Force, a public-private body made up of secret service officials and industry experts and charged with mitigating malware, cybercrime and other cyber-risks, is set to advise Washington that it needs to step up its regulatory game in the crypto industry.

The news agency wrote that the task force will recommend policy changes, and will likely advise extending know-your-customer (KYC) “regulations to currency exchanges,” as well as “imposing tougher licensing requirements for those processing cryptocurrency.” "In place of our regular Cardano360 this month, we are bringing you something extra special... Cardano Africa."

Join us next Thursday for a virtual Meetup open to everyone across the Holochain ecosystem!"

"SXP Will Be Listed on Coinsuper."

"The ability to auto compound on Pancakeswap platform will be live this Thursday."