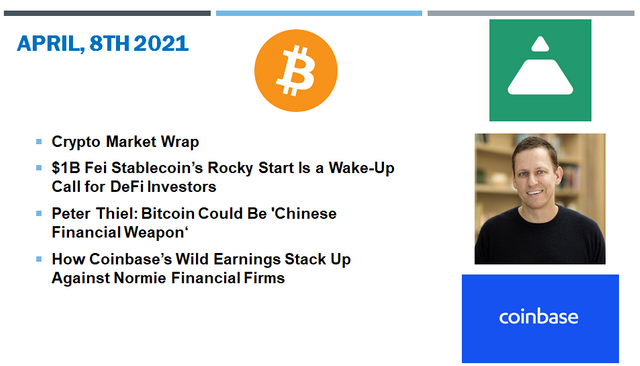 Bitcoin slid for a second day as the No. 1 cryptocurrency saw flat trading volume, typical of a rangebound market.

Bitcoin’s spot trading volume on eight U.S.-focused crypto exchanges tracked by CoinDesk was largely unchanged on Wednesday. The trading volume has been around or below $3 billion for seven days now. After having logged three days of gains, ether saw a price pullback Wednesday, slipping below $2,000 for the first time since April 3.

Other alternative cryptocurrencies (“altcoins”) also suffered losses, according to CoinDesk 20.

Analysts at the cryptocurrency data firm Messari have highlighted the so-called “Coinbase effect” where new digital tokens such as cardano tend to receive a quick price pump after they become available on the U.S. crypto exchange giant Coinbase.

The $1 billion Fei Protocol stablecoin project has gotten off to a very rocky start.

The most important data point is this: Fei was built to maintain a 1:1 peg with the U.S. dollar but it has not quite hit the mark over this first week of its existence.

Backed by major VCs, Fei aimed to create a stablecoin protocol that would outright buy assets with its token, rather than holding them as collateral for loans. It appears the team underestimated the demand it would see to participate in the launch. It also seems clear that many of those who jumped into the project didn’t understand Fei’s “direct incentive” method for stabilizing the price.

For the first few days FEI danced around a nickel to a dime off the target. Since yesterday it has tanked hard, now almost a quarter off its goal of $1, according to CoinGecko.

FEI'S MAIN TECHNIQUE FOR MAINTAINING ITS PEG TO THE DOLLAR NOT ONLY HASN'T WORKED, EACH TIME IT KICKS IN IT BRIEFLY MAKES MATTERS WORSE.

“It’s hard to make an algorithmic stablecoin stick to the peg, and mechanisms are nascent and experimental,” said Jake Brukhman, founder and CEO of investment firm CoinFund. “I don’t have much skin in the game on $FEI, but I am supportive of figuring it out for the benefit of science and the blockchain space.”

Here’s a simplified model of how Fei works to help illustrate. Imagine there’s a smart contract that simply says: input $100 worth of ether (ETH, the second-largest cryptocurrency by market capitalization) and the contract will issue 100 FEI to whatever wallet sent in the ETH.

PayPal co-founder and venture capitalist Peter Thiel, speaking at a virtual event for the conservative Nixon Seminar on Wednesday, opined on whether China is poised to win a financial arms raise with the United States.

"Even though I'm sort of a pro-crypto, pro-Bitcoin maximalist," Thiel said. "I do wonder if at this point Bitcoin should also be thought of in part as a Chinese financial weapon against the U.S., where it threatens fiat money, but it especially threatens the U.S. dollar." 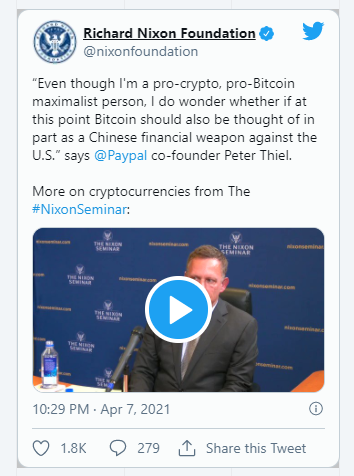 The question Thiel was ostensibly answering wasn't about Bitcoin per se, but about China's plan to create a digital yuan. Moderator Hugh Hewitt wanted to know if the digital yuan is a "threat to the dollar and its dominance of world markets."

🗞 How Coinbase’s Wild Earnings Stack Up Against Normie Financial Firms

Based on earnings estimates announced Tuesday, nothing else in the financial services industry really compares to Coinbase right now.

Wedded to the rising fortunes of cryptocurrencies themselves, soon-to-list Coinbase expects to make more money in the first quarter of this year than in all of 2020, and has seen an exponential rise in engaged customers.

Ahead of next week’s listing of COIN stock, the obvious question is whether the current quarter is an outlier or, as some stolid crypto believers may be thinking, the new normal. 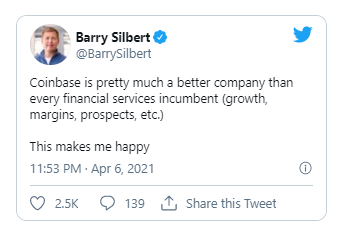 "A NGM/ETH Liquidity Pool will be created on Uniswap."

"Jay Zhang of VeChain will take part in this panel discussion looking at how blockchain solves food safety challenges."

"DEGO/BNB Liquidity be enhanced on #Pancakeswap by 8th April"

20% of this article rewards wil go to the @hodl-fund account in order to support HODL Community Initiatives.
Find out more about HODL Community: Crypto Social Community and by following our community account @hodlcommunity

Helps us by delegating to @hodlcommunity