Yesterday, I wrote here a bit about projects that have no use case and how they can become a big deal quickly but turn to shit eventually and have a hard time regaining their lost glory.

One of such useless projects I mentioned is Dogecoin. The meme coin has no value and is basically just a pissing ground that fuels Elon Musks' ego. It's a product of a joke and although it's currently valued higher than Luna at $0.89, it's way more useless until proven otherwise.

With these known facts, it begs the question of whether the creator of this shit toke, Billy Markus, is the best individual to listen to for crypto-related council.

In his recent tweet he had this to say about crypto assholes and scammers. 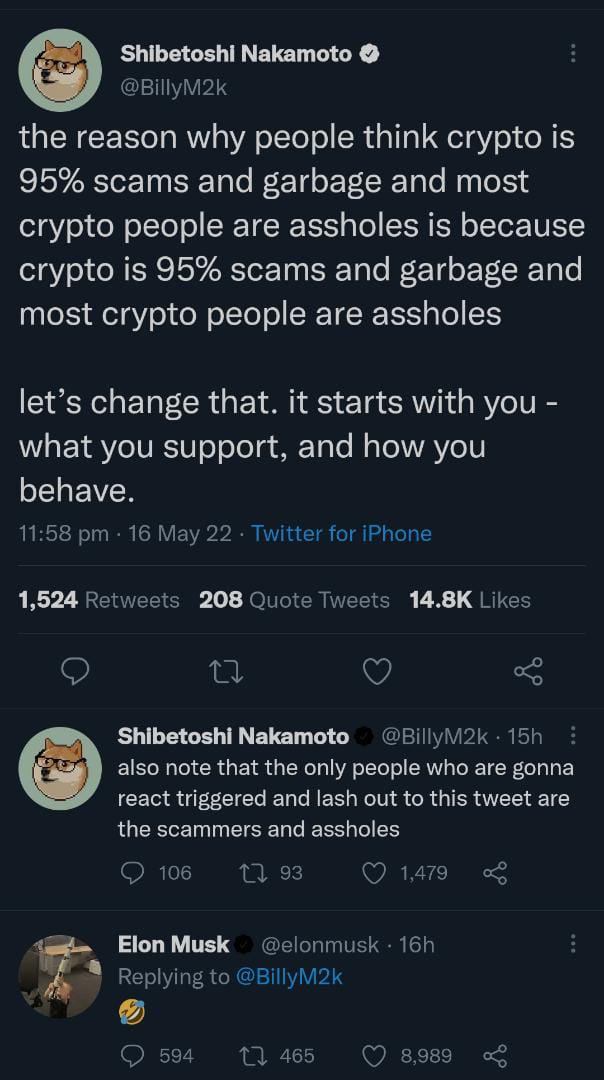 I thought that was a pretty bold statement coming from the creator of one of the most useless coins to ever gain as much traction as it did.

Now, what bothers me is the fact that useless projects like these that have absolutely no relevance gain the attention of market influencers like Musk and become relevant but we're almost struggling on Hive.

We have an amazing product with multiple uses that can accommodate pretty much everyone yet we haven't received a quarter of the amount of traction that we deserve. However, regardless of this, we still hold out during the rainy days.

While other stablecoins lose their stability and are basically staggering, HBD not only managed to maintain its position but a few moments ago, it was $1.024. If that doesn't say "futuristic" and "relevant" then I don't know what else...

I strongly feel like when Hive eventually takes its place as one of the best projects out there, it's going to remain in that position because it has gone through an organic growth process.

I hope I'll still be here to witness that day.

He was. But it was still funny coz he's one of the prominent assholes.

Yeah, I think crypto people can brash and dank, but I think that is a lot different than being an Asshole or a Scammer (crypto's most over used word)

Regarding being undervalued - I think we could support more value, but I think it is important to see why we might be slow to launch.

While we do have awesome products any successful financial endeavor has a lot of components besides development. Marketing, PR, Retention of Holders, in a highly competitive market segment.

The very tweet you mention is part of attracting attention and you will see many successful founders are always out there talking about crypto in general and we have no such reach coming out of Hive, it's okay, but it's a setback

I trolled Billy a little bit and he got buttmad and blocked me.

Honestly I didn't really troll him that hard, and I didn't even know who i was trolling when I trolled him. Basically, another memecoin beat dogecoin into space and we were trolling him about it and he got super butthurt and started blocking everyone. 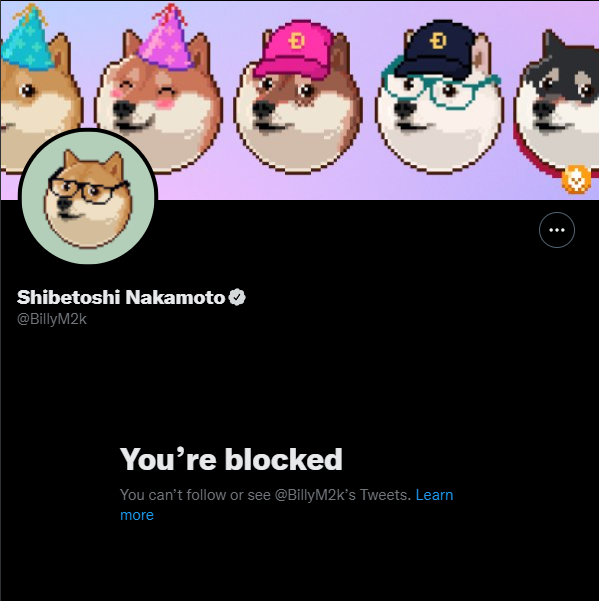 I'm sitting here alone at home. And this comment made me giggle aloud.

I read that a particular guy told him that $SHIB had more use case than Doge and he blocked. The guy is such a joke.

You seem like a nice person. So i wanna come at you with decency and respect. I'd say i agree with Billy Markus but i'd take it further. I'd say it's more like 97% of crypto is scam and assholes.

So this is not a gut feeling response. What it is based on is data collected by independent research teams that later filed the findings with the SEC that 97% of crypto trading is wash trading.. That means it's not real trading .. it's propped up nonsense. Which then means only about 3% of it is real.

The problem with that miss boss karin is that if the money isn't really there. What happens when i go to get my money is i find out it's not really there and the markets crash as they do quite often. Obviously due to a lack of liquidity. not really a problem so much with birtcoin.. still volaite but btc can absorb quite a bit which is why it's king although not perfect.. certainly better than all the alternatives.

There is a corelation between the assholes and scammers that leads to such events. I wouldn't totally knock hive because i'm aware it's given some people especially newbies a good first introduction to crypto in a more digestable way however the blueprint is somewhat impactful in the same way.

As to say, before i began working on wallstreet.. in college i recall going into these article writing jobs online that were said to be about 95% scams, lol. As they were often times it wasn't a job you'd write something they'd give you nickles and cents and most people would leave them as a waste of time. Now hive reminds me of those programs although i would say it being on a blockchain having multiple uses as you mentioned probably aren't going to be as significant as the blogging and that's because blogging is a bit more mainstream and that's why even the best app hive has still in comparison to your worse crypto is still volume wise relatively insignificant and that i believe is because you have more bloggers than gamers on hive or interested in the games on hive and the other apps.. Which is just the data.

Now obviously the answer is always going to lie in liquidity. how do you achieve liquidity. In my theory you achive it by growth. Growth is an indicator your product is of use and interest to the general populace.

The projects i've founded have in recent years their area attracted big names like Jack Dorsey, Elon Musk, Zuckerberg and even Vitalik has donated millions of dolllars into ubi programs or what i call the citizens dividend. That can attract growth and as well create a stable currency much of the globe can use and those are likely scenarios into the future.

Now the problem with hive is that it's kinda this in idea decentralized blockchain with no real direction to go per se besides where we take it.. So it depends on apps but in reality it's probably likely apps like mines will spark the audiences and conversations and my prediction donors of these type not only people but institutions which are needed to provided the liquidity and stability in reality.

So i'll close with this. Hive isn't the worse blockchain. it doesn't contain the worse assholes. What it does contain is a mechanism that magnifies and exaggerates the biggest of the assholes which turns people off. Of course i'm speaking about the influence system.

So although it i believe the best thing working for it is the idea of the free transactons.. The problem is the influence system is actually a barrier to entry. It's such a huge barrier that i predict that as many people show up here that many more people will leave here. So i'm not sure what the workaround to ath is Even my project can't completely solve that because it's multichain so it will come down to the chains and the people on the chains to decide which version of our project should be the focus on their perspective chains.. However a person who creates a sht coin to make money using market psychology to scam people doesn't mean they are disingenious.. it could just mean they are able to exploit the misgiving of others and use that to whatever end they so choose. Richard Heart of pulse chain created a billion dollar project that on purpose was formulated to look like a scam although it wasn't because the psychology of people in greed and shortsidedness of give it to me now has them go after scams for quick money. So it backfires they get left holding the bag. Although that may make Billy Markus unethical it doesn't make him a liar or stupid. It just means he's found a way to exploit other peoples weaknesses however i'm just glad he atleast admitted to the level of shitcoins and he should have did what charlie lee did and said himself included in the mix.

And that Elons emoji!

Well, dogecoin can now be used to farm yield on thorchain, it started a couple of months ago, so maybe, maybe we can permit Doge for a minute. But you see that Shiba inu, I never see nonsense wey reach am. After shiba, another big nonsense is safemoon

Lol not me, but around 495 people are

But yeah it’s pretty useless beyond that.

Sorry but I disagree with you, Billy.

Forget Elon and that guy, they're shilling Doge and Shiba, so they have to be clowns like the clown crypto.

Not all crypto people, just @penderis

I think psychologists call this projection.
I am no psychologist, but I think I smell some projection.
This is a good place to Take the High Road, smile, use my Inside Voice to say what I really feel.. and move on.