The Grand Crypto Crash of 2022 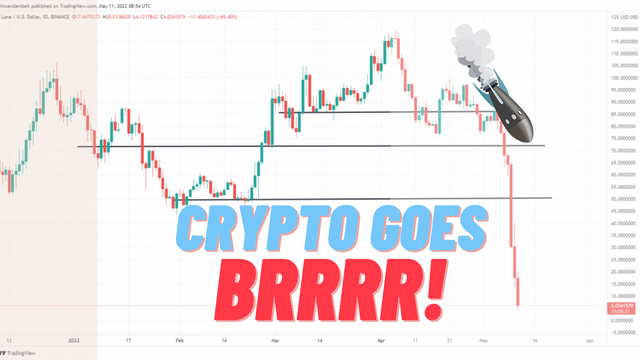 Cryptocurrencies are not invincible; they experience big falls over time due to a variety of factors. Individuals and organizations lose a lot of money every time a large crash is announced, and occasionally a price crash is more than simply the price of a coin or two; it may spell the end of a long-running crypto project. Let's take a closer look at the nature of the recent crypto-space instability and the dynamics that surround it. Let's get started without further ado.

Causes of the Crypto Crash and Expected Duration

The cryptocurrency industry is a complicated one that is influenced by numerous external and internal forces. We can't possibly know everything that caused the latest cryptocurrency price drop. Because of the complicated linkages between crypto micro and macroeconomics, this is the case.
However, I will concentrate on the more obvious and plausible reasons of the current events surrounding cryptocurrencies as much as possible. Let's get started.

The global economic consequences of the Russian-Ukrainian conflict cannot be understated. I've only recently realized how true it is that the earth is a global village, and that a harm to one is an injury to all.
This battle has caused unparalleled burdens and problems, causing not only personal misery but also the closure and extinction of certain well-established businesses. Apart from the military business in the United States, all other industries, both tech and non-tech, have recently experienced a huge setback.

Cryptocurrency, like the stock market, has been in free fall. The crypto finance industry has seen a series of adverse moves in both big and minor cryptocurrencies since the start of the dispute. There are no exceptions. This is to be expected, given that Russia and Ukraine are two of the world's most powerful economies.

Another explanation for the latest crypto meltdown could be the recent negative attention surrounding cryptocurrency. The most noteworthy of these is the collapse of the Terra (UST) stablecoin. This is a ridiculous proposition, as stablecoins were designed to be trusted as a more secure store of value than extremely volatile coins. With the collapse of UST, most individuals who own liquidity in other stable coins (such BUSD and USDT) may begin to doubt their reliability, which is frequently followed by withdrawal of cash. Other stablecoins have surged over their 1 USD peg, adding to the unpredictability of a theoretically stable coin.

The abrupt failure of the Luna project and its ecosystem, following the meltdown of the Luna token, has added to the negative PR and press surrounding cryptocurrencies. Being one of the most important cryptocurrency initiatives of our time, it's shocking to watch how billions of dollars might vanish in a matter of hours. Such instances cause a significant loss of faith in the concept of cryptocurrencies, and most investors believe it is safer to withdraw their cash, resulting in the massive bearish trend.

The Terra ecosystem's demise, as well as its currency, Luna, and stablecoin UST, is a major setback to the cryptocurrencies financial sector. This occurrence has a direct link to the present crypto instability, albeit not being completely related to it. We could say that there is a statistically significant association between the two events.

To realize the relationship, one must first comprehend the Terra ecosystem's importance in the crypto sector (cryptoverse). Terra was one of the top ten most important cryptocurrencies and crypto projects, and because of its prominent position in the cryptoverse, it might be regarded a crypto ambassador, with any changes influencing the entire cryptocurrency ecosystem.

Another thing to keep in mind is our human behavior (we are ruled by emotions). We all desire credibility, and with the terrible demise of the Terra ecosystem and its currencies, not only the Terra ecosystem, but crypto in general, has lost its credibility. With these events—the loss of a stablecoin and an entire ecosystem based on cryptocurrencies—it is difficult for most people to trust cryptocurrencies again, as evidenced by the sell-offs and subsequent decline in the crypto market's volatility.

Cryptocurrencies as a whole are analogous to the human body. Unlike the human body, crypto projects are really not necessarily physically related to one another. The human mind is the one who connects the dots.

Because of how this catastrophe damaged people's trust in key crypto projects and trust placed in stable currencies in general, the Terra ecosystem breakdown had a crucial influence in current crypto instability. This occurrence literally drove many away from the bitcoin field because it was both disappointing and a betrayal of people's trust.

The terrible failure of Terra just added to the reasons why people should be wary of crypto, and the ripple effect can only be felt throughout the market, just as an impairment to one portion of the human body can have an ill effect on the function of the entire body.

Will Luna ever bounce back?

Luna is currently more or less a shitcoin, as Terra, the corporation behind Luna, appears to have been legally shut down by its CEO. With this in mind, it's best to approach Luna with the same eyes that you'd use to approach projects like Shiba Inu, albeit it appears that Shiba has more hope than Luna right now.

It's difficult to believe the Terra ecology will be resurrected. The project's brains don't appear to be committed to bringing it back to life. Even though the activities that led to the project's demise could be deemed poor decisions, nothing is being done to resurrect it, at least to my knowledge.

For the time being, Luna is just another shitcoin on the block, and it may be forgotten in a few years. We can't know the future, but it doesn't appear to be favorable for the Terra ecology or the Luna coin.

But there is still hope. Someone else could take up the project and help clear up the negative image/press that has resulted from these problems. This will take a lot of time and effort, but it is doable. While we wait for them to bring the Luna coin and the Terra ecosystem back to life, we have no idea when or how they will do it.

How long will this downturn continue? The Market Keeps Bleeding

We have no way of knowing when all of this will be over. However, we can use an illness as an example. Only by eliminating the germs that are causing the infection will it go gone.

When we apply the above example to the bitcoin market, we can readily assume that the market will remain the same or even worsen as long as the forces at work continue. As a result, the Bitcoin scenario will remain powerless as long as the world economy continues to decline and wars continue to erupt.

The Irony of the Market: High Trading Volume Despite Bearishness

Cryptocurrencies have recently seen large trading volumes, and if you're a price action trader, this irony might easily trick you. Why are people trading more during this slump than they do on regular market days? Is it a symbol of hope or just a mirage?

The entire amount of assets exchanged at a given time is referred to as trading volume, and these trades are not primary buy orders. At any given point in time, trading volume represents both buy and sell orders.'

The foregoing answer, in my opinion, speaks a lot about current market observations. While it's true that the market has recently incurred significant losses, it's logical to expect lower trading volume; nonetheless, according to the concept of market psychology, it's logical to predict higher trading volume. Fear, panic, and greed are to blame for this.

In order to save money and avoid losing out to the market. As a result, people panic buy and sell crypto assets more than they are willing to hold onto them in the spirit of a bear, resulting in excessive trading volume. The market has failed to appreciate for a long time, and it has only become worse recently, leaving most people with insufficient incentives to hold on to their valuable coins.

Dealing with the Crypto Market Instability

Crypto crashes are nothing new, and they're certainly not fun. The events we are seeing this year have occurred at various intervals in the history of cryptocurrencies. One advantage is that cryptocurrency falls like a ball and bounces back over time. As a result, expect light at the end of the tunnel.

The crypto market is so unpredictable and anyone involved needs to be prepared for anything; sad but facts.

This is a well written article, I was hoping to see when the bear will end sha, I have tire.

Lol. The bear is now stronger than the bull. Very soon, the bear will serve us the bull as breakfast.

The markey really showed off its high volatility in recent times. These times are there to prived the worthy worthy and others to their position!

Yea. The volatility is usually a filtering process.