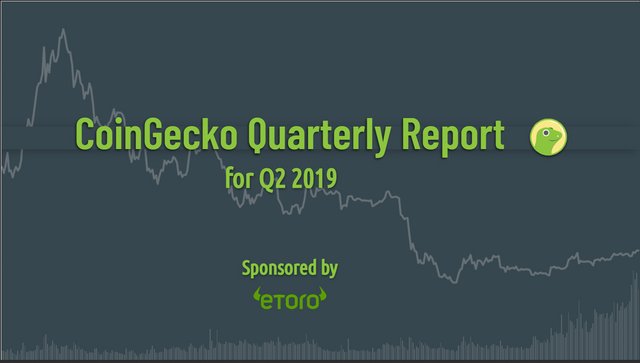 @coingecko has been developing steadily and has grown into a leading source of information both here on STEEM and the crypto world in general. While I am going to base this post on their coverage of helping us to understand Facebook's Libra initiative, there is a multitude of valuable slides and information contained in their latest report. You can find the report in its entirety here:

I'm sure by now everyone has heard of Libra and know that it is connected to Facebook. Until I read this report, I really hadn't delved too much into the specifics. CoinGecko has made the information very accessible and understandable. 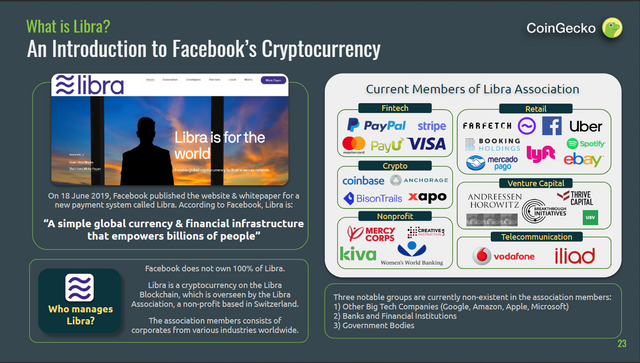 Libra is touted as being "for the world" and a "simple global currency".

The first fact that I had wrong in my mind is that I thought Facebook owned Libra and it does NOT. Libra runs on its own blockchain which is overseen by the Libra Association. The Association is a nonprofit organization based in Switzerland. It calls itself a nonprofit organization, but at the right of the slide, you see the MEMBERS of the association. All big money corporations, among them being the two major credit card companies (Visa and Mastercard), PayPal and Stripe. The major player in the crypto world is Coinbase. So, a nonprofit association ran by all the usual corporate players.

On the other hand, we also see who is NOT a member of the Association. No Google, Amazon, Microsoft, no banking institutions and no government bodies. Again, not surprising. Banking and government want to keep control of any kind of currency, not decentralize it. 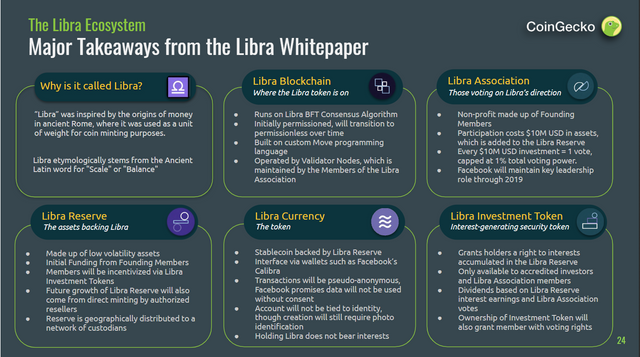 On CoinGecko's next slide we see a little bit about the mechanics of the blockchain. I was interested to know if I could buy Libra and stake it or run a node for the blockchain. In other words, can the little guy average investor get in on this opportunity? And the answer is NO. The blockchain will be maintained by Validator Nodes ran by - you got it - members of the Libra Association.

There will be a Libra Investment Token that will generate interest. Ok then, can we buy some of those? Make an investment that way? Again, the answer is NO. Libra Investment Tokens will only be available to members of the Libra Association and accredited investors. An accredited investor is generally someone who has a net worth exceeding $1 million or earns an income surpassing $250,000 ($300,000 if combined with a spouse) during the last two years.) And to become a member of the Libra Association the price of admission is $10M, which equals ONE vote.

To top off this stellar lineup Facebook will maintain the key leadership role through 2019.

So, for me, I've learned enough about Libra. I tip my hat to CoinGecko for the fantastic amount of information contained in their quarterly reports and the fact that it's presented in such a way that it's easy to understand for those of us not on the professional level.

If you enjoy writing short fiction stories (less than 1,000 words) I'd love to have you join me on Narrative. Don't abandon STEEM - add Narrative and cross post your Steem content for more exposure. Here's a link directly to my page featuring Flash Fiction:

Join me on Narrative

Get in on the ground floor and see what it's all about. If you have any questions, feel free to ask me in the comments.