Trump Threatens to ‘Leave the Country’ If He Loses

At a campaign rally in Macon, Georgia President Trump speculated on losing the presidential election to Joe Biden.
Said Trump: “You know what? Running against the worst candidate in the history of American politics puts pressure on me. Could you imagine if I lose? My whole life—what am I going to do? I’m going to say, I lost to the worst candidate in the history of politics!”
He added: “I’m not going to feel so good. Maybe I’ll have to leave the country, I don’t know.”

Okay, I’m just going to come out and say it. Might this be more than just idle ranting? If Trump loses, there’s a very good chance that he’ll be facing multiple indictments, possibly minutes after he leaves office. Even if not Federal indictments, almost certainly criminal indictments in New York. Would he not then have a very strong incentive to leave the country before that? Retire to a luxury apartment in Moscow or a nice dacha overlooking the Black Sea near Sochi?

Confirmed virus cases and deaths are on the rise in the swing states of Iowa, Michigan, Minnesota, Pennsylvania, Ohio and Wisconsin.

Store Workers to Get New Training: How to Handle Fights Over Masks

The young people struggling in the 2020 economy

What do anti-vaxxers, sovereign citizens, Second Amendment die-hards and online edgelords obsessed with “Zionist Banksters” have in common? They’re all volunteers in Ammon Bundy’s nationwide and extremely eclectic COVID-19 protest network, “People’s Rights.”
The group is basically a glorified phone tree to funnel “reopen” demonstrators to whichever nearby dog-grooming business, playground or police station is deemed to be infringing on individual liberties through public health measures.

Fukushima: Japan 'to release contaminated water into sea'. What could possibly go wrong?

Sgt. Michael Sturek was charged with felony recklessly endangering safety and misdemeanor offenses of operating a firearm while intoxicated and endangering safety by use of a dangerous weapon…Sturek was drinking with another man and consumed about 12 beers when they started looking at his guns, police say. Sturek, who said he’s a firearms instructor, removed a pistol from a safe and was “shocked” when it went off, police say.
He told an investigator he didn’t have his “booger picker on the bang switch” when the gun fired — jargon that means he didn’t have his finger on the trigger, according to the criminal complaint. The bullet pierced through the man’s groin and lodged in his thigh, which required surgery.

After 36 years, I’m fleeing what was the U.S. Department of Justice — where I proudly served 19 different attorneys general and six different presidents. For the last three-plus decades, I have respected our leadership regardless of whether we were led by a Republican or a Democrat. I always believed the department’s past leaders were dedicated to the rule of law and the guiding principle that justice is blind…
Unfortunately, over the last year, Barr’s resentment toward rule-of-law prosecutors became increasingly difficult to ignore, as did his slavish obedience to Donald Trump’s will in his selective meddling with the criminal justice system in the Paul Manafort, Michael Flynn and Roger Stone cases. In each of these cases, Barr overruled career prosecutors in order to assist the president’s associates and/or friends, who potentially harbor incriminating information. This career bureaucrat seems determined to turn our democracy into an autocracy. 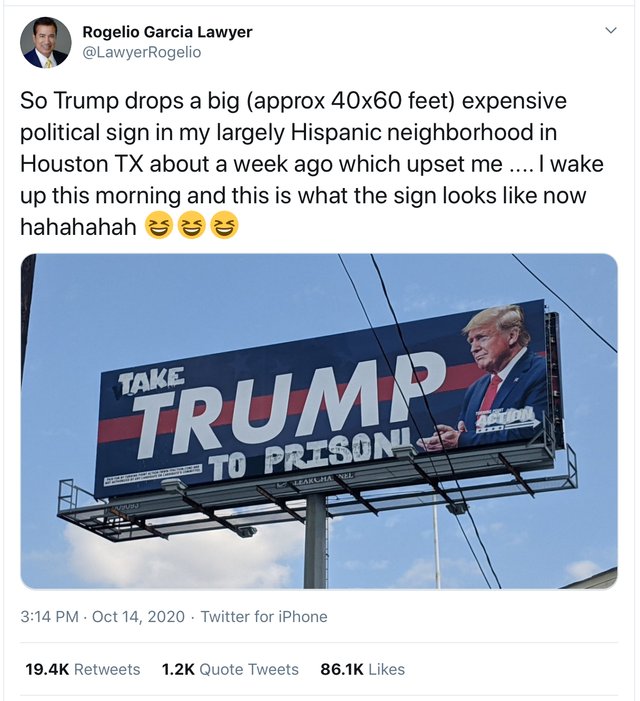 A Regulatory Rush by Federal Agencies to Secure Trump’s Legacy: With the president’s re-election in doubt, cabinet departments are scrambling to finish dozens of new rules affecting millions of Americans

In the bid to lock in new rules before Jan. 20, Mr. Trump’s team is limiting or sidestepping requirements for public comment on some of the changes and swatting aside critics who say the administration has failed to carry out sufficiently rigorous analysis.

Do they really not understand that Biden would undo all of it with the stroke of a pen?