This is higher than most individuals can earn from vesting their own STEEM.

Remember that MAPR has a unique distribution and pricing system. If you look at the MAPR tokens you, as delegator, have received today, multiply that number by the new official BUY Price and you get the same amount in STEEM as you would have done under the old system of just paying out STEEM transfers.

Token-holders receive no token distribution, unless they are also delegators. Their profit comes in the token price increase.

The added bonus is that if you don't sell this week's tokens, then next week their value will rise to at least the new BUY Price. This is how the token allows compounding of profits, for both delegators and token-holders. 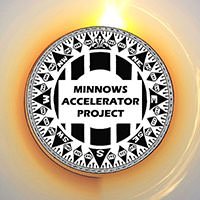 All these numbers relate to a 7-day period (Monday to Sunday) and calculated in STEEM per SP.

[1] Theoretical maximum value of Steem upvotes, assuming 10 full upvotes at 100% power for 7 days, averaged over 7 days and expressed as an APR. This calculation was performed for an SP of 1 million STEEM to be as close as possible to linearity. Your own upvote will be somewhere between 50-100% of this value.
The values are now calculated for three levels of voting power: 1 million SP (a); 10,000 SP (b); and 1,000 SP (c).
[2] Theoretical value of Steem upvote author rewards, assuming 50% curation rewards, 50-50 split of post payouts and SBD print rate, averaged over 7 days and expressed as an APR. Your own author rewards will be somewhere between 50-100% of this value.
[3] MAP Rewarder distributed payout sent to delegators this week as tokens and the MAPR price adjusted to reflect this.
[4] Total payouts for the week, including bonus upvotes, free full upvote, free SBI and this week's distribution.
[5] Our BUY price is the price you may sell your MAPR tokens such that their value in STEEM is the same as if this week's distribution was done by direct STEEM transfer.
[6] Our SELL price is about 1% above the BUY price.

Our MAPR distribution [3] is much higher than the average blockchain author rewards [2].

Our payout [3] is now significantly higher than most users can achieve [2a, b & c]

higher than most users can even generate with a full vote [1b, 1c].

Profits will be paid today in the new MAPR tokens.

There has been a further drop in Steem blockchain earning potential as the headline figure has dipped from 22.2% to 21.3% APR within the last two weeks. This may seem small, but it is equivalent to almost a 5% drop.

A reminder that during this price-stability mechanism (the so-called haircut, or tonsure) the market price of STEEM does not affect income that is generated and paid out in STEEM. As SBD has a print rate of zero, our earnings are also unaffected by its price.

Income is thus very much a function of blockchain activity - rshares activity. This is, however, complicated by things such as downvotes and the earning potential from the curation curve.

Our income of 17.7% APR continues to be significantly higher than most users can earn with their own SP. Just look at the numbers above: an SP of 10k STEEM can generate a vote worth just about a 12% yield. The new reward curve means that MAPR income is now even higher compared to the average user than it was before. Sure, it has dropped slightly in money terms due to the same reward curve changes, but compared with one's own personal SP, either delegating or buying MAPR tokens can produce very attractive income.

Although our weekly returns are variable, here is a graph of how we have been performing since the MAPR token was launched. (Thanks to @gerber for the discord-bot.) 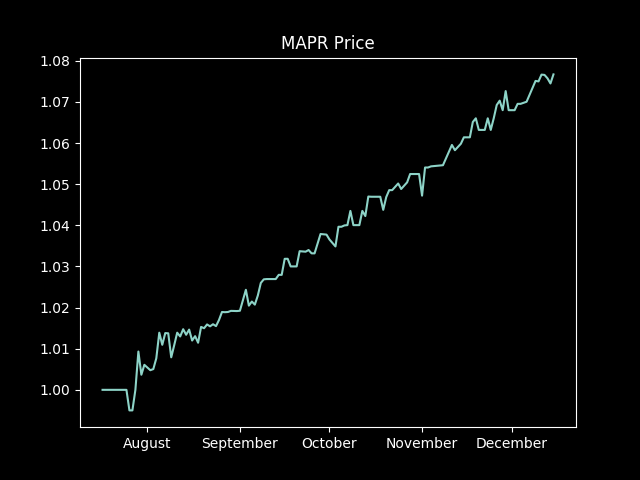 MAP Rewarder, without the token, has been in operation some 22 months, so you can extrapolate back from that graph to get an idea of our returns to members.

This graph is a record of actual transactions on the Steem Engine exchange so it can, in practise, deviate from this apparently-straight line. This can happen if there are large buyers or sellers that can use up all the tokens at a particular price-point. At the moment, we are largely seeing buy-and-hold trades and the market behaves more like a shop than an exchange. So this is just a reminder that it is a marketplace and you can leave open orders to either buy below our own current price, or sell slightly above it.

There also needs to be a psychological change in Steem users who think that SP is the only way to invest in the blockchain. Tokens such as MAPR, and others in the MAP FinTech family, are designed to achieve high and stable returns without any SP. This also means you no longer have to wait 14 weeks to undelegate SP and then power it down fully.

See you next week!

Next rewards distribution will be on Monday 23 December.