This gaming series is to keep record of the gaming I done from week to week. Week 1 post focused on Drugwars and Splinterlands. This week's post will only focus on these 2 games again. I also played @roadofrich, its currently in alpha so I won't be adding it to my gaming series until the game is in the beta version.

I play these games on the Brave browser and have it set to allow ads because each ads shown provides me with some BAT. Next month when I get the BAT payout. I will most likely convert it to bitcoin and then buy steem with it. I'm not sure what I will do with the steem just yet.

I've sold most of the DWD throughout the week in order to power up my steem account. So I only have 13.213 DWD remaining in my drugwars account. As for Splinterlands, I am saving all the DEC earned through fights. I bought 1 pack to play the game and earn DEC so I will use the DEC to buy packs. So far I have 720.594 DEC in my account. I will explain what I've done in the games throughout the week and the plans I have at the end of this post.

This week has been pretty interesting for me in drugwars as I listen to the leader of the gang I joined. He told me the amount of troops I should be aiming for, focus on improving the 2 bases I have, and keep depositing resources into the gang buildings.

Throughout the week I completely focused on doing jobs and finding players to steal resources from that didn't have armies or really small armies. On Monday, I attacked 2 players that had really small armies. It must be the slow day for the game because that landed me in the 10th spot on the leaderboards for fights. After that many people spent spies to my base Tuesday and Wednesday.

Seeing how much resources I was getting from attacking players vs doing the jobs. Throughout the week as my army got bigger. I did more and more attacks on other players. Friday was the only day that I didn't really play Drugwars as I was focused on playing Splinterlands. Today, ending the week. I went all out attacking other players to the point I was in the 5th spot on the fights leaderboard up until the last hour and half before drugwars does it daily payout and publish the leaderboards for everything.

I received so many resources from attacks at times I was training troops in both base with resources waiting to be used. I thought about starting a 3rd base but the leader of the gang said focus on 2 bases. So I had to time things right to keep my resource count low when all training slots are being used.

Next week, I will focus on attack players more often as well as building up my army. Today, I lost way to many troops trying to maintain that 5th spot on the leaderboard. I started attacking players with no resources just to stay in the 5th spot only to lose it in the end. I need to be more selective of who I attack in @drugwars. Resources must be the focus not being one of the top attackers.

This week has to be the luckiest week for me in Splinterlands. The guild leader offered to delegate cards to me so I can push for a higher rank. I told him to hold off on that thought. I was to see how high I can get on my own this week. Starting out this week Sunday, Monday, and Tuesday wasn't good days for wins. It all started to get better on Thursday, I push to 800+ and got a Wood Nymph gold foil as my reward from the daily quest. 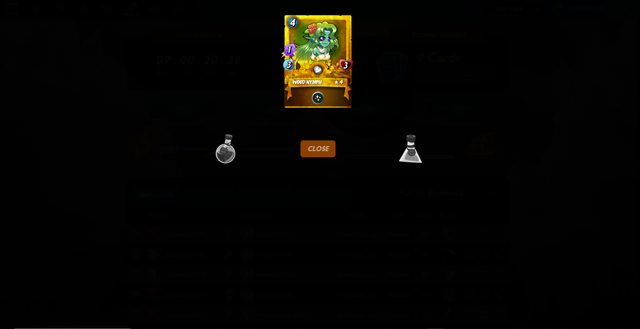 Friday comes around and I ran out of resource credits for the 7th or 8th day in a row playing Splinterlands. To my surprise @steemmonsters delegated 20 steem power to me. I guess they like to help new players get more matches in. I'm sure it helps new players from quitting the game.

After I completed the quest, I checked my resource credits and I was pretty much out. I decided to take a break. By break, I mean I decided to attack more players in drugwars as I knew the payout from last week's post for the start of this series was coming.

When that steem power hit my account. I had enough resource credits to push for a higher rank. After a few losts, I started going on 3-5 game winning streaks. It was pretty nice but finish the day on some losing some matches. Currently sitting at 888 in bronze 1. Fell short of my goal for this week to reach silver 3.

In Drugwars, the plan is simple. Attack, attack, and attack some more. My goal is to have 2 armies with the exact same number of troops in each base. If I complete that goal early in the week. I will make a 3rd base just to have a 3rd army but I won't upgrade that base. Its like a backup army.

In Splinterlands, I am not sure what I want to do to be honest. I kind of want to keep playing with my cards to see what rank I will have by the end of the season. You know, truly earn everything that I get. On the other hand, I could use the guild leader cards to reach a much higher rank and get more cards from the daily quests and end of the season rewards. This would speed up my progress in the game and card collection.

Today, I read @transcript-junky post Power Strategy Tips #34 and it gave me an idea on what to do with my DWD once I have enough steem power in my account. I can convert my DWD to DEC and save up to buy packs. That way my Drugwars gameplay funds my Splinterlands account. That way, I don't have to have that bare minimum 1 pack account feeling like a free to play player struggling to do anything.

My short term goal is to reach over 50 steem power. That way I can get in a good amount of matches per day that I can be happy with before moving onto buying packs. I found about $4 worth of bitcoin in one of my old wallets. So I sent it to Steem Engine. I will do some trading with it to get enough steem to push my account's steem power beyond my short term goal and still have some left over to keep trading.

Good luck to you all in the games you play, the investments you make, and remember to have fun doing it. I know I am. :)