You Get What You Pay For With Government

The world over governments have come into question over their handling of the lockdowns, economic recovery and management of the money supply and while most people don't understand how the economy works, the majority focus on what the government can do for them. You pay your taxes like a good solider and outsource some of your purchasing power via inflation to allow the government to run the country the way they see fit.

When governments exercise their programs from tax cuts, trade tariffs, regulations on business, lending standards, and the social projects they choose to fund the focus is always on one side of the output.

There's always a positive spin doctor bragging about how the government was able to do something, but we never talk about what your tax and inflation stealing purchasing power does that isn't great. 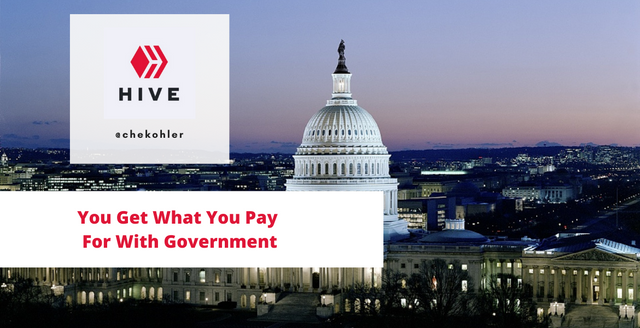 No one talks about the unintended costs and consequences.

No one talks about the kickbacks and law changes to give companies an unfair advantage over others.

You get what you pay for

You need to accept the police brutality, the monopolistic companies, the student loan crisis and the inflation tax; you need to accept the hollowing out of the economy and bailouts because this is the representation YOU asked for and YOU paid for so you have to take responsibility for the good AND THE BAD they do with the money.

As someone who disagrees, I'm willing to fund alternative currencies and would much rather have Bitcoiners steal my purchasing power if they ever forked to change the hard cap or unlock wallets that are dead/lost before I let governments do it.