With CTPSB initial investors multiplied their money almost by 10 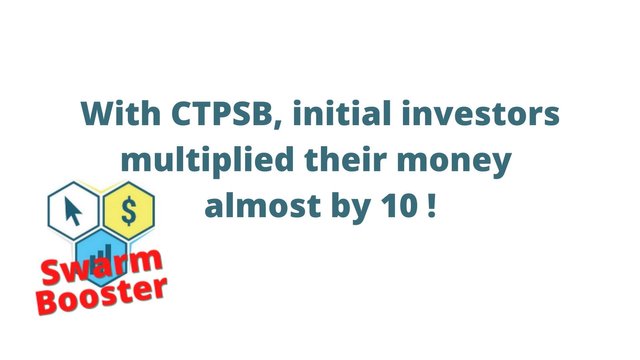 In the defi world, when projects starts out they tend to attract people with amazing APR. The problem is often that it's a calculated APR based on current prices. In most of the cases, the more money flows into these DEFI projects and the more time elapses, the less return these vehicles bring.

With the CTPSB project, we started a financial project a year ago and we can speak about real returns. The great thing about this project is that the money that is collected in it not only serves to get a return, it is actually used to curate content of the CTP community, helping all it's members to grow on this blockchain.

The project started in september 2020 with a kind of initial token offering. People could simply send Hive and at the end of the month, they would get 1 CTPSB token for each Hive they contributed. All the hive generated like that was then powered up and the hive power on the account was actually belonging to the owners of the CTPSB token. In financial terms the @ctpsb account is a tokenized account, owned by the CTPSB token holders. Through curation and post creation, the account managed to generate an income and the hive power of the account grew over time. This means that the token value also increased accordingly. Thanks to the leverage effect of delegations, the value of the token increased much faster than a normal hive account would do. In one year the token value passed from 1.017 Hive to 1.782 Hive today. This is an increase of 75%!

Price evolution of the CTPSB token in Hive

Compounding with the increase of the value of hive

Price evolution of Hive in USD

Since the financing of the delegation interests is done through curation rewards in hive-engine tokens, the high hive prices have the effect that it gets more difficult to reward delegators with a high APR if expressed in Hive. We have restructured some of the functioning of the project in order to improve this return. We could manage to increase two weeks in a row the number of CTP tokens distributed per hive power delegated. It's still now where we want it to be, but we are getting there.

Lately curation rewards return also have decreased slightly, probably because more hive is staked than before and therefore the inflation is distributed to more stake holders.

For the coming year, we expect that the return of the token in hive will go slightly down because of the factors I just expressed. However the token will still give a better return than if you would invest in hive and curate yourself. Thanks to the delegations and also the post rewards, the return of the CTPSB token will still be better. At the same time, when buying CTPSB tokens you support the CTP family, a community of builders that are working on developing hive and it's ecosystem!