Feedback from the February 1st Hive Power Up Day 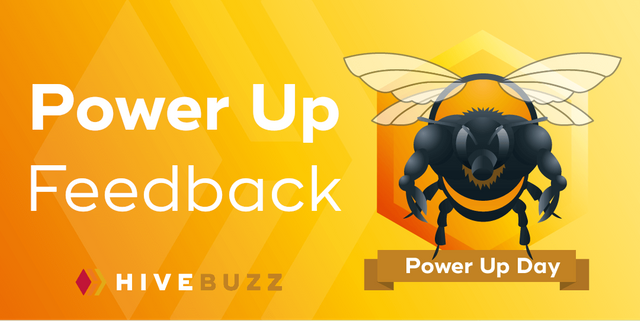 Once again, we were surprised by the enthusiasm and the participation rate in this second edition of the year 2022 of the Hive Power Up Day.

We broke the record of participation with an ATH 484 users participating in the challenge. Is it the Chinese New Year effect?

Power Up Day has become an important moment in the life of our community and it is now setting the pace each month.

A few words from the PUD organizers

Happy shortest month of the year, everyone! Hard to believe we're already in the second month of 2022 - guess time flies when you're busy watching the price of Hive slowly ticking back up!

Judging from what I've been seeing in my feed (both here and on Twitter), I'd say we're going to have some awesome numbers for February's Power Up Day. I know at least a couple of long-time Hivers have made some sizeable power-ups, and there have been lots of posts saying, "My first ever power up" (and not just from newbies). It's so encouraging to see all the enthusiasm for hodling during this dip - it's one of the reasons why I tell everyone that Hive is a coin like no other, because our passionate and dedicated community totally rocks!

Speaking of passionate and dedicated, a big THANK YOU to everyone who participated in this Power Up Day by powering up, posting, and/or shouting out on all traditional web 2.0 social media. All of those things help shine a light on our blockchain home, which in turn helps to grow our community. Special thanks to @hivebuzz for always BEEing such an incredible buzz-maker for Hive Power Up Day, and for continuing to add to the fun (looking at you, Hive Power Up Month!). And here's to all the Hiveans who continue to increase their voting power and influence on the blockchain - congratulations to you all!

What are the PUD stats of this month?

As usual, let's start first with those who choose to help others grow, the Power Up Helpers, as those are the ones who deserve the most attention.

We have 14 users who have made a power-up to another account and have thus allowed 15 people to get their PUD badge.

[REMOVE] Special kudos to those who helped several accounts: @ahmadmanga
(3).

A huge thank you to them all for their generosity! Show them some love by upvoting one of their recent posts.

In previous years, we had 166 users who helped at least one less powerful user who never got any power-up from anyone. 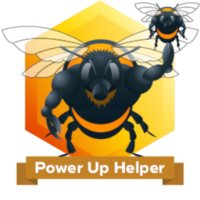 This brings the number of helpers for this year to 22 users.

Remember that the number of people you are helping will significantly influence the delegation we will do to you.

Let's now take a look at how you did against the previous editions: 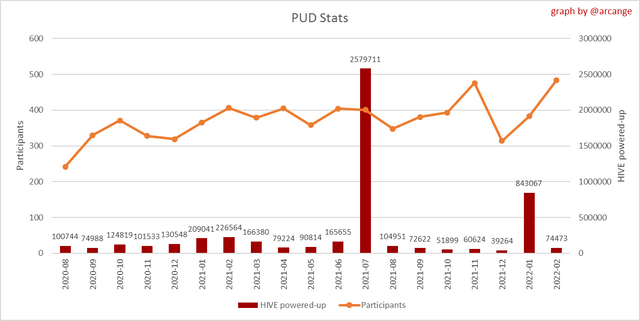 As mentioned at the beginning of this article, we had a record number of 484 participants. This is a new all-time high and demonstrates the community's interest in this fun yet self-growing challenge.

Regarding the volume of HIVE that have been powered up, we have a decent amount of 74473 HIVE powered-up.

Let's now look at what happened with the distribution of power-ups: 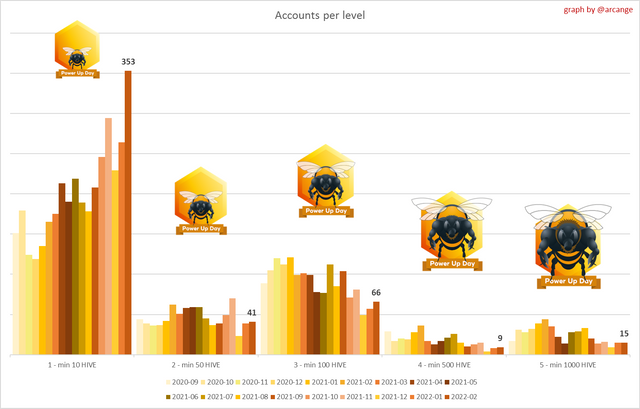 They powered up at least 1000 HIVE and got the Jumbo-Bee badge.

Power Up Month is underway!

Don't forget that the Power Up Month challenge now takes place every month.

If you participated in the Power Up Day, you are automatically "registered" for the PUM and can be rewarded with a delegation of Hive Power at the end of it if you succeed in the challenge.

See you on March 1st for the next PUD!

Regarding the volume of HIVE that have been powered up, we have a decent amount of 74473 HIVE powered-up.

It is good to participate in this. I am currently a minnow with 1233.824 Hive Power, and I am on my way to become a dolphin (that is somewhere around 5000 Hive Power).

Good luck to everyone.

Have a nice day. All the best. Greetings and much love from Hungary.

Due to the ratio of HIVE (and Hive Power) to VESTS (which determines the level of the Hive account) slowly decreasing (at a rate of roughly 10% a year due to inflation), the amount of Hive Power needed to reach the next account level is also increasing (very slowly for each 3-second block on the Hive blockchain).

A Hive account is currently required to have more than 5,500 Hive Power for it reach the Dolphin level. I hope this is not too complicated for you, since this contains complex Math.

I give you some !ALIVE and some !LUV.

Thank you for this action! The more Hive is powered up, the better. 75k is not a small sum, that is for sure.

So glad to have BEEn apart of this months PUD! Well done everyone!

Cool!!!
Thanks for the mention!

Thank you for participating in the PUD @silversaver888. 💪🐝

Massive congratulations to everyone that was involved, it is always awesome to see ATH and records being broken!

Happy to have been part of Power Up Day once again! Thanks for the write up and big hi and congrats to everyone that's taken part!

Thank you for the support and good information from hivebuzz best of luck, The more Hives are turned on, the better. 75k is not a small amount, that's for sure keep spirit hivebuzz and always success