Steem + Tron Thoughts: The Best We Could Have Hoped For 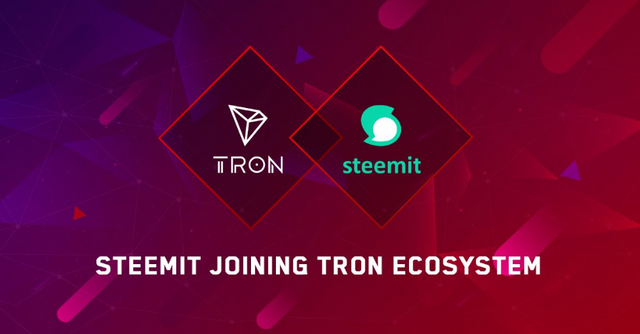 So my initially reaction to this news was to freak out a bit so I didn't make a post about it because if it ended up being nothing I didn't want to look like an idiot one day later. I listened to the AMA and am currently listening to PAL discussion of the AMA.

At this point I've calmed down a bit and I'm falling a bit more on the positive side of this. There were a lot of concerns based on the initial announcement and all of the major concerns that I had were addressed in this AMA to some extent or another. Here's a bulleted list to keep this simple.

Okay, for me that covered all the scary stuff, but let's be clear. These are all just words said in a quick livestream. I think it would be safe to assume any of this could change if it turned out that he thought that's what would be in his best interest.

The reason I'm bullish about all this is considering he just bought the majority stakeholder position in Steem, Steem's success is his success. It would be pretty stupid to invest millions into something just to stomp it into the ground. I'm not happy about these points because I'm naively trusting someone I don't know, it's because I can clearly see the logic of him wanting to nurture and add value to his investment.

What difference would it make if the value comes in via Tron or Steem, he's the majority stakeholder in both now. If it turns out that it's the case that the most valuable thing that could be done for Steem is to accelerate, support, and market the Dapps that are here, which is what I believe to be the case, I think that's exactly what he'll do.

And that my friends, is exciting.

Justin Sun has resources like nothing we've ever experienced on Steem. As @themarkymark pointed out a few times now, the percentage increase that TRON experienced because of the rumors leading up to this were larger than our entire market cap. If we just for a second don't assume the worst case scenario, and look at this from a more positive perspective, we potentially are about to get everything we've ever wanted.

A competent entrepreneur at the helm, someone that can get out there and be the face of Steem and sell it to the world, a ton of resources to support development of our already awesome applications, validity in the eyes of investors since someone with so much capital is as excited about us as he is, etc.

There is always the potential for a nightmare scenario and I'm on board with others in saying that we should take precautions to prepare for that and be ready for it, but let's be clear about something. This black swan has been here this entire time. There is no NEW risk that just presented itself. It's the same risk but with a new face. It was always a risk of WHAT IF Steemit Inc became a bad actor, we'd pretty much be screwed. We all got generally complacent about that risk, but it's always been there.

So in terms of Tron integration, future token swaps, a Steem token on Tron, etc. Here's a bit of speculation. I think that might have been an initial idea, but upon looking at a hugely negative reaction it was walked back. I don't think it was in stone, just an idea that sounded good at the time maybe. I don't think it's all that nightmarish to think about a Steemit on Tron that works as it's own content site that distributes a Tron token, or having a tron token that functions on our current interfaces like a SCOT token or SMT potentially would. I think this sort of integration was where I saw things going in the future anyway.

I think a low hanging fruit in this discussion might be allowing for Tron tips on Steem interfaces, like you connect your Tronlink wallet and can tip in Tron. That would be pretty awesome and a good way to quickly get Tron users to also be Steem users.

Another thing slightly related. I've heard a lot of Steemians talking as if Tron has no users. I've had a few brief affairs with Tron. It has a lot of users. I was on telegram in the stuff I was in, but yea, don't let the fact that you don't know about them make you arrogantly think they don't exist. Tron isn't where it is for no reason.

In conclusion, in the end I think we should lean all the way into this and embrace this as a blessing until it proves not to be. Keep posting, keep building, keep planning, keep growing, and take whatever help we get and use it. Maximize all opportunities. Hope for the best and prepare for the worst.

I also think Justin is a competent and capable leader. I have no fears he will bulldoze the place.

He is smart and not a clueless moron. He knows Steem isn't Steemit, he knows what blockchains are and DLT, etc. It's not some 20 year old blogger doing an AMA about backpacking in Asia.

My concern is he could slowly turn Steem into Tron land. He made several strong hints at it. We may actually like this, especially if it is done carefully and transparently.
I think Steem is a better blockchain than Tron for tech, community, decentralization, dapps and use cases.

However as you said Justin's Tron is better for resources, leadership and visibility.

Bottom line, Steemit needed the change Steem doesn't neccesarily need it. Justin knows this and will want to cooperate. We should.

I think now is a time to PROVE that the best thing is to let Steem be Steem. I think he'll make decisions based on results so if we go live with Communities and SMT's and he puts his money to work marketing and promoting, there's no way we don't win.

Right. If Tron treats Steem well, the community will recognize this and help with whatever goals he may have for Tron later.

I couldn't agree more - the risk has always been here, jsut now it's a slightly different form. I think that new form is a welcome change as the old one was jsut stagnating and not really moving. You sometimes have to make a mess to make things better. I'm leaning in - business as usual, adapt and grow, keep the community strong. I'm feeling hopeful tbh. He's not going to crash and burn something he's invested in.

Ive been saying from the beginning that justin would never come in and demo the most valuable part of the aquisition. Everyone seems overly pessimistic about everything happening. this could be due to the long cold bear market that we've been through lmao. Eveyone needs to be a little more optimistic!!

It's that first communication, I think that caught everyone by surprise and freaked everyone out. After the AMA I'm feeling a bit better.

listening the live stream again there are that "not right now, and at the moment" problems as we love our steem blockchain and we want to be steem blockchain, we will not be assimilated :)
and he mentioned that he invested because of the users and that he will listen to them, so if that is true this could be a really good thing.

For now, I say we keep grinding and building.

I think you are assuming too much to be that excited.
We still don´t know what he wants, and in case it is not the best, he would not tell us. To believe that he would tell people his plans and stir up some selling, is naive. The AMA looked just like calming down the initial concerns without telling real facts. So might not have "walked back" on the token swap, but just pretended to do so.

"...the most valuable thing that could be done for Steem is to accelerate, support,..."

Yes, this is logic for us, but again we can´t be sure it is what Sun wants. So pure speculation so far.

However, fully agree on your 3 sentences!

I am very positive too @midlet:) Yesterday was like a rollercoaster of emotions and today i woke like having a hangover,lol.

I honestly hate how iffy this all is & still just how unclear the deal is, but that only leads us to make our own conclusions.

As for me personally, after running it through my head quite a few times, I think Steem is still a safe bet to invest in ( speaking both time & money ). If Justin is going to do anything, at the very least we have time. That's if he does anything.

In the meantime, we HODL, we BUIDL, we... What's the meme word for play? PAYL?
Just continue to do our thing & believe that someone wouldn't plunk down a load of cash just to tank the platform. If it is truly left up to my own opinion of what will happen, well, I guess I'm choosing to believe in the good :^)

Thanks for the update Midlet. It's nice to see a bigger fish have some interest in the preservation / support of Steemit.

I would have thought ETH would have wanted to pick up on the project, but it looks like TRON beat them to it.

If we flip this and Justin Sun had sold us over to Ned and his merry team with no money and resources and no marketing skills how would we feel?

Visualizing that answers most of our questions ;-)

Even steemit stopping the dumping of steem each month is a massive win.

That’s actually a really good point I don’t think I’ve heard made yet. For the foreseeable future, we don’t have to worry about Steemit selling STEEM to survive. That IS a huge win.

Yep. I am super bullish on steem at the moment.

I have worked in a lot of startups which are starved for capital; and they end up stuck even if they have the best tech. Its not the best tech that wins its the tech with the most funds and best marketing reach.

Consolidating is uniting! What is the point of being a moarning little biatch when nothing even happened yet...

All this will do is basically just take Steem as a whole - up to the moon...

We are dealing with the professionals and Ned obviously knows better: nobody is going to spoil what once took enourmous effort to achieve.

We have not merged with a centralized entity. Whatcl's all the fuss?...