I never use the safety

This may seem like an irresponsible thing to say, I never use the safety, however irresponsible is the last thing I could ever be called, certainly by people who actually know me. So how than can a shooter like me not use the safety and why do I consider it legit? I'm I glad I asked this question on your behalf, read on for the answer you never knew you wanted. Lol. 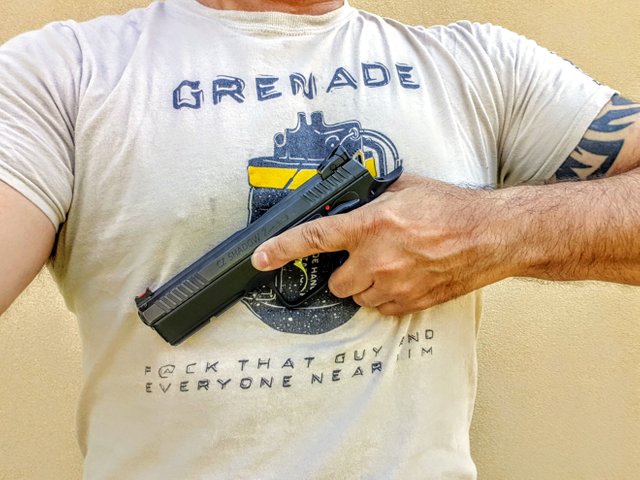 Me and my exemplary trigger discipline, even left handed when right is my natural hand. You can see the safety is off. This simple discipline is so often disregarded, especially in the movies, bit is critical.

Before I get going I want to say that this post does not refer to a military situation of any kind. It relates to what I do now, competition shooting, hunting and culling. The military have different requirements and I'd rather not go into it right now as different militaries have different processes.

So this post will relate to my culling duties, something I usually do alone, and to competition shooting at various ranges around the country, and my home range which is a military range. It is not at all relative to military shooting. Savvy? 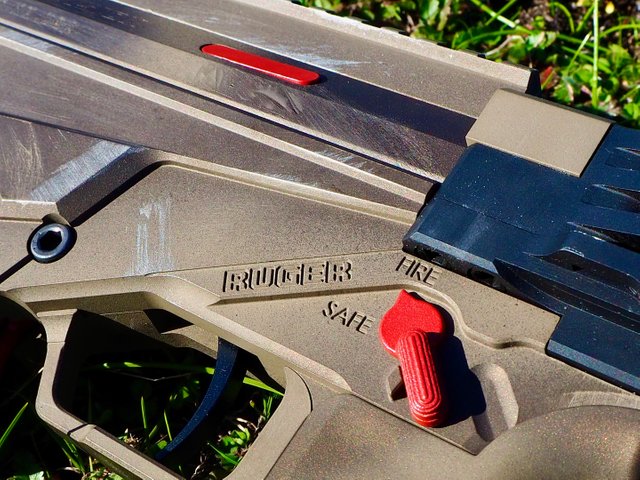 I do this mainly alone but sometimes with one other person; Either way I always keep my rifle in the same condition.

Basically whether mobile, stalking, moving around, or when in a sniper's hide my rifle is in the magazine loaded, bolt closed condition, with no safety on. Now before you tell me how unsafe this is, let me finish. Note I said magazine loaded and not rifle loaded?

So what I do is load the magazine with ten rounds but before I insert it into the rifle I open the bolt, check the rifle is empty, close the bolt and pull the trigger to release the firing mechanism. Only then do I insert the loaded magazine.

This leaves me with a rifle with a closed bolt and a full magazine with no rounds in the chamber.

It doesn't matter what I do, the rifle will simply not fire. I could drop it, kick it, throw it in the air, run it over with my truck...Talk to it nicely...It will not fire as there is no round in the chamber.

When a target presents itself all I need to do is work the bolt up, back, forward and down, and it picks up a round, cocks the firing pin, sets the trigger and pushes the round into the chamber. Only then is it loaded. A pull on the trigger will result in a loud bang and a bullet exiting the muzzle at about 2850 feet per second.

This takes under a second of course, and I'm ready to fire. If I need to do it quietly then it takes longer, but not by much. 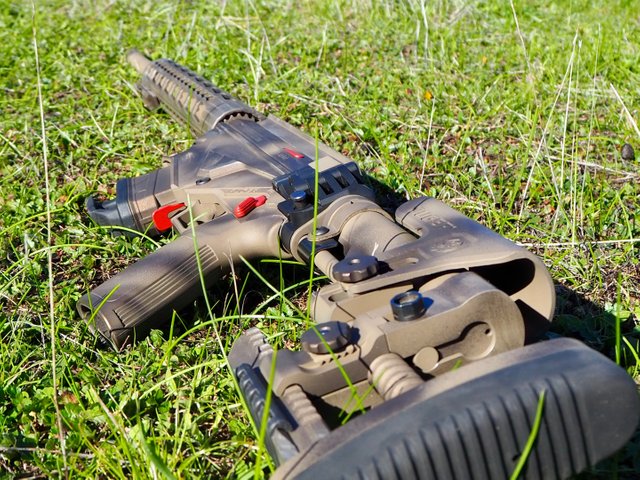 Why not use the safety

This is another intelligent question you ask, or I ask on your behalf, I should say.

Because I don't trust the safety is the answer.

My trigger discipline is at expert-ninja-rockstar level meaning I never get my finger near the trigger...But if I tripped and fell? Who knows. With the rifle loaded, cocked and basically in a fire-ready condition...Fall over, bump the rifle safety off and accidentally hit the trigger...Maybe someone get's shot.

I think my way is much safer. It allows me to shoot those ten rounds, reload a second magazine, shoot another ten then the third and so on. When complete I drop the magazine, reload it, check the gun is clear (empty), close the bolt, pull the trigger then insert the mag, just like before. Simple really. Safe too.

Just a note on the long range practical rifle competitions I do. At no time is a rifle to be loaded unless under the command of a range officer. Not even the magazine goes in. In fact only the current shooter, and the next shooter, are even permitted to handle their rifles. On command the shooter loads the magazine and again, no safety is used as they are not relied upon by the shooters or range officers.

I have seen shooters use their safety's anyway though, which is permitted, but then forget to flick it off when the stage begins...Every split second counts in these competitions as they are fiercely contested and losing a couple seconds by doing something like this will often destroy that competition stage.

Here in Australia it is against the law to hunt with a handgun and we are unable to carry unless a person has a particular permit which is job-related: Armed guards mainly. Of course government have them; State and federal police etc. but interestingly they are often not shooters in their civilian lives and are unlicensed. They often can't shoot for shit either as their annual qualification process is a total joke. Anyway...Handguns are for ranges. Yes, we can take them home, but no, we can't go walking around with them publicly. Now that's out the way...

At the range we walk around with our firearm holstered and usually with 5-6 full magazines on our belt, so 60 rounds. There could be up to a couple hundred people at a big competition event, but typically under 60 or so, all armed and wandering about.

At no time is anyone permitted to draw their firearm without being expressly commanded to do so by a range officer though. It only happens when at the start position of the shooting stage. 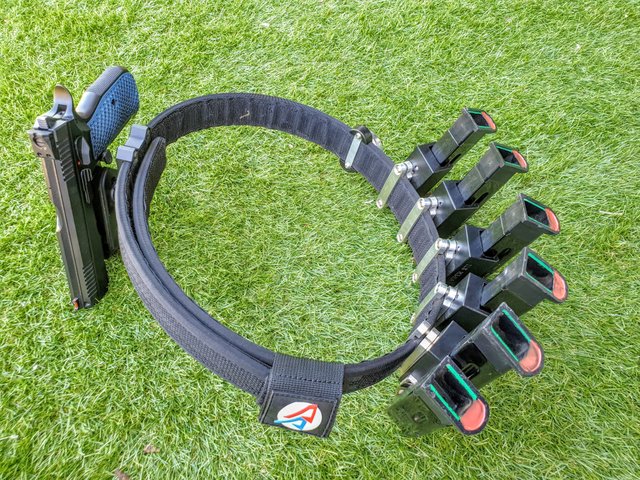 This image shows my holster rig with magazines and handgun inserted. I'm right handed so the gun would be on my right, obviously. The holster is specifically designed for a quick-draw and locks the gun in place with a lever when required.

The command is you may load and make ready. The only exception to this rule is in a designated safe area and no ammunition is permitted there. At the safe area one can unpack and handle the firearm, clean it, practice-draw and pack it away.

Ok, so a few words on the various conditions of a handgun. This is a military concept, devised by a Marine in fact, and is applicable to semi-automatic handguns and some other types of firearms also.

That's a military thing and most militaries around the world have some variation of it. It does not apply to us at the range.

If a person has their firearm in any situation other than totally empty and holstered, unless about to start a stage under the control of a range officer, then they would be jumped on very quickly. 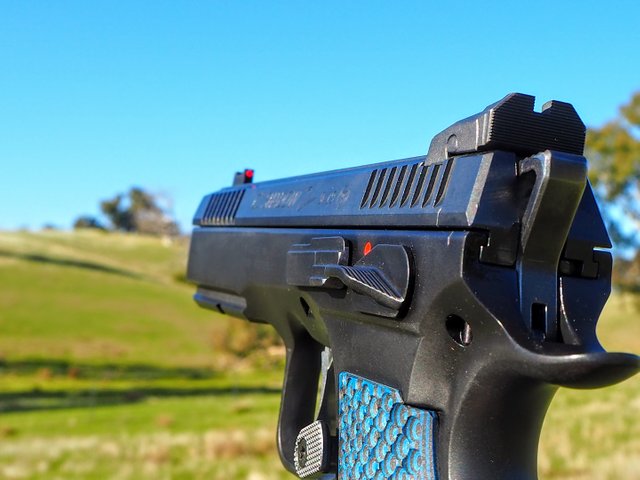 This image shows the safety on my CZ Shadow 2 9mm semi-automatic...The safety which I never use. Find out why below.

This is the process I would go through to begin a stage, run the course of fire and complete it:

Now at this stage the gun is ready to fire. However I have to holster it to start the stage. This is when some shooters use the safety, those shooting in the OPEN division, which means any modifications are permitted and their first shot can be single action.

I shoot Production division as I prefer all of my shooting to have a practical nature rather than being competition-specific. I need to know all my guns will run in the field and I don't like fancy-pants race guns. (Maybe a different post here I guess.)

So I don't use the safety and then holster. I have to do it differently. I simply can't put a loaded, ready to fire handgun into my holster.

Part of shooting in Production is that the first shot has to be a double action shot. This means that the when the trigger is pulled the hammer has to travel back, then down. Single action is when the hammer is already back and only needs to travel forward to strike the firing pin and fire the round.

So this means I have to manually drop the hammer. Back to the shooting process...

At this stage I'd be running all over the place, opening doors, climbing barricades, shooting through windows etc. doing whatever the stage required. The range officer runs along behind.

So you can see, at no time does the above process use the safety, but it's incredibly safe. 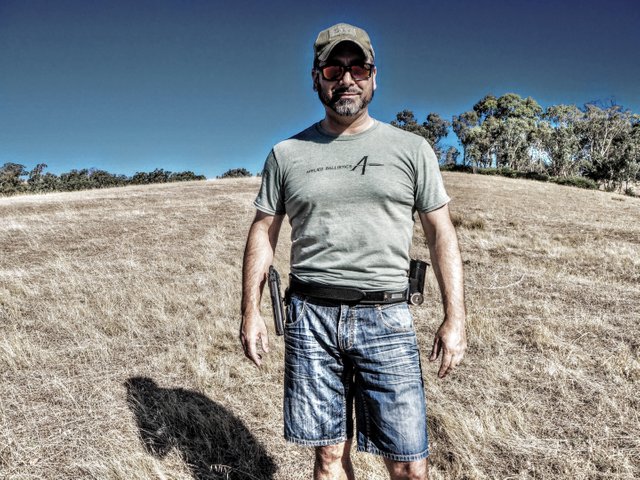 My holster rig when on. The six magazines are arrayed to my left, positioned for quick access and speedy magazine changes.

Gun ranges are usually run in a very strict manner in accordance with State law. There's no messing around from a safety perspective and each person is stringently controlled. If new shooters turn up they are instructed until deemed safe then signed off. To shoot from a holster a person also needs to qualify. It makes us all feel safe. Of course, if someone wanted to pull a gun and start shooting people some would die, but I've not heard of that happening here.

I've only once seen a person pull their handgun when not under control of a range officer and she got jumped on quickly. She ended up bursting into tears and was consoled by her her husband...But her membership was revoked and she is not permitted on the range anymore. Harsh considering her error was innocent, but what if she was loaded and had shot someone in the back of the head. Nope, there's no exceptions.

So there you have it...A short 2000-word piece on why I never use the safety on any of my firearms.

Firearm safety is never a joke and one cannot ever be too careful. People get killed by accident and the internet is full of people who have shot themselves by accident or carelessness. It happens...But it doesn't have to happen. Training should be undertaken and common sense applied. Shooting is a safe sport if approached correctly, much like driving a car is safe when done correctly. Mistreat either and someone will be hurt or killed.