The Lost battle with the Soul Strangler: My Regrets - What I should have done better: Splinterlands Battle 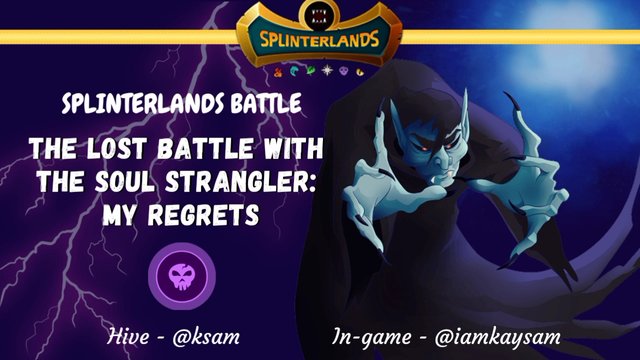 My Splinterlands in-game username is @iamkaysam 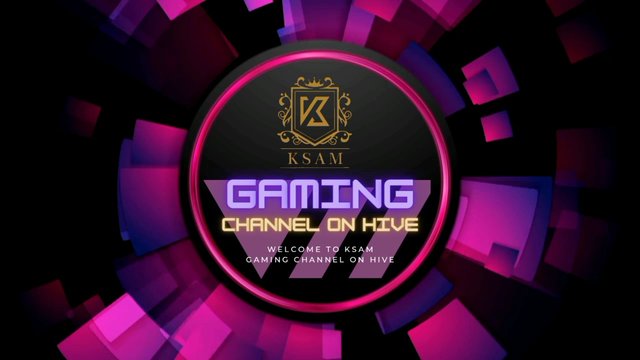 Hello my viewers and all Hivians, Welcome to my Gaming Space where I give detailed analysis of my Splinterlands Battle.

For this week we shall discuss the theme of SOUL STRANGLER. 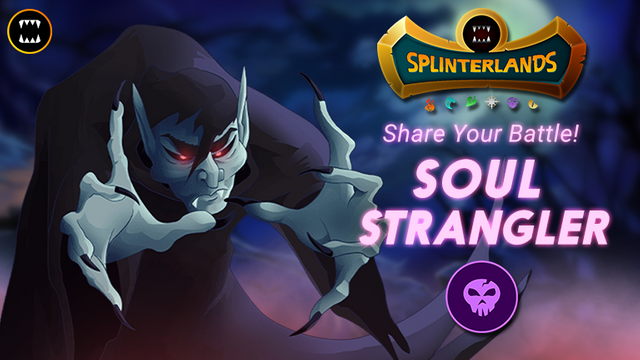 Prior to this moment, I haven't used the Soul Strangler for a battle on Splinterlands before. This is because of my subtle dislike for "most" Ranged Monsters. Yes, I said "Most" because I feel most are somewhat useless when compared with the Magic or Melee attack Monsters.

For instance if all have the same STATS and Ability, one thing that makes the Ranged Monsters go below is because of their inability to attack at the first position, except the rule set says others.

Let's get into an in-depth analysis of this Monster and I will share a battle were I used it.

And by the way, I lost in the battle. This is my first time of sharing a battle I lost. But the fact is that many of us lose lots of battles, but we only share the ones we won 😅

Well, while sharing my loss, I'd also share the reasons for the loss and what I would have done differently to win that battle. 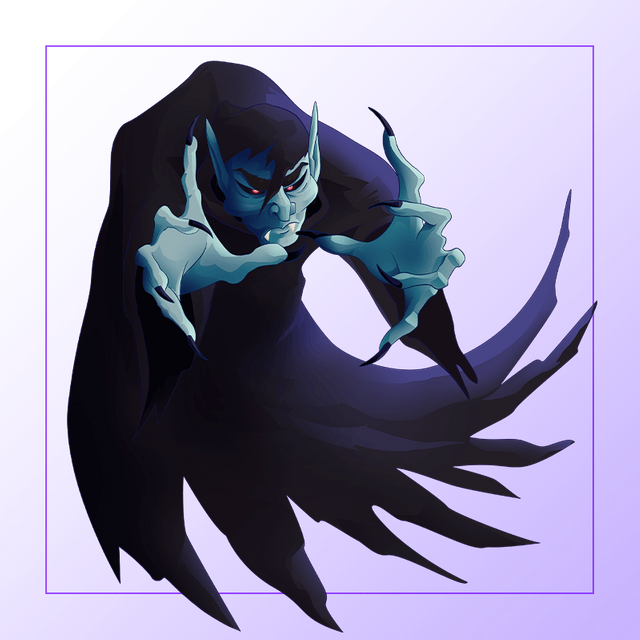 Before the chaos gate opened, the towered city of Darkholde was peaceful and quiet. Situated in the cold, Blackworth mountain range, it was presided over by a long-standing noble family and governed by Baron Kutziq Neculai. If the citizens knew the truth about their governor, then maybe they wouldn’t have been so loyal, but the Baron’s tastes were sated with great restraint and he truly did care for them, taking only what he must and never more than he had to. For Kutziq was a vampire, a race as ancient as the stones they’d used to build the city. A man who loved his people in many ways, including their unique flavour.

The soul strangler is a creature of nobility, of good stock and incredible wealth. They live in lavish opulence, wearing the finest attire and moving in the most sophisticated of circles, often engaging with the high born from other cities and enjoying intimate gatherings that last for days.

However, when this vampire chooses to hunt, they take on whole new guise, almost shifting their form to become more accomplished for the chase. Pointed ears extend refining their hearing and their eyes change colour affording the ability to see in the dark – their preferred time to hunt. Long fangs grow from their mouth and vicious talons sprout from their fingers. But what you can’t see in either form is the power they hold within their mind, an ability to attack at a spiritual level when they eventually find their adversary, squeezing the very life from them; a ranged attack that if not avoided, will have devastating consequences. 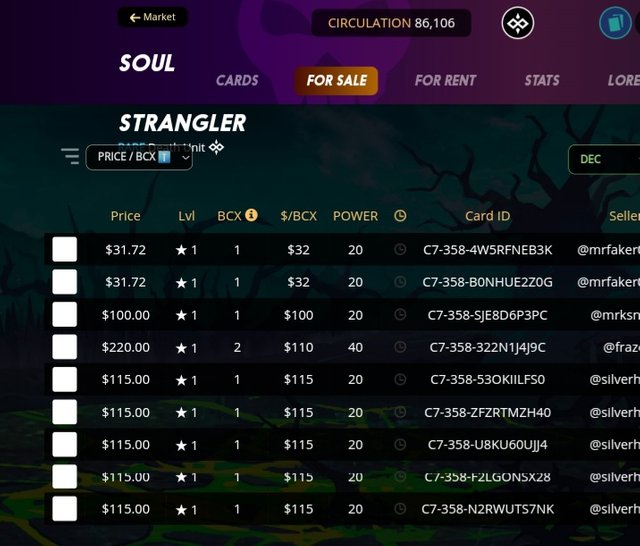 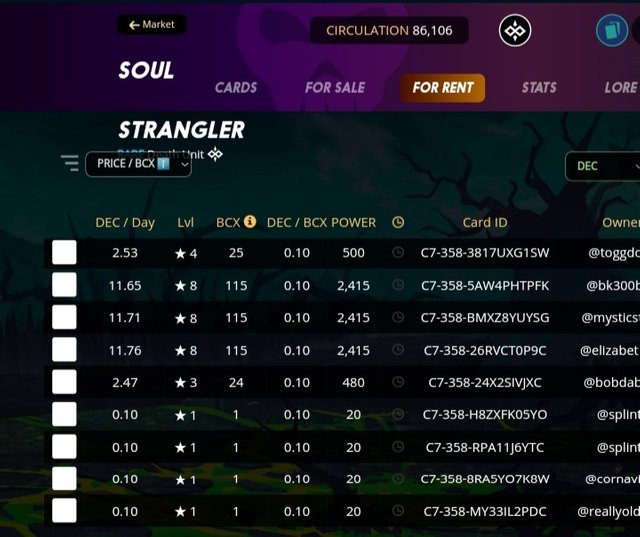 The SOUL STRANGLER is a Rare and affordable Monster.

It has about 86,106 cards in circulation right now.

You can rent the card for as low as 0.10 DEC (Dark Energy Crystals) for a level 1 Monster to 11.76 DEC for a level 8 Monster per day from the In-game Marketplace.

You can also buy the Soul Strangler Monster from the in-game Marketplace. It is auctioned at the Market place for as low as $0.12 and as high as $220.

The Soul Strangler is a relatively cheap Monster. It doesn't offer much, hence it is worth its price.

Honestly, I don't find this as much progress or development, in addition to the fact that it doesn't possess any Ability.

Maybe I'll rank it a step higher than the "useless" cards because of its level of Rarity (Rare).

This is my thoughts though. You are free to opine differently 😊

📝 RULES OF THE BATTLE

The rules of the game were:

MY STRATEGY 🎯 AND LINE-UP ♟ 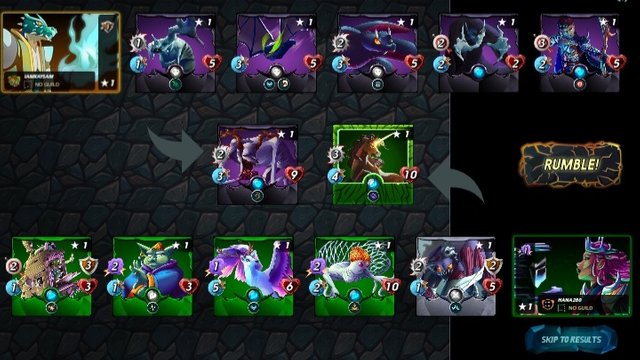 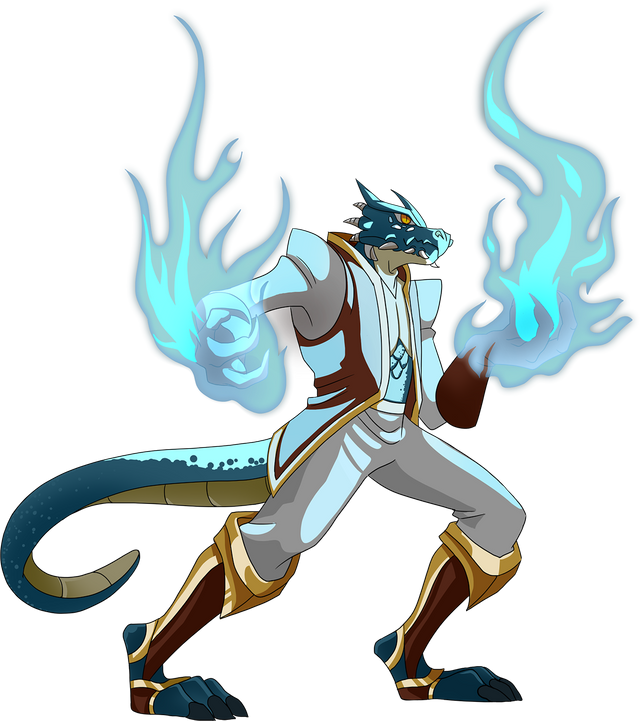 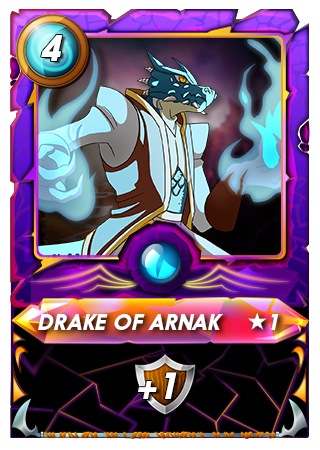 The Drake of Arnak is a Summoner from the Dragon Kingdom. However, this Summoner is powerful enough to summon Monsters from any Primal Force it wishes.

In this Battle, I used it to summon the Monsters from the Primal Force of Death.

My reason for doing so is to arm my Monsters with shield for the battle. 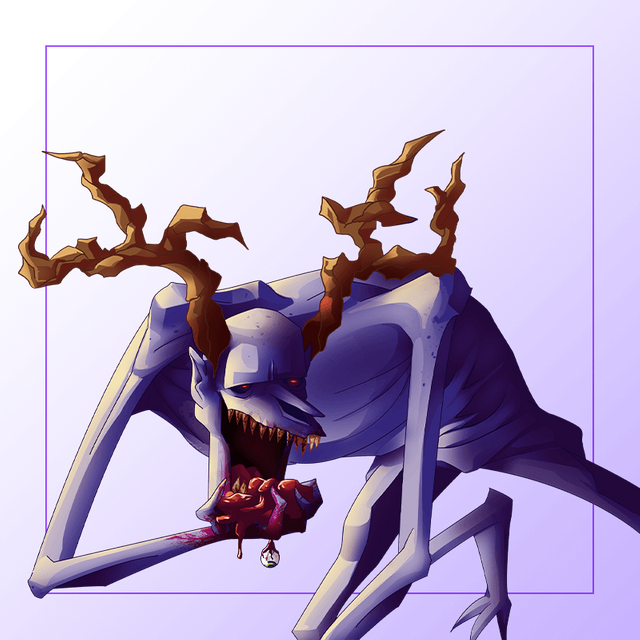 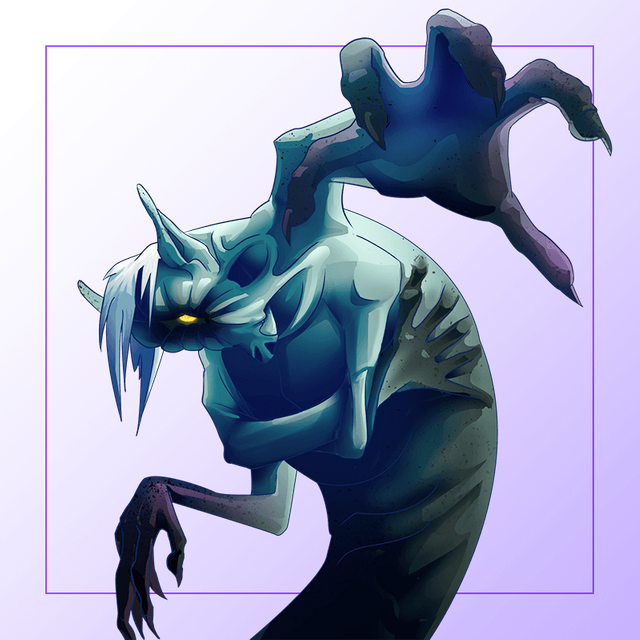 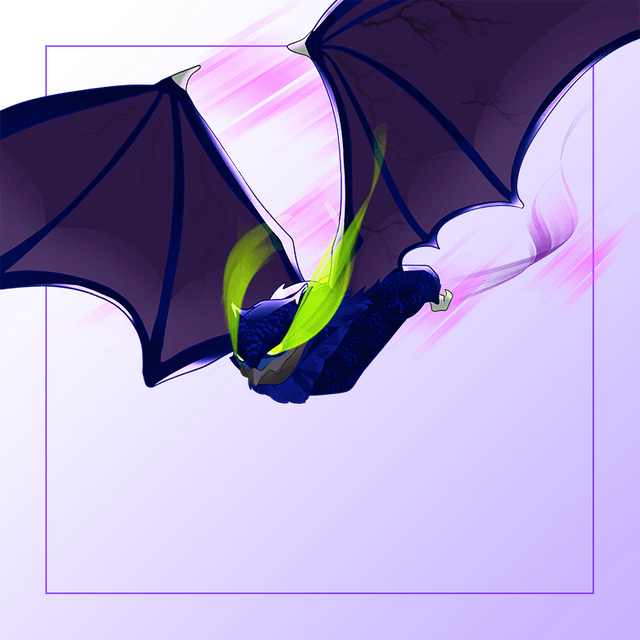 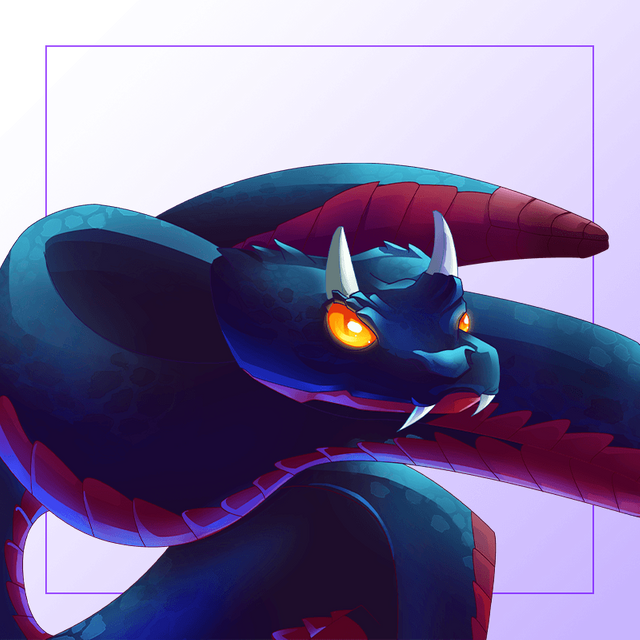 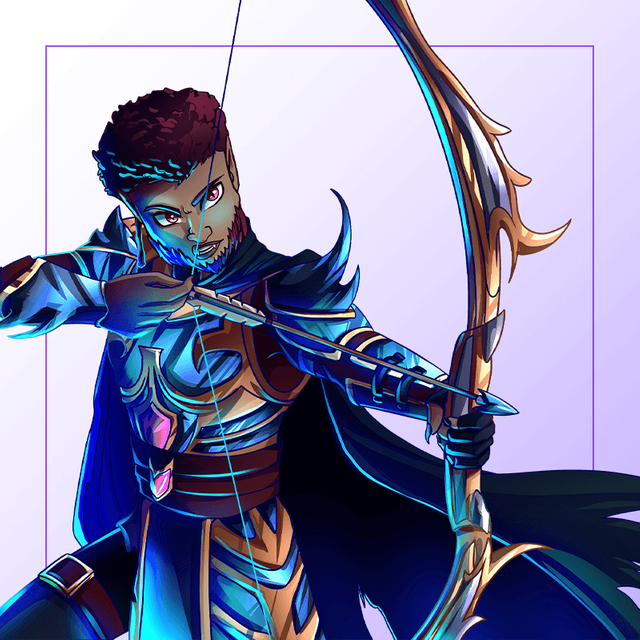 THE BATTLE ⚔ and 🎤 COMMENTARY

☆ My opponent chose a formidable team.

☆ When i saw the line up, I knew it was a lost battle for me.

☆ His First Monster, the Unicorn Mustang, is a Great warrior and with the support from a healer, Goblin Psychic, mhen that combo is dope.

☆ If I were to use an earth team for a battle with 99 Mana Cap, my choice Monsters will not be far-fetched from what my opponent chose. 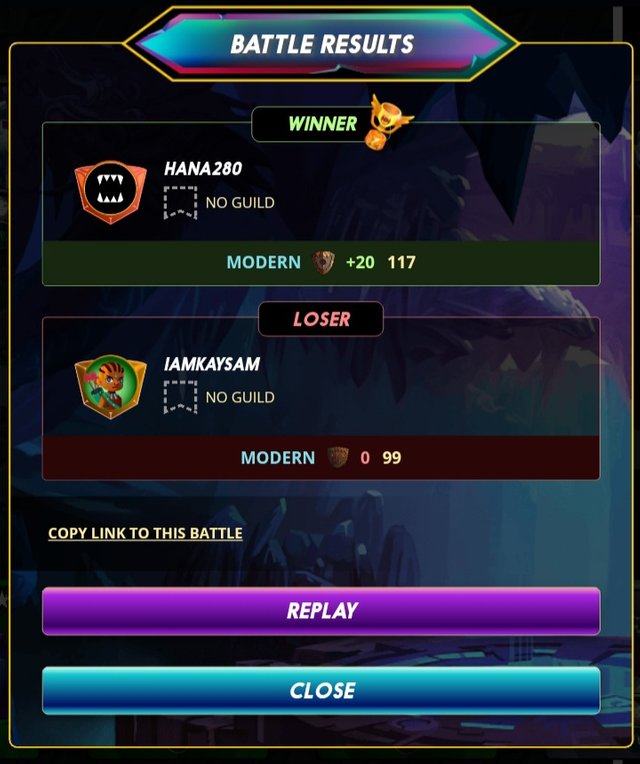 DID YOUR STRATEGY WORK?

NO!
My strategy led to my defeat.

☆ Low attack effect as compared to my opponent

☆ Presence of Scavenger instead of a more powerful attacker.

MY REGRETS! - WHAT I SHOULD HAVE DONE BETTER

☆ I should have focused more on Monsters with higher attack effect. Notice my opponent's Monsters, the least attack effect after the buff and rebuff was 2. Many others enjoyed 3 attack effect.

☆ It was a wonderful game, and I'm glad I got this experience, and I'll be able to put this into consideration next time.

Well, No I don't because of the obvious reason of not being a strong Monster (low STATS and no ability).

If you haven't joined the Splinterlands game or started playing, I invite you go join using the link below.
Click to join

Your comments will be highly appreciated as it'll help me improve my strategy and understanding of the game.

@ksam is a "uniquely creative" Hive lover who combines his musical, writing, linguistic, video and audio editing skills to promote creativity and ideas in the Hive Community. He is a "crytopreneur" and a game lover. You can follow him to view more tutorials and critical analysis of Splinterlands and PsyberX games.

O my god, I almost forgot about this famous game while I play some other games. I'll get to this game soon as possible and I will join the contests as well.
Nice play.

Still ranks as one of the best blockchain games in the world, at least for now.

You can hop in anytime
Thanks for checking out my post

That's good news. I'll hop in for sure.

Thank you so much
I'm grateful 🙏