Bitcoin, The Global Reserve Currency For The Little Guy

Inflation is currently soaring, as gasoline prices seem to have no ceiling and other commodities following the suit up. You can see that in any supermarket, online store or whatever. Meanwhile, bitcoins are fleeing out of exchanges and my take is that most of the ones doing that are the "smart money" moving the next big thing in finance out of the control of authorities.

Crypto exchanges, Binance including, have made it clear that they're aiming at bending the knee in front of any regulatory power just for the sake of business going forward. While BTC is leaving exchanges, the price is taking a diving recently... Who might be doing that(selling)?

Probably the richest of the richest in this industry, cascading the fish down the stream, but this is all temporarily and part of the plan. @toofasteddie has better detailed the strategy of the whales in shaking the waters in the market, making it quite clear what the current dip in the crypto markets actually means.

There's social unrest around the world right now and it's not just of the war in Ukraine, which turns out to be a US/NATO proxy war. Peru looks pretty much like a war zone as well lately. People have taken out to the streets, protesting, devastating supermarkets and stealing food while clashing with law forces.

One could say that Peru was already boiling for a few years and it's just 7% inflation that we're talking about right now. Just imagine when that inflation hits double digits over there. One could think that more secure countries such as Germany are in a better position, and that could be the case, but for how long... 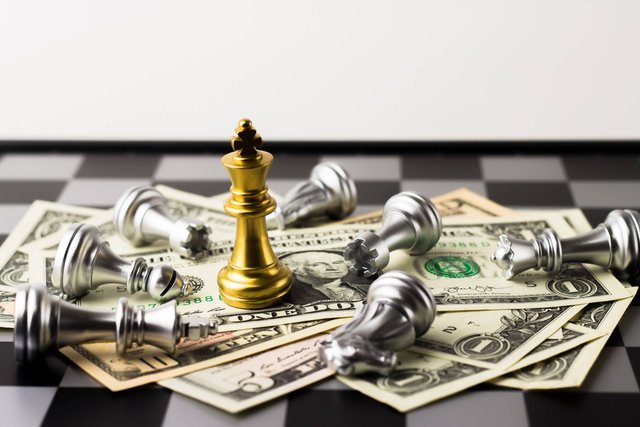 Germany, as many other countries, rely a lot on Russian gas and there's already talks on rationalizing it. In Germany a one liter cooking oil bottle, for example, has doubled if not tripled in price for the past couple of weeks. That reminding me of the early days of Weimar Germany back in the 1920's. Inflation is real and it is quite painful "at touch".

Meanwhile, MicroStrategy has taken a BTC collateralized loan for buying $200 million worth of BTC. What are these guys thinking, right?... You could either call Michael Saylor a genius or a completely lunatic right now...

The district of La Molina in Peru now accepts Bitcoin for payment of taxes!.

That sounds good, but I don't see much tax being paid in Peru right now, but I could clearly see individuals who own a bit of savings hoarding on BTC as a "global reserve currency for the little guy". Same thing happened in Turkey, Venezuela and other countries dealing with high levels inflation.

Sooner than later that might knock to your door, too.

You know what's funny? The Ruble being somehow collateralized by wheat, gas and oil... and what's even funnier is the fact that the "Russia's unfriendly nations" will ultimately pay for gas and oil coming from Russia in Rubles. Can't wait to see these bastard Germans that have ass licked America for decades, buying rubles off the market so they can "fuel their country".

What about Bitcoin as a global reserve currency?

I don't know what to say right now, but just look at Terra and its ambitious plan of buying $10 billion worth of BTC that's supposed to act as collateral for their UST(stablecoin), in its try on tacking over Visa and Mastercard as payment services. Now, all the rush and fear coming from regulatory entities towards creating the regulatory framework around stables makes so much sense.

Decentralized blockchains are not geopolitical constrained... and when you have that much tension and unrest in the world, fueled by inflation, commodities supply scarcity and governmental deceive it's almost impossible for Bitcoin not to thrive. I don't know how fast the adoption will occur, but I clearly see Bitcoin as a global reserve currency during my life time.

What you guys think?

Not likely to happen, to the dismay of the maxis. They think Bitcoin will serve all roles. The challenge is Bitcoin obliterates one of the standards needed for a reserve currency, flexibility. There is no way to achieve money equilibrium with it.

Also, distribution is vital. How much is Saylor eating up? And we havent even seen the big players enter. How is the little guy going to get some Bitcoin if central banks, Wall Street, and sovereign wealth funds are monopolizing it?

It's the minnows fault for that. Instead of buying a new car on credit they could bug btc.

I really understand the mood in a country where many are involved in the export of aquatic organisms for hobby aquarists from all over the world. Pandemic, wars, all this has a bad effect on business development, as a former owner of pet stores and an avid aquarist, I diverted the lion's share of goods from Peru to products, I think that in Ukraine, no one thinks about Motoro rays, ancistrus and other L catfish and haracin fish, inhabitants of the rivers of Peru.

Good read. I think similarly in part. Idk about Germany being a bootlicker nation, lol. Do understand its history. Have a great week. 👍

Great week to you to!