Orwellian State in the Making: How Climate Lockdowns and CBDCs Threaten our Privacy and Freedom

Climate lockdowns were part of the so-called conspiracy theory talks ever since the covid-19 plandemic started.

Individuals such as David Icke and others have foreseen the inevitability of the pandemic lockdowns, vaccination requirements, and QR codes acting as "proof of vaccination" and granting methods for access to certain public spaces, and now we're seeing another conspiracy theory on the cusp of becoming real.

The ‘15-minute Cities’ as seen below in Ottawa…are the new ‘Covid Lockdowns’. You will literally own nothing. There will be ‘climate checkpoints’. Welcome to Hell.
source 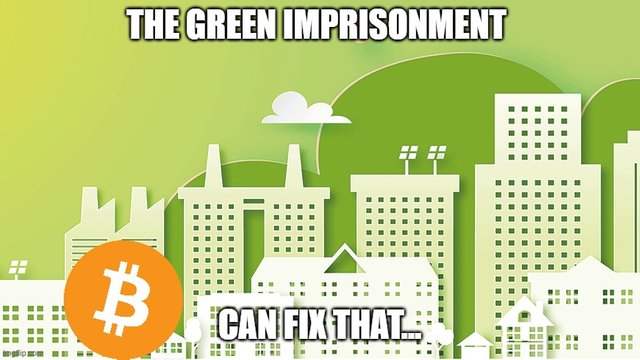 So, what are climate lockdowns, and how these could/would affect our fundamental rights and freedoms such as the freedom to move freely?...

Climate lockdowns, which involve restrictions on movement and activity in order to combat climate change, could be used as a justification for increased surveillance and control over individuals. For example, governments may implement systems to track and monitor individuals' carbon emissions, energy usage, and travel patterns. This data could be used to restrict or penalize individuals who do not comply with climate regulations.

There are already talks and news floating around about London "teasing its citizens" with climate lockdowns and carbon credits and now as seen in the pic from above, Ottawa is doing pretty much the same. Back in the days when I was living in Germany there used to be a law that would forbid citizens to access "by car" some central areas in certain cities unless the car pollution norms respect the margins imposed by the authorities.

In the near future, we might not be able to do so even on foot... And although CBDCs are not that of a hot topic anymore and some consider these to already be a failed boat of the current financial system, countries such as Saudi Arabia and The UK have not ceased to experiment with CBDCs...

Visa Has “A Number Of” CBDC, Stablecoin Initiatives Underway, too, says CEO Alfred F. Kelly. CBDCs, or Central Bank Digital Currencies, are digital versions of traditional fiat currencies, such as the U.S. dollar or the Euro, issued and controlled by a country's central bank. These digital currencies can be used for transactions, payments, and storing value just like physical cash or bank deposits.

However, CBDCs can "get dirty" against their users same as climate lockdowns would...

One of the main concerns regarding privacy issues for such digital cash is that CBDCs can be easily tracked and monitored, potentially allowing governments and other entities to gain access to sensitive financial information. Additionally, CBDCs may also be subject to government surveillance and control, which could lead to a loss of privacy and freedom.

When combined, the use of climate lockdowns and CBDCs could create a system of pervasive surveillance and control, where individuals' every move and transaction is tracked and monitored. This could lead to a loss of privacy and freedom, as well as a lack of transparency and accountability in how this data is used. And don't tell me you weren't warned about that...

However, despite the high probability of such Orwellian measures becoming part of our integrant life, there's no certainty they will actually be put in place, and we should not forget about Bitcoin, decentralized blockchains like Hive which will have an immense impact on the future of social media and the fact that it is in our hands to reject such Orwellian totalitarian measures. Freedom needs to be won, not begged for.