Making powering up 1000 Hive a habit 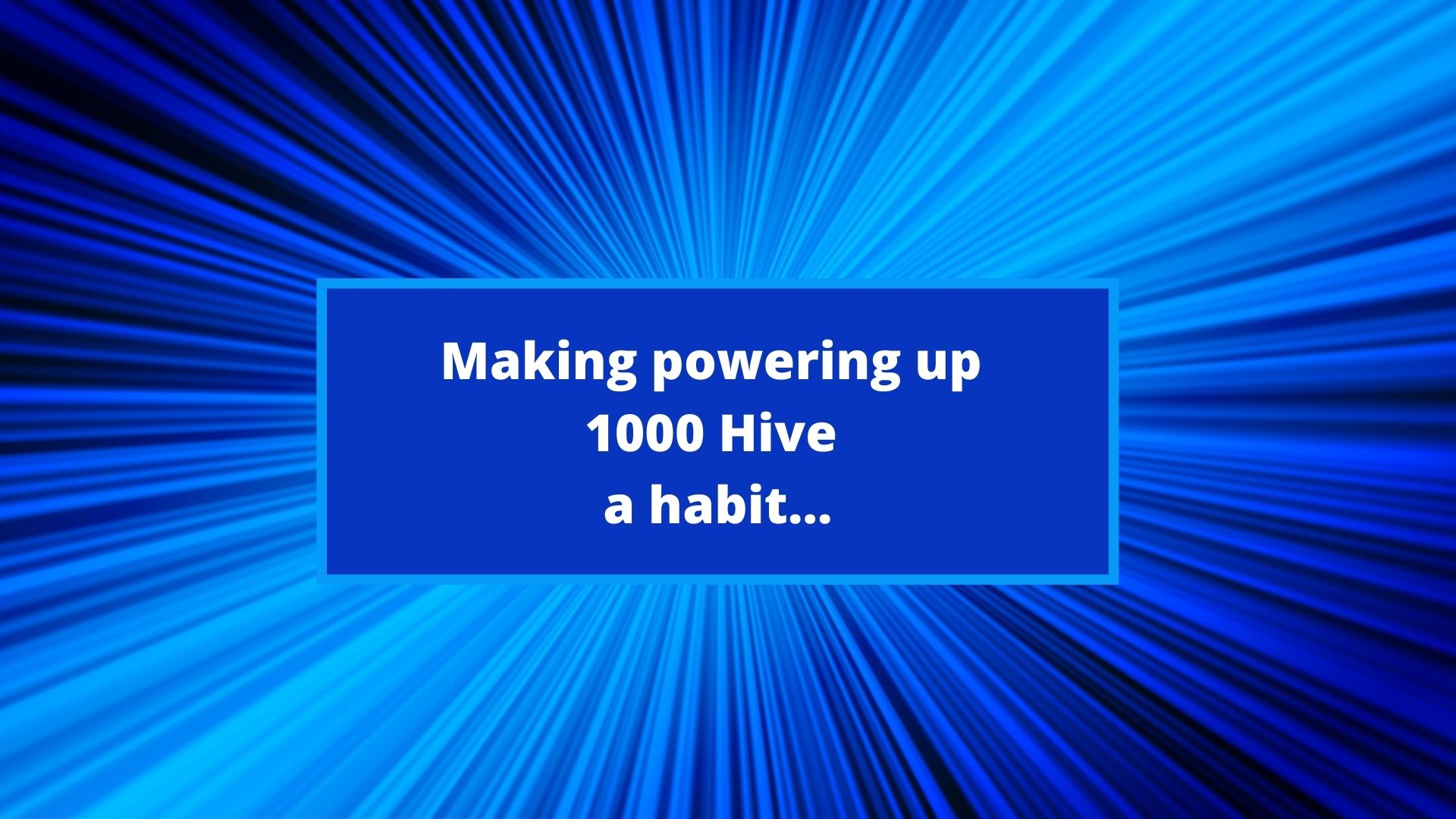 Today is the first of the new year and I wanted to start the year like I finished the last by growing my hive account. In November, I started to take part in the hive power up day and I staked 1000 hive. I then did the same on the first of December. Doing things once is an exception, doing it twice is a coincidence but doing it three times it becomes a habit. Therefore, I powered up another 1000 Hive today.

Ok, I have to admit that I'm not sure whether I can keep up with this habit in the long run. The money I use to power up mainly comes from my activity with second layer tokens and from the games. I had some lucky strikes there and I managed to put a lot of hive aside. It will be more difficult in the future but anyway I will try to go on.

My reasons for powering up Hive

I believe that in the future, it will become more and more difficult to actually accumulate Hive. The blockchain is designed in a way that will make the inflation of the token come down over time. Less tokens will be distributed and it will become very difficult to grow. At the same time, new apps will need RC to work and this will become expensive. I believe that there will be earning opportunities for renting out RC and you can only do that when you have enough Hive Power.

In addition to that, there will be airdrops coming to hive holders in the near future.

To sum up things, I believe that hive will become more expensive, more scarce and keep a lot of utilities. That's why I do everything possible at the moment to get as much Hive as possible. By staking my hive, I let it work because it generates a passive return of about 2.87% just for being staked and in addition to that I can use it to curate posts which gives me another return. The Stake also helps me to develop relationships. It helps to be able to give interesting upvotes to nice posts and to people who leave comments on my own posts.

In my opinion it's a no brainer to increase my Hive stake!

Let's connect ! You can find me on these platforms:

You were faster than me this time! Will try to follow your steps and power up a bit later today... There are many reasons to power up HIVE and you have listed some valid ones!

Let's make a habit and a routine for these 1K monthly power-ups!

Looks like we have a challenge there ;-). That could be fun, let's power up 1000 Hive Power every month as long as possible !

I had exactly this in mind lol

Hey @achim03 - well done with your power up. That is a great achievement to gain that much for 3 months in a row.

I'm quite happy about that and the great side effect is that this helps to accelerate my growth journey on hive. The more hive power we have, the faster we grow.

Good luck making it a habit! Lets see if you can do it again next month!

That's really great you can get that much HP from all the other layer tokens and games !! !PIZZA

A big part from this income comes from Splinterlands but I also managed to make some nice deals with diesel pools and curation of second layer tokens.

Ah yes, Splinterlands can be a big earner when you play enough and have a great level :') Not my case I'm losing most of time So I'm discouraged to play 😅

Wow! I would love to power up this many Hive, but do not have so many in total 🤣
Keep up the great work! I also enjoy your posts and videos!

I remember how happy I was when I reached 500 HP. This is actually not that long ago. It took me a couple of years to reach this point and I'm sure you can do the same!

Great job in powering up more hive. Yes I find it the hardest to accumulate hive compared to any of the secondary tokens. (OneUP, CTP, SPS, SPT) Mostly I am using all resources available to buy Splinterland Chaos Legions cards at this point. Working on building a solid level 2 deck. !PIZZA

It's not possible to do everything and I believe it's important to set some priorities. I think it's a good idea to build a solid deck that might allow you to get to silver or even gold levels. This will be paid off by itself in the future. On the other hand hive is the token with the biggest stability in the ecosystem and that's why it's one of my priorities.

It is something that is overlooked with so many options at the second layer but it is a great habit to get into.

People should want to grow their Hive Power as much as they can. It helps things at many different levels.

We need to start growing things and that means getting more accounts and resource credits available. That comes from Hive Power.

I believe people take this RC and Hive Power for granted but there might come a day when these ressources become really scarce. With higher Hive prices and more dapps, this might be not too long down the way and it will get so much harder to grow our Hive stake.

Thank you and thanks a lot for stopping by!

Wow 1k is an amazing power up. I don't think I will go anywhere close to that for now. The airdrops are nice and the snapshot is in a few days so I don't see anything wrong with stacking up some HIVE.

Yes the airdrops are certainly an additional incentive :-)

Congrats for the power up. I think I'll hold off until a little after the snapshots, to see if there is a dump on Hive.

It's possible that we have some price drops after the 6th and it might be a nice opportunity to get some more HP :-)

Congrats on another nice power up. I agree with you, accumulate Hive while you can because it will become more challenging in the future.

Yes I think it will become much more difficult in the future.

Man, that's fantastic! You really must have done very well to be able to do this three times in a row. Congrats!

Yes, It's mainly vouchers from splinterlands that financed that :-)

Ahhh gotcha. I made such a bad move on that. I should have sold too - I was too blinded with hype. If vouchers explode in price again for the next expansion, I won't make the same mistake.

Wow Achim, 1k power up again, a habit indeed and an impressive one, I wish you good luck in keeping it up and a Happy New Year ahead, stay awesome.

This post is AWESOME!
It will therefore be highlighted in our daily Curated Collections posting for today.
The goal of this project is to "highlight Awesome Content, and growing the Hive ecosystem by rewarding it".

Thanks Erik. Hope I will be able to go on with this habit lol

Yeah if you make the decision you will find a way.

Amazing @achim03
Well done not anywhere near ready to do that yet.
But good job you😉

Yes, agree that having voting power and RC are important benefits to accumulating more Hive! :)