My curation rewards on Leofinance started increasing after Linear curve

I was really a big fan of the Flat reward curve. When Leo Finance said that they have changed from a non-linear reward curve to a linear reward curve, I was very happy. I also wished other tribes and even Hive adopt this model. I did not speak about this to anyone in detail as it was purely experimental. But after a week, I'm starting to see a great improvement in the rewards I get for curating. I initially thought this may not have enough advantage but the below screenshot proves how my rewards have increased drastically. 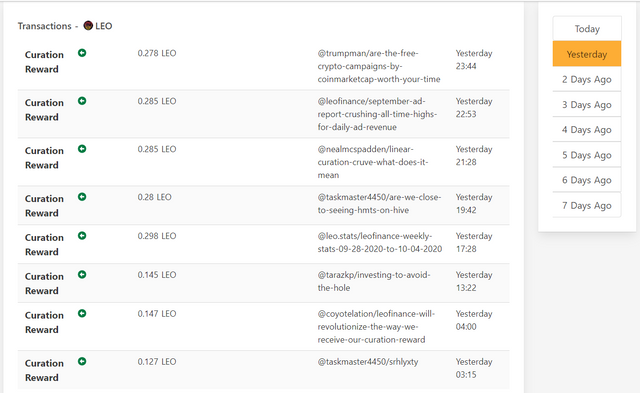 It would take a little more experiment before we conclude this is the best rewarding model. But right now this seems a good thing for me. A fair reward distribution to everyone. Even before the introduction of the linear reward curve, I was doing the curation manually. Though sometimes it is hard to find quality posts especially from the new authors, I still preferred manual curation and not automating my votes. To be honest the biggest reason was that I was very lazy to code something for it. I couldn't use Steem auto for the same as it doesn't have tag-based filtering.

From the above screenshot, you can see how my rewards increased drastically after this new change. I guess I almost get 80% more rewards nowadays. One good thing about the linear reward curve is that I don't have to worry about the time I cast the vote and the existing pending rewards the post has.

In order to support the manual curation initiative, I also started following the curation trail of the leo.voter account. I believe that account is doing a decent manual curation compared to all the other accounts that vote only the same set of people again and again. I don't mind the same set of people getting rewarded but there again a good distribution of rewards to the new bloggers would be more beneficial for the community growth and will also act as a great incentive for them. Of course, it is just my personal opinion. I was even lazy to pick new authors and diversify my votes.

The time I choose to vote now is giving me an equal 50% reward based on my vote value which was not the case earlier. I usually vote after all the big votes are done already. That used to reduce the rewards I get from curation. Now that the reward curve is flat, I'm able to get better rewards compared to earlier. I'm sure there would be many people like me who would benefit from this. I understand that the early voters are no longer getting extra benefits for their early curation. But I personally feel that is okay compared to reducing the manual curator rewards.