Every time I turn on the fintech news, all I hear is some form of borrow, borrow, borrow, print, print, print. The economy needs more stimulating then a teenage boy in the 90's when Xena Warrior Princess would come on TV. Yes, you know what I'm talking about, don't shy away from it now.

The number of bank reserves being created to purchase debt instruments and the need to continue lending to create new money is at an all-time high. Everyone who is anyone is feeling the pinch is calling for bailouts of companies, the forgiveness of loans, free money sent directly to your account.

All we hear is how we need money now, it has to be done now, but we're not talking or thinking about the future. Why think about the future if we're not going to be around to see it right? The things we're doing now won't be an issue for 10 - 15 years but 100s of years. 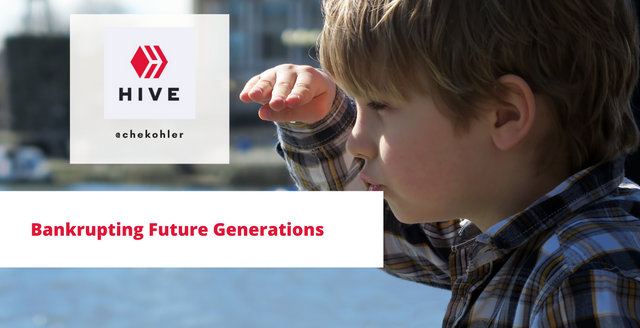 A bottomless pit of debt dispair

There's not much I agree with when it comes to Greta Thunberg, but that loveable Swedish meatballs rant about promises of endless economic growth was spot on. I'm all for the improvement of the lives of all of us, a better society, where abundance can be spread, but not at the cost of other people.

We've lived that for too long, where others are marginalised for the gain of a few that plead ignorance of innconce. We complain about the rich, the rich countries, the totem pole of who is on top of who, but we're doing the same thing to the next generation.

Born to be broke

As someone who was born in apartheid I always felt like hey I didn't ask for this shit by birth and I feel its going to be the same for the next 3 generations. They're going to have to pay off this debt should we continue with this system, theyr're going to have to live well below their means to save money to pay it off and pay for our greed and need for instant gratification.

When I see the call for more free money, I don't see help, I see lip service. We all talk about a better future, giving the kids the next generation a better chance, every time you borrow money on this level you effectively telling those kids, to go fuck themselves.

You're telling them, look we're more important than you, so we're going to live above our means, so you can suffer for it once we're long gone.

Just like kids having to deal with a parents inability o pay back what they borrow, or gambling debts, we're saddling the next generation with more and more debt and saying you'll be fine, you figure it out, even when we didn't.

We're not giving the next generation to the same footing to start from scratch; we're telling them you have to start knee deep in the hole.