Has The Corporate Accumulation Phase For Bitcoin Started

As the the worlds greatest debt cycle begins its last leg we're seeing new money creation at an all time high, the US fed are creating new bank reserves by the trillions and has amased more money in this year alone than it did between 1966 - 2010 which goes to show you the gravity of the situation.

The US may be creating more reserves but they need to allow for it to create breathing room for other countries central banks to use that new liquidity to borrow to create their own money as it's all in a pegged system.

Governments are currently desperate to inject new funds into the economy in a race to devalue their currency faster than the debt that needs to be paid back to keep the economy afloat.

This may be good for leveraged companies but those who have managed their funds and have cash, are losing and seeing their treasuries obliterated at faster rate than ever before.

The penny has dropped

It looks like businesses are now starting to look for inflation hedging assets and so far Bitcoin looks to be picking up traction. Three large comapines have announced they have taken a position in Bitcoin as that's only the ones we know of, there are many private companies that have no need to let anyone know and could be building up war chest quietly in the background. 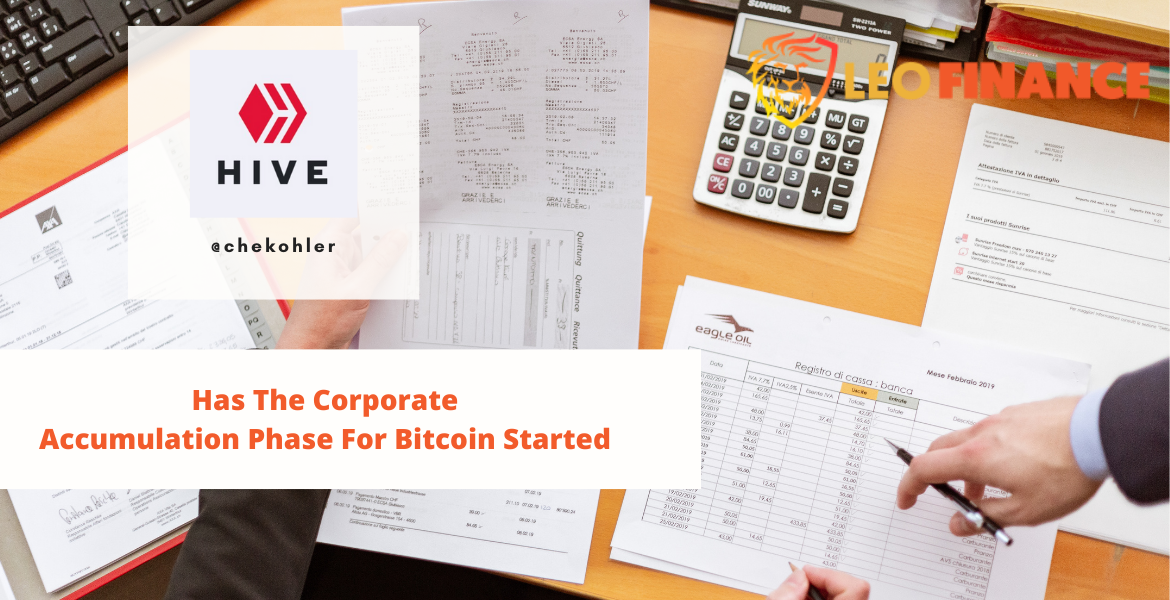 Microstatgy has been the biggest player so far to take a stake in Bitcoin with over $400 million and I've already spoken as to the reasons why it's a brilliant move for them. Micheal Saylor has now become the unofficial spokes person for the idea of adding Bitcoin to a corporate balance sheet not only because he is the first but because he took such a large position and a large percentage of his treasury.

It's by far the most bullish thing a non-crypto business has done for Bitcoin and I feel as it proves a master stroke for his business, so too will other business follow, only to remain competitive.

Recently Jack Dorsey CEO of Twitter and Square who has the word Bitcoin as his Twitter Bio announced that his payment startup Square have purchased $50 million in Bitcoin.. This is the first in your face move by a popular Silcon valley figure and I think that this only reinvfoces the chatter going on in corporates boardrooms and I am sure Jack is going to be consulting for many businesses to help them to do the same, especially in the start up scene.

Recently Canadaian restaurant chain Tahinis announced that they have joined the Bitcoin standard and to me this is huge because it's a non-tech company realising the value of Bitcoin.

They do not accept it as a method of payment, all they have done is convert their cash reserves into Bitcoin instead. For a company that has small margins like the restaurant business and requires liquitiy to run this is super bullish and I have to say a little brazen on their part but I do hope it works out for them, This could be case study for how the non-tech business can benefit from Bitcoin.

I've realised the benefits for Bitcoin on my personal balance sheet and continue to add to my positions every month. I have also begun to secure Bitcoin for my businesses balance sheet as well. These are long term cash reserves I do not wish to spend and as things progress I will be looking to become more aggressive only keep operating capital in fiat.

I am playing this very conservatively business wise as we need cash to operate, pay bills and salaries etc.

Howver on the personal side I am far more aggressive in how I accumulate Bitcon. I buy each month with my DCA, as well as every day, picking up small amounts.

If BTC breaks below a 20% range in any given period I will also buy in then to continue to lower my average buy in price.

Strenghthining both my personal and company balance sheet with this asset gives me more confidence and with companies like the names I mentioned doing the same, I feel I am in good company.