Why I'm Giving The Koinos Mining A Miss

So Koinos mining launched yesterday, and a few people have already jumped in I think there are well over 100 token holders who have mined the token already. There's going to be something like 100 million of these tokens kicked out over the next 6 months, and we all love some free money, don't we?

I downloaded the miner, send some ETH to check it out, jumped into the discord to see what the buzz was like and we were off to the races. The miner kept bugging out when I started using it, and I had to change the ETH endpoint a few times to get it started, naturally always teething issues with things like this. Still, it did leave me feeling a little salty watching others posting their first koinos deposits, and I'm sitting with errors lol.

So depending on your willingness to send proofs you mine through you can change the frequency and then pay the gas fees for the proofs you send and then cover the fees for the tokens you earn.

So you've got to use your PC's resources to complete these proofs and then pay the fees to submit them, yeah I get it but will the token price be worth the fees you pay over the next 6 months, who knows? As more people jump into mine, your potential allocation gets eaten up and so what you might be getting now won't be the same later.

Yes other people will drop off during the 6 month mining period, so if you remain consistent you can probably average out a good stake, but unless you have a PC just to let run day in day out that you're not going to use, I don't think you'll be doing that. 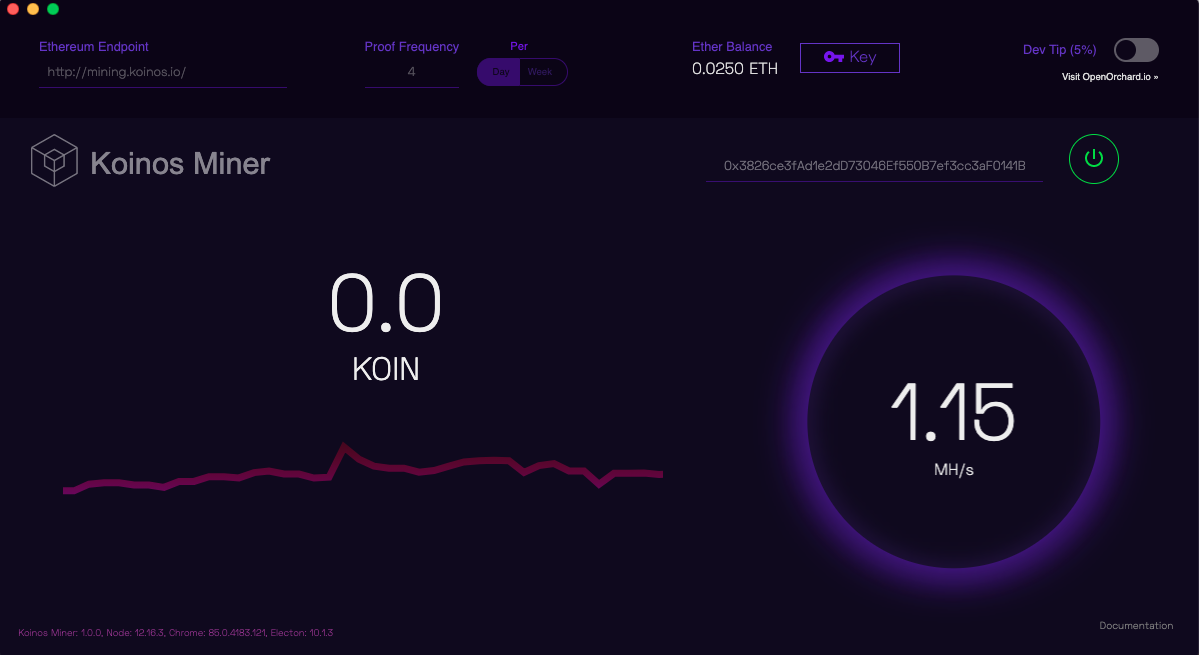 My sucky internet and GPU

I'm in South Africa, our internet is shit and my Macbook ain't exactly the device you want to be jumping on to mine with, I just wanted to test it out, and I was pulling between 1 - 2.3 MH/S so not much and with returns like that I'd rek my laptop for a few potential cents, Nah I'll pass.

My PC makes me money

Since my laptop is how I make money, I'm not going to let this thing run on a miner when I could do work on it and earn me cash. Even this post is earning me more than I did mining lol, so why should I bother? I guess passive returns I guess, but as for how much that will be, that's anyone guess.

Since Koinos is an ERC-20 token, for now, you have to pay ETH/Gas to receive your coins. Eventually, you'll have to move them if you want to sell them or use them in an LP, that's more ETH, so depending on the number of transactions, you could be racking up fees.

Instead, I'll save on that and once it's live on Uniswap buy the token and add it a liquidity pool and net me some returns as the first miners will look to sell and set this new market.

If you're not jumping on the mining train and you see posts about it and hitting that FOMO, but you don't have a decent device just to run this shit in the background, don't feel bad, just participate differently, not everyone is meant to get in on the ground.

I very much doubt this mining operation will launch the project with a lot of decentralisation and from looking at the wallets already, I think that assumption is correct.

This means very few people sitting with a shit ton of coins as is the case with most projects, to realise any profit, the first few coins are normally dumped so you could swoop in on that first stake that gets spent to cover all the mining fees first before miners now look to profit.

The mining isn't the product

I have no doubt the koinos team have solid dev's and are going to launch something really cool, and wish them well, but I'd much rather buy the token on a presale or from miner who has given up then try to mine it myself. I don't need this project to make me rich, to make me profit.

Who knows I might be able to get it mad on the cheap with a lot less effort and still capture some of the upside should this project be successful.

So for now, I'll earn somewhere else and set aside a stake to buy Koinos when it actually has a trading price.