Have you ever experienced a delay in the transactions on the Hive blockchain?
Guess not. Me neither. Apart from the HF’s 😊, this blockchain has been running as smooth as possible. Especially when transferring coins. 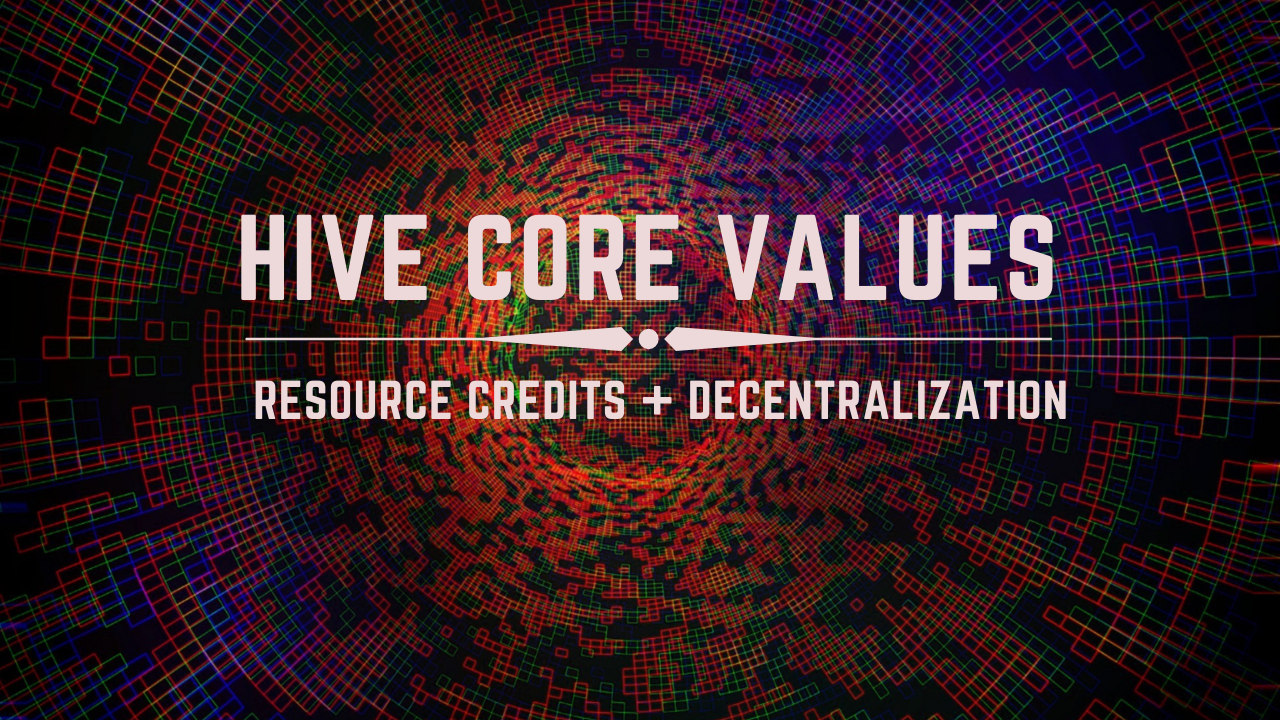 Hivers are so used to the fast (3 seconds) and free transactions that they almost never appreciate this. Only when they go to a blockchain like ETH, when the fees are skyrocketing at the moment, then they start to appreciate the free and fast transactions on the Hive blockchain.

Free transactions can be a double edge sward. They do allow users a smoot experience, but at the same time they open the door for spam and countless of useless transactions. If these transactions are recorded on the blockchain, it can grow in size fast and a lot, challenging the operation of the blockchain. At some degree this happened with EOS, that at this point is around 5TB in size compared to Bitcoin, around 300GB and ETH even less than that.

What are Resource Credits?

The easiest way to explain RC is Hive Power. To a regular user Resource Credits (RC) are equivalent to Hive Power (HP). The more HP you have the more RC you get.

On the other hand, RCs are tied to HP. The amount of RCs is proportional to the amount of HP one has. When someone delegate HP to an account he is also delegating RCs. In this way the account is able to transact on the blockchain, but it also has the ability to vote on post/witnesses/proposals and earn rewards.

At the moment RCs are non-transferable and tied to HP.

RC on Hive can be compared as gas on Ethereum. You need it to make anything on the blockchain.

Going forward there will be a possibility to separate HP and RC trough RC delegation.

What this means is that one can delegate RCs, the same way HP is delegated, but without the financial aspects of it. What this means you will be able to delegate units (RC) that are only used for transacting with the blockchain and not for rewards distribution.

This will be another way one can earn from its HP by leasing out the resource credits that come with it.

Why are RCs important to dApps?

If we take a look at the leading dApp on the blockchain, Splinterlnads, recently they have announced a change in the account creation. This is due to the cost behind creating account. Account creation is one of the costliest operations on the blockchain in terms of RCs. We will be looking at the cost of the individual transactions bellow.
LeoFinance, another dApp on Hive that is looking to onboard more users on the blockchain is also emphasizing the importance of RCs and implementation of RCs delegation.
RCs delegation is very important for creating a lot of new accounts and onboarding on massive scale.

How much does individual operations cost on the Hive blockchain

If we take a look at https://hiveblocks.com/@dalz we can see the individual cost in terms of RC. 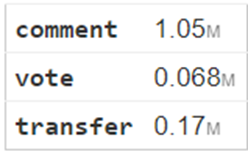 In 5 days, RCs is recharged so an account with 1HP will be able to do these transactions every 5 days.

As already mentioned, this can change depending on the usage of the blockchain. The transactions now are cheaper in terms of RCs when compared to a year ago.

A more detailed information on RC cost are provided by @holger80 on this link https://beempy.com/resource_costs 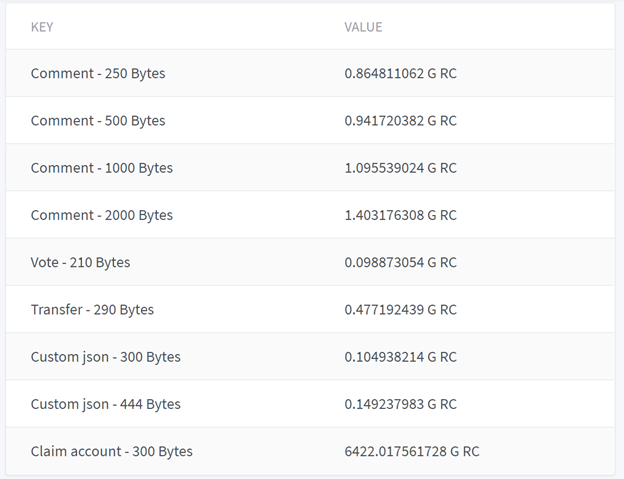 As we can see from the above comments/post are categorized depending on the size of them. The previous example is for a comment/post with 1000 Bytes size, that costs around 1 000 000 000 RC.

Interesting the values for the other transactions are not the same as the ones shown on hiveblock. Votes on hiveblocks cost 68M RC, and the above is almost 100M. Transfers 170M to a 477M. In the example above there is a value for the size of the operations, so it is most likely more accurate.

We can see the cost for a custom json transactions as well, from 100M to a 140M, depending on the size. At the end the cost of claiming a new account which is 6422M RC.

As we can see large posts with more than a 2000 bytes size are the costliest operations on the blockchain (except for claiming accounts). A large custom_json transaction can also be costly.

Again, a comparison with Ethereum. Ethereum recently hit a 300 gwei cost per transaction. This is around 30$ for a simple transaction of transferring coins. Now its bellow 1$.

I’m making these comparisons because Hivers have never experienced a congested chain. The cost of RC has never been so high so hivers will pay any attention to it. But it is there. Only much more scalable than ETH.

When the usage of the chain goes up, the cost of the transactions goes up as well.

How to allocate blockchain resources and price them properly is a science. If you have used other chain, like ETH or EOS, you will notice there is more than one parameter. On ETH you have gas price and gas limit. The first is the cost, the second is the complexity of the transfer. There is a difference between a simple token transaction and a smart contract transaction. On EOS you have GPU and CPU. Again, more than one parameter and way to allocate blockchain recourse.

The resource credit system on Hive is a single number that combines a few factors in it:

Ill not go in details above the above and will put a link bellow for further reading for anyone interested. The main point here is depending on the parameters above the blockchain will determine the cost of the transactions in RCs. Its not one single factor that is used to determine the price but a multitude of them. Before the RC system, there was a bandwidth system, where the main parameter to determine the cost of a transaction was the size of the transactions. Because of this there was more spamming back then. After the implementation of the RCs system the spam is lowered.

If in near future, we come to a point where this blockchain is started to being congested we will se the price of RCs going up and the transactions on the blockchain becoming more expensive. If this happens in an organic way, it is a good problem to have. It will mean that the chain is used a lot. Then we will se RCs at there full capacity where a delegation pools will be used a lot.

Blockchain security is extremely important. Investments in millions goes only if the blockchain security is at high level. Security is provided trough decentralization and having no single point of failure. Hive has gone through the ultimate test.
It was sybil attacked with a purchase of a large pre-mined stake. Now that stake is gone. There is no single entity that controls that much of a stake that can attack the chain in the way it was before. At the same time there is enough users and stakeholders willing to participate in the ecosystem. The blockchain is much more secure and decentralized now then it was before.
Also, there is a 30-day non-voting rule for newly powered up stake that basically neutralizes the stake on exchanges. Because as we have seen the second major treat can come from stake on exchanges.

A lot can be said about decentralization and the different aspects of it, but here we will just stipulate in short that Hive is more decentralized and more secure than a year ago.

If we look at the @arcange chart on stake distribution on Nov 1, 2020 looks like this.

The largest know stakeholder, the @freedom account owns around 13M HIVE, or 3.5% out of the total 373M HIVE at the moment.

We can see that more than 10k accounts hold a share of the token. This might not seem a lot but for a blockchain project is great. Apart from Bitcoin and Ethereum very few projects can say they have more than 1000 legit stakeholders. Furthermore, then 1000 significant stakeholders. Ill do a dedicated post on the level od decentralization on Hive compared to the other coin.

Obviously the above is not the whole picture. The core value to a project is the idea and the community behind it. The above is just a part of the puzzle. There is more to Hive than the system that manages blockchain cost and decentralization. There is a lot more to be done so these things can take into full force. More apps, more users, more marketing. But their need to be a stable system to support all the above. Having secure and scalable blockchain with years behind it can means a lot.