At the moment Hive accounts can be created with Resource Credits (RC) if the account has enough Hive Power to claim accounts, or they can be created by paying an account creation fee that at the moment is 3 HIVE. Creating accounts is the most expensive operation on the Hive blockchain in terms of RCs. 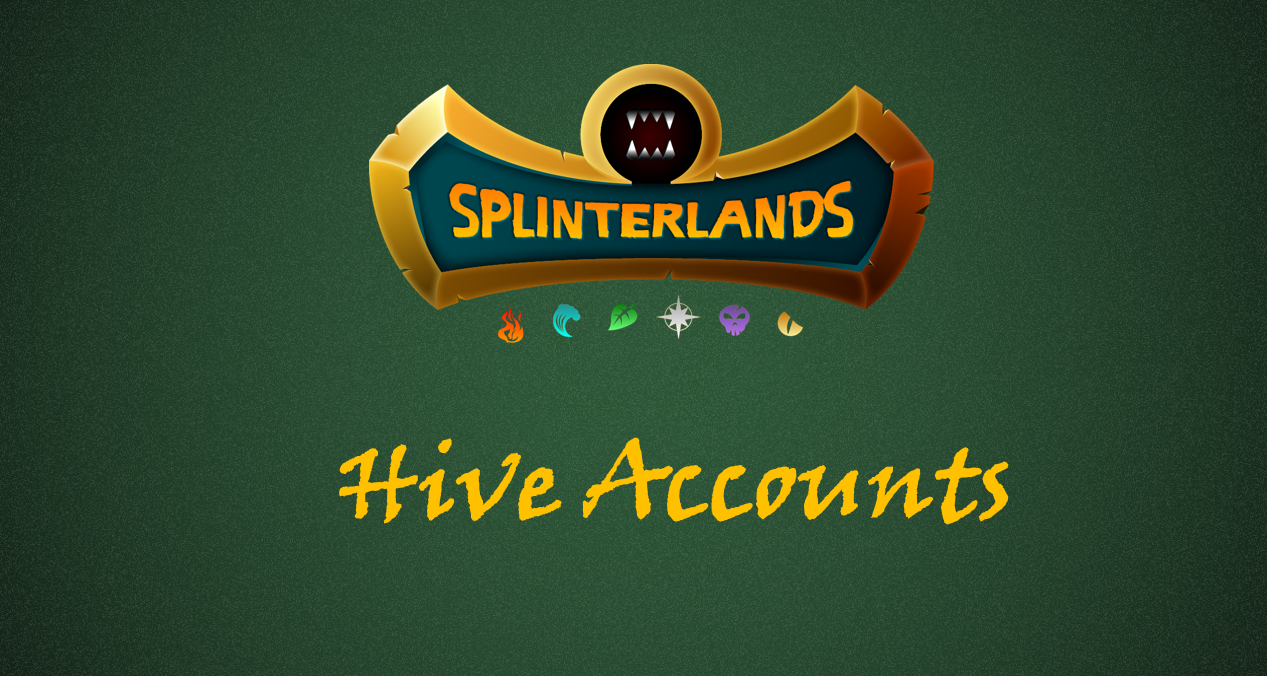 Splinterlands have seen a massive growth and influx of new users. All of them need Hive accounts to play the game. Because of this the game has been creating around 10k Hive accounts per day in the last weeks. The account creation tokens were not enough to cover the demand and Splinterlands was simply paying the blockchain fee for creating accounts.

I decided to take a closer look into the account creation fees after my recent post on the HIVE Suppy, where I noted that I haven’t taken into account the fees for creating accounts. At the time I was thinking that this is a low number. @ausbitbank run some queries and pointed out in the comments that the overall HIVE spent for this is around 3M and just in 2021 it is around 1M. Thanks for him for this note, and I decided to have a closer look, since these numbers are not insignificant.

Here is the chart for the all time Hive accounts created per day, starting from March 2016. 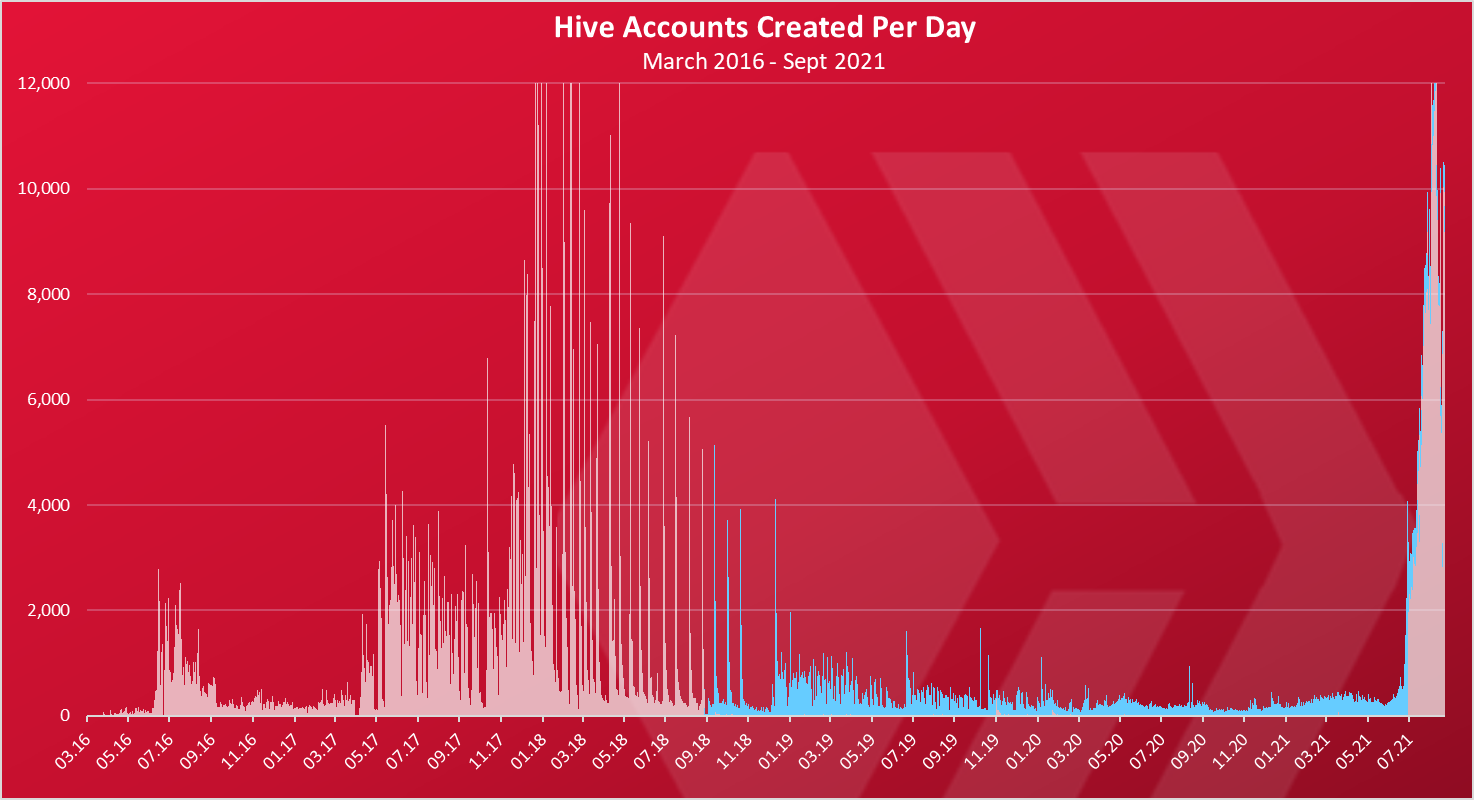 The bluish color are accounts created for “free” with RC credits. The term free is not exactly correct since RCs were used for this and you need HP, but there was no fee paid in liquid HIVE, so we go with that term.

As we can see here the first peak for new accounts was at the end of 2017 and the beginning of 2018 in the previous bull run. At that point there was more than 10k accounts created per day. Then a drop in the bear market and again a recent spike in the last few months, but this time more constant than before. At the moment of writing this there is almost 1.9M Hive account in total.

What interesting is that in the beginning the fee varied a lot, it was 100 HIVE in the very first days, then there is 10 and a 5 HIVE fees. At one point they are 0.5 HIVE. Later it would stabilize for a 3 HIVE fee that is now.

If take a look at the monthly chart we get this. 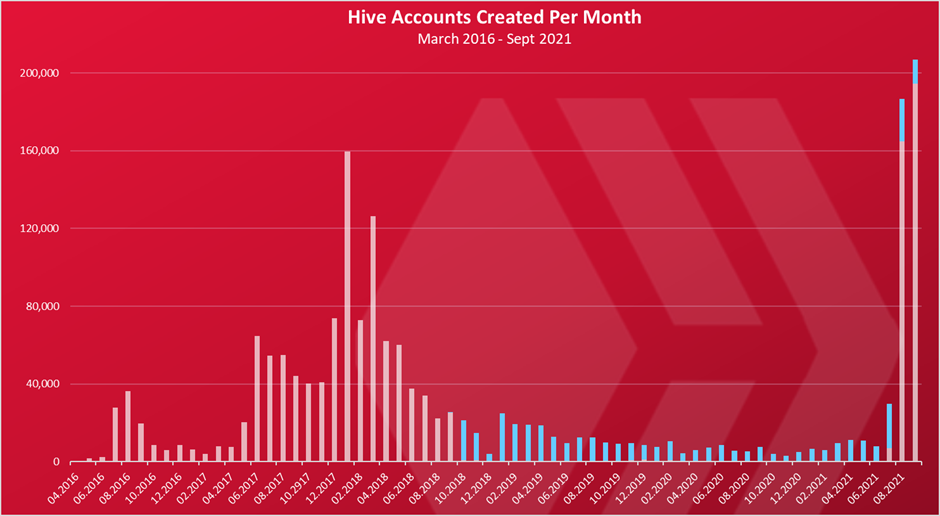 The last column for September is not over yet.

August and September are record high in terms of account creation per month. August has 186k created and September is well over 200k now and it will reach somewhere in the range of 250k to 300k new accounts.

Compared with the previous period these numbers are well above when there was around 10k accounts created per month.

The yearly chart for new accounts looks like this. 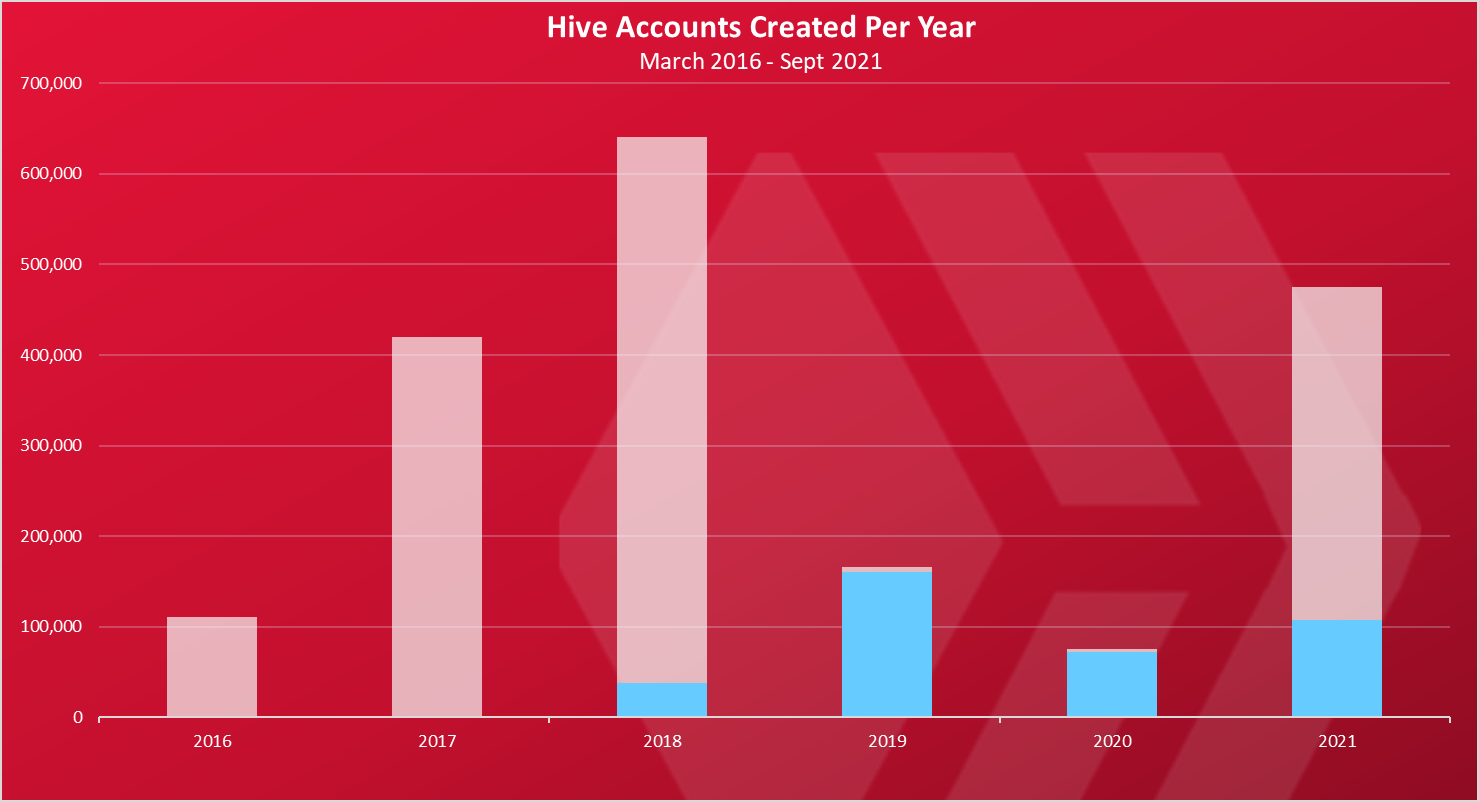 2018 is still the year with the most accounts created, 640k but 2021 has a few months left and if the tempo for 100k to 200k accounts created per month continues there is a good possibility to be the ATH year for new accounts.

For better representation we will take a look at the monthly and yearly chart only.
Here is the monthly chart. 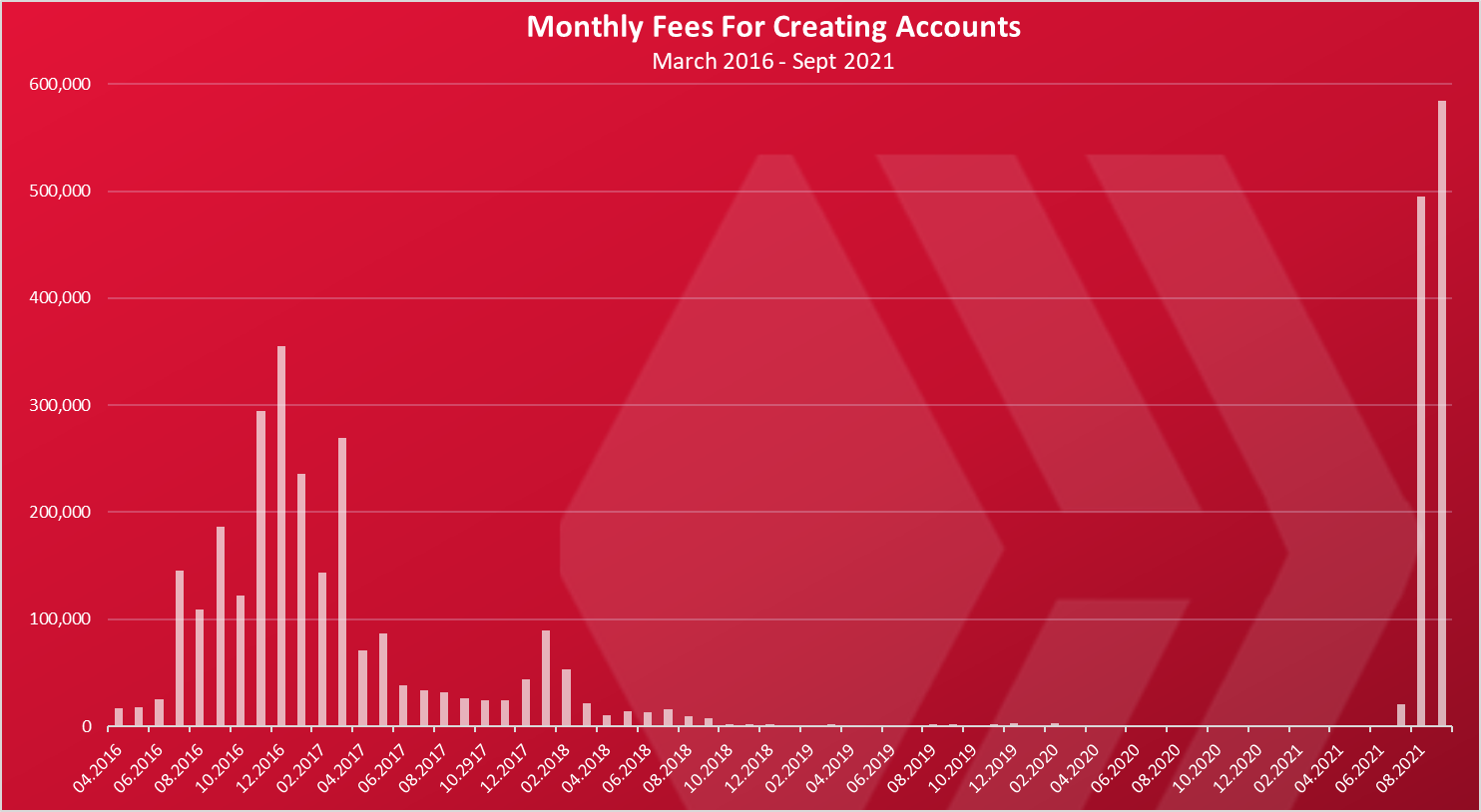 Again a note on the last column that represents September that is not over yet.

Here we can see that in terms of fees the last two months have been a record high months. In August 2021 there is almost 500k spent in fees for creating accounts and September is now at almost 600k and it will end well above that number.

It should be noted that since Steemit Inc was creating the accounts this fees were coming from the tokens they already had (premine 😊), unlike now when Splinterlands is using their funds to cover for the account creation fees.

The yearly chart for the new accounts fees looks like this. 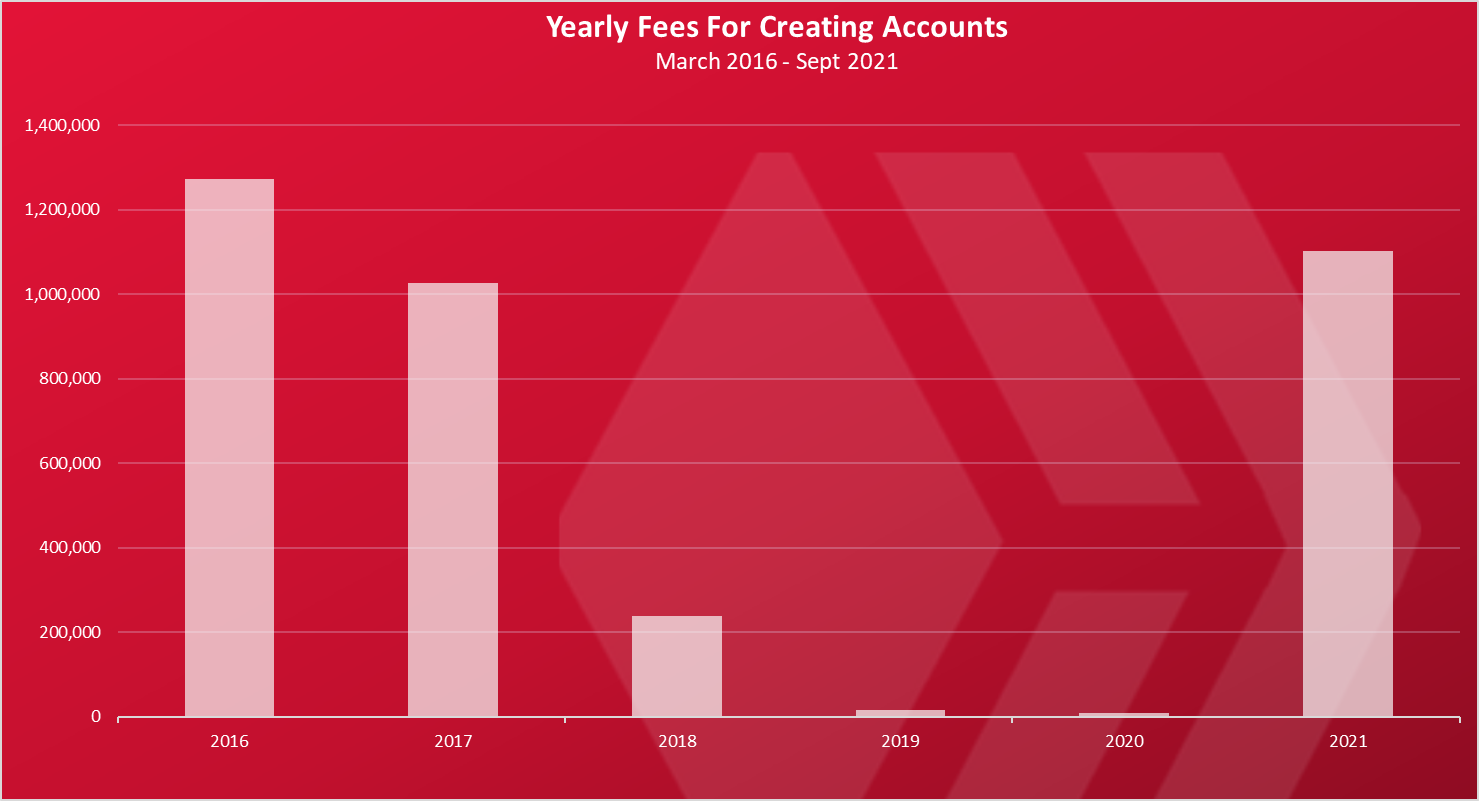 The point from the above that in 2016 less accounts were created, but more fees used can be seen here clearly. Accounts creating fees were just more expensive then. I’m not totally sure but I think the fee for new account creation is set by the witnesses.

2021 now has 1.1M fees in HIVE for creating new accounts. Will see how it ends, but most likely it will surpass the 1.27M from 2016. Again, a note that the fees back then were all covered by Steemit Inc, while now Splinterlands is using their funds.

Just to point out the share of Splinterlands in the new accounts creation fees, here is the pie for 2021. 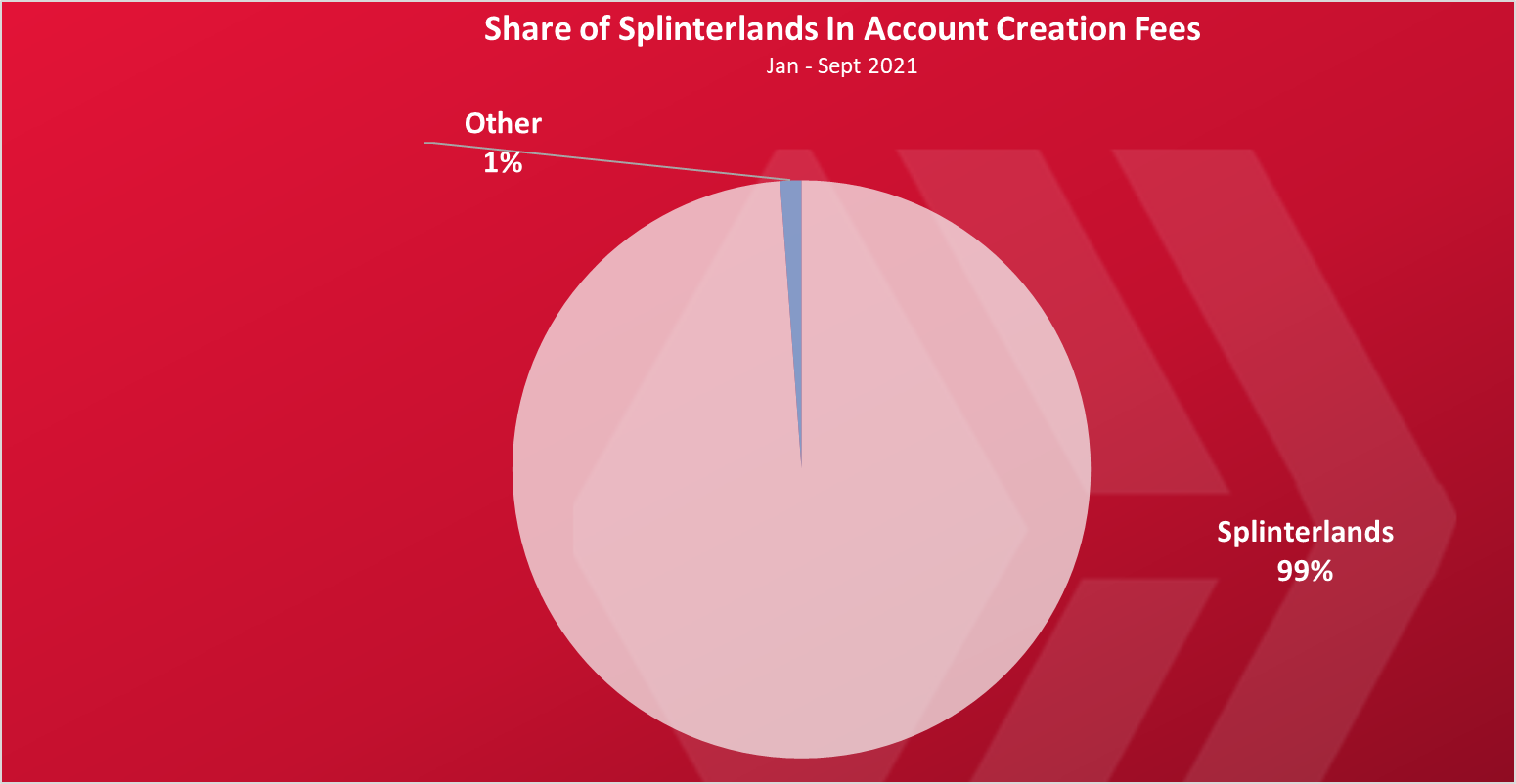 99% of the fees for new accounts are paid by Splinterlands.

The 3 HIVE fee is probably ok for the current price of HIVE, but if the price goes up, I guess it will need to be adjusted.