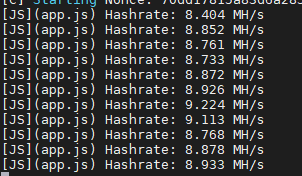 After @bluerobo and @emrebeyler told me to mine Koinos I must admit that I was a bit skeptical. However, just a few days later my gang members @cadawg and @rishi556 also suggested it too right after them, @edicted and @foxon got into it as well. Lo and behold, everyone started mining Koinos today.

So I was like... why shouldn't I? Well... there is very simple answer for that. It is technically PTM - or in other words - pay to mine. Forget electricity costs or anything else, you need to pay Ethereum so that you can mine this token. This will probably be a turn off for many, however, I've had my luck before in various altcoins.

Although it is currently delisted and worth basically nothing, 2 years ago I found some random coin that was called "Minexcoin" their promise was to create a debit card that you can fund with Minexcoin and use, of course, that never happened but the hype was there.

As the difficulty was low, I shrugged and started mining. Worst case scenario? Maybe a few dollars in electricity bill. That's it. At the end of the week, I had mined like 200 Minexcoin. Well, truth be told, something happened that I NEVER expected. Minexcoin was worth $65 at one point. Unfortunately, I had sold my 200 Minexcoin early on at about ~$20 so I missed the big pump but hey, it was still a nice profit.

So basically trying the same thing. Since Koinos is mostly made by previous actual STINC devs, it might have some interesting future laid ahead for it. So, it doesn't hurt to mine some and throw on the side.