Is BITCOIN a world changer or a deep state honeypot in disguise?

I warmly enjoy reading zerohedge articles and their comments, it reminds me about legacy social media, where it seems that everyone has firmly held convictions about every topic, and they don't mind fighting about it in public.

Whether the issue is China, Natural Gas, Israel or Russia, President Joe Brandon or even technical topics like Silver prices or the VIX, you can expect to enjoy some great shilling of deeply divided viewpoints in the comment section.

But nothing beats the crypto articles.

I know the bull case, I am involved in cryto for more than 4 years after all. So its mostly the 'no-coiner' bear shills that interest me. Its fully of interest to me the deep divide on the public sentiment on display, and I wanted to take some time this morning to review both sides of the (bit)coin.

Bitcoin is the best

Surprising to me at first is the lack of alt coin shills, there are some shilling ETH, but its funny (as someone quite involved with the ~250 ranked coin) how few people mention any other piece of crypto technology.

For ease of research, I've decided to pull all examples from a recent article entitled Crypto Slide The Result Of A "87%-Off" Binance Fat Finger.

The positive case for bitcoin generally rests on 3 premises, that it is 1 - secure, 2 - new revolutionary tech and 3 - adoption is increasing.

Bitcoin is the worst

The arguments against bitcoin are a bit more numerous, but I will attempt to identify and sum them up for you here.

Bitcoin is fake (digital) and gold is better

Most people on Zerohedge agree, the dollar is dying, but one of the main disagreements is whether GOLD or BITCOIN is the answer. The comments on zerohedge heavily favor gold, and one of the reasons is that Bitcoin is 'just' 1s and 0s.

The fact that gold (and silver) appear to be heavily manipulated to the downside for years doesn't seem to matter, since 'gold is better'. 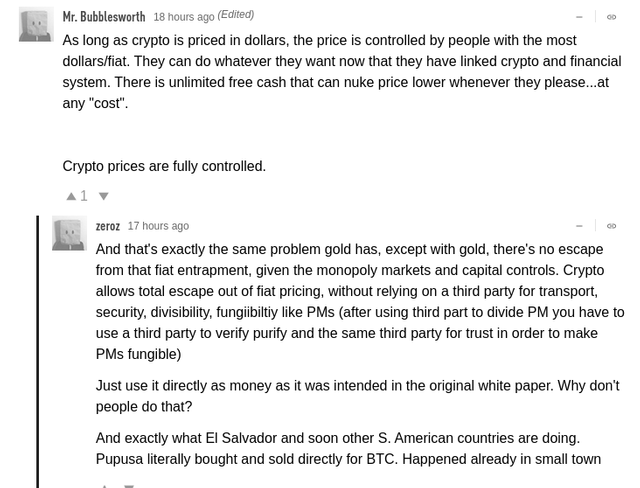 Bitcoin is a ponzi and will collapse to zero before long.

Who is the most nonsensical - he who plays a rigged game knowing its rigged, or he who hoards digital assets? Surely the central bank scheme is a ponzi and, to give the argument its due, bitcoin remains to be seen if it is a ponzi, after all there are a lot of early bitcoins that haven't moved in years.

Bitcoin is inferior to Facebook's Diem

I guess this guy has never heard of HIVE/HBD, but not withstanding other coins like LTC which I send all over the world for a penny, I think this is a reasonable argument to make - what good is this tech that many governments are trying to ban when a 'better' one is about to come out from 'global trusted leader' facebook?

Okay perhaps not the most elegant response, but basically, I don't trust Facebook, I'll never use their tech. Here's the rebuttal: 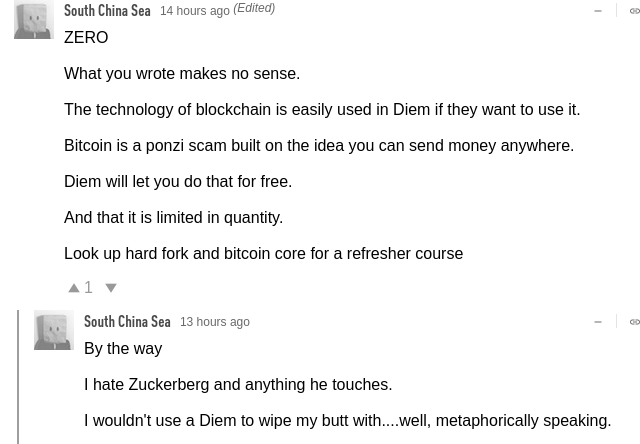 I think, taken to its logical conclusion, this is one of the weaker arguments against bitcoin, but for subtle reasons. Sure Facebook could use Bitcoin technology in their Diem, but if they were to fork bitcoin why wouldn't they just use bitcoin? And for any of the parts they do use, like say 'blocks', they will surely add in new parts that will make Diem a centralized database controlled by facebook, and we have already seen how eager facebook is to please governments around the world.

So let's move on. 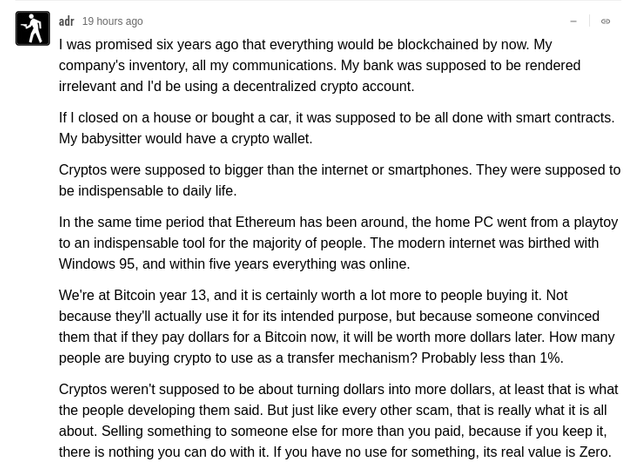 Blockchain and Bitcoin hasn't changed the world yet, so it never will. We gave it a few years, but since my text messages aren't on the bitcoin network, and I can't yet pay the babysitter in crypto, this is all just a failed experiment, in fact a scam.

The only use for Bitcoin is to sell it higher to a Greater Fool - get out while you can!

The price is inflated, and will crash back to tulip bulb prices any day now.

Its so volatile you'll lose sleep!

This is a real concern, as checking crypto prices can become an addiction. I would counter that this is prevalent for day traders and stocker traders of all kinds - if you are going to invest your money learn how to size your positions correctly as not to affect your health.

Of course if its all about the money, why don't you just buy stocks? Could it be the debt-laden companies have inflated valuations with enormous P/E or CAPE ratios?

The last concern was clearly on display in a different article entitled Peter Thiel: Here's Where I Would Look For Bitcoin-Creator Satoshi 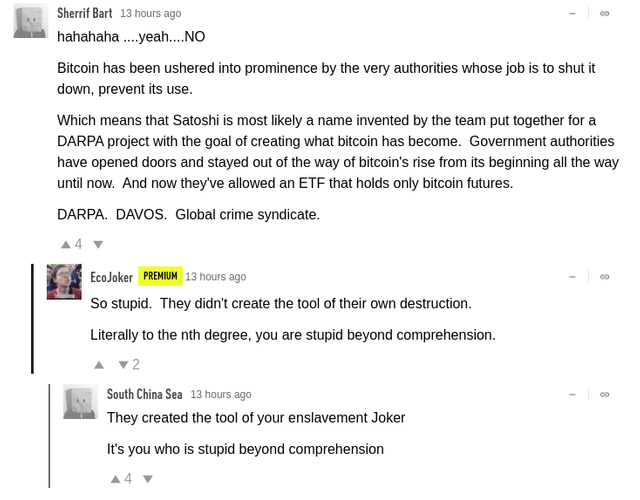 This honestly is the criticism that gives me the most pause. It is possible that Bitcoin was created by the deep state, and there is some evidence to suggest it played a hand in at least the conceptual realization of these technologies. How this will play out in the end, I do not know. Will trackable digital currencies like bitcoin lead to outcomes that favor insiders and deep state plans? I don't know that either.

Take some time to read through the concerns about Bitcoin, which ones seem valid to you? I would love to read your response in the comments.

Let's take some time to retest our education level about these technologies, and there is no better way than staring face-first into the criticisms. And if you are ever bored - find a Zerohedge crypto article and load up the comments section - enjoy!