Monster Workers in the Land Expansion: Will The Demand For Splinterlands Cards Grow?

In the upcoming land expansion of Splinterlands, players will be able to create Spells and Items, that can be used in the game, for example in tournaments and ranked matches. However, the outcome of crafting them will be random and based on various factors, one of them being your monster or summoner cards working in the building on your land plot.

Unlike some crafting mechanics in existing games, in Splinterlands it will not be possible to choose exactly which Item or Spell you wish to mint. Instead, the resulting Item or Spell will be randomly determined based on a number of factors, including, but not limited to, the level of the building, the Monster & Summoner cards working in the building, the types of Essences used, and bonuses from special Totem artifacts placed in the building (more about the Totems below).

Obviously, we want to create the best chance for crafting the most valuable spells and items possible. One factor will be the monster workers we place on the lands building. To determine which monsters will probably do best at that, let us first look at what we know already about the game mechanics of the land expansion.

Each plot of land will have a terrain type, a category, and a rarity.

The terrain type indicates what sort of land it is, what types of resources it can have, and what types of Splinter magic are best suited to that land. There are planned to be fourteen different terrain types in total: Plains, Hills, Tundra, Swamp, Bog, Mountain, Canyon, Caldera, River, Lake, Forest, Jungle, Desert, and Badlands.

With seven splinters (including Neutral) and the mission to give all cards an additional purpose and hence value, we can probably assume that the 14 regions favor monster workers from all of the seven splinters (maybe two terrain types per splinter). There are eleven different resources known so far, assuming that Occupied land plots will feature only one single monster essence. If there are essences for each of the six independent splinters, as it is the case with Magical land plots, we would have sixteen different resources. And each could come in the four rarities common, rare, epic and legendary.

Most buildings will also require some existing Monster and Summoner cards to "work" in them in order to function, so you may want to hold off on burning your hordes of Rusty Androids! Additionally, Monsters and Summoners from certain Splinters will be better suited to working on specific types of buildings and land plots. For example, Fire Splinter Monsters and Summoners will perform better on a Mountainous land plot than on a Lake.

So we know that most buildings, that can be build on a land plot, will require a worker from your monster cards and that its edition, level, foil and rarity will probably play a role for its bonus to the land plot. Maybe this will be calculated via the cards collection power, that includes edition, BXC and foil (which all defines a cards burn value for DEC). If so, Promo cards would have the same status as Alpha cards and Beta Reward cards would have the same status as Beta cards. 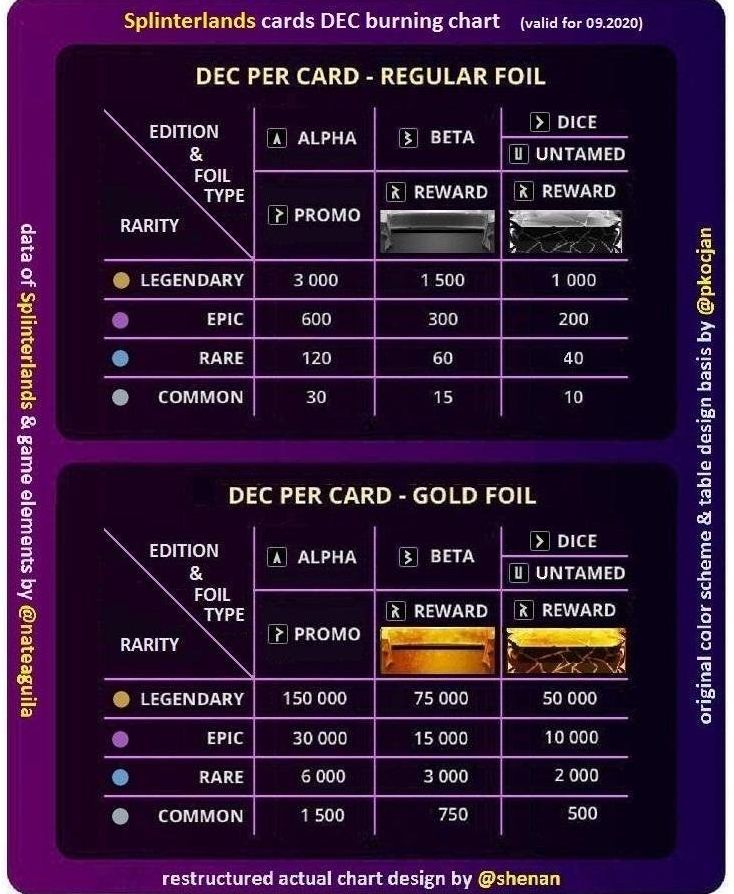 This means there will likely be a much higher demand for cards in general, favorably high level gold foils from older editions.

This is all pure speculation based on probable game mechanics that would make sense with the currently known information.

Several questions come to mind, that will influence what workers will be the best-in-slot:

We still don't know enough yet, to decide definitely what cards will be the best to serve as workers on our land plots. However, from what has been said on the Splinterlands AMA's before, we can assume that Alpha cards but also Beta and probably Promo cards as well, will give better bonuses than Untamed, Dice and current Reward cards. A max level card will probably get a better bonus than a low level card and a gold foil will give a better bonus than its regular counterpart on the same level. Plus, we will need workers from each splinter (probably even Neutral) to get the best bonus for each terrain type land plot. And then we will need multiple of each kind for each of the various buildings we can build on top of the land plots.

If this is all true, than that would create a lot of demand for monsters cards. Apparently, the market is already reacting, when we look at Rusty Android.