My Thoughts on the LeoFinance Decrypt Article

In case you missed it, LeoFinance was featured in a Decrypt article following the wLEO hack fiasco: Ethereum Project WLEO Hacked for $42,000 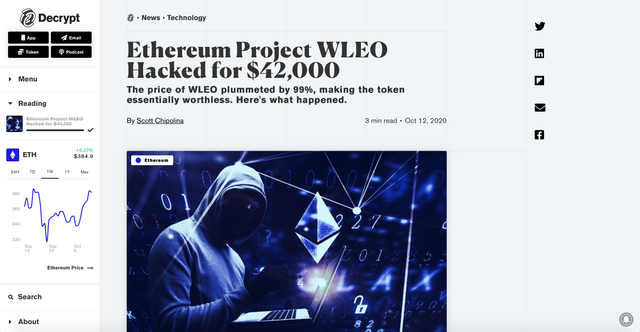 They do say that any publicity is good publicity, don't they?

I'm definitely embracing the mainstream media attention no matter the circumstances and hope that the team is at least using this as an opportunity to build a few contacts in the crypto journalism space.

Here are a few of my thoughts and comments on the article below.

The price of WLEO plummeted by 99%, making the token essentially worthless. Here's what happened.

While it annoys me a little that in the eyes of the outside world, the entire LeoFinance project is limited to just an Ethereum project, this also shows why it's so important that we get wLEO on Ethereum right and escape our own Hive echo chamber.

Yes LeoFinance is so much more than just wLEO, but to get the project in front of more eyes, we need the wLEO gateway.

The WLEO contract was hacked late yesterday, resulting in $42,000 worth of stolen funds. The hacker stole Ethereum (ETH) from decentralized exchange Uniswap’s pool by minting WLEO to himself, and swapping it for Ethereum.

“From what I keep hearing, this has happened to many other pools on Uniswap. The token issuing contract/address gets exposed and then someone takes advantage of it to mint infinite tokens and rug pull the Uniswap pool to steal the Ethereum,” said Khaleel Kazi, founder of the LEO Finance community, in a report about the hack.

Also, how good is it that they gave us a backlink to the leofinance.io domain! 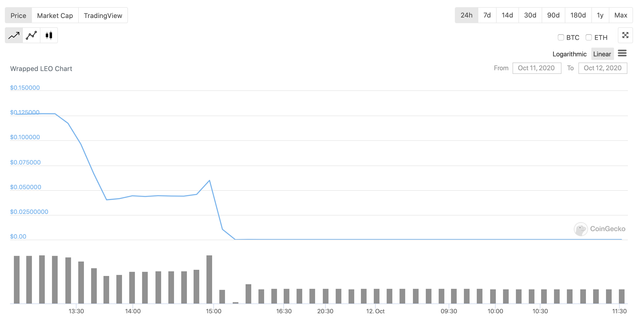 Damn, there goes our pretty charting platforms outside of the LeoDex.

I do hope when wLEO version 2.0 is launched, all of these charting integrations will pop straight back up along with it.

WLEO is a wrapped version of the LEO token, which runs on the Hive blockchain. The price of WLEO is pegged to the LEO token, but as it runs on the Ethereum blockchain, it can be used in smart contracts, and has access to the wider Ethereum ecosystem. The price of LEO suffered a drop of approximately 60% as a result of the hack—but has since rebounded to its current price of $0.146.

Nice little mention for Hive there.

While there's no mention of the LeoFinance project as a whole, it's definitely a great mainstream introduction to who we are.

I see some negativity about community projects like LeoFinance looking outside of Hive, but for me this once again shows how important the outward facing nature of communities are to Hive overall.

Each community's base token will always have a home on Hive because of how amazing the blockchain is, but the fact they're venturing outside to bring in new eyeballs, will be hugely beneficial to Hive itself in the long run.

Since then, the hacker, whose address is known, has reportedly transferred the Ethereum to Binance using anonymous accounts, making it almost impossible to trace the stolen funds.

“Binance has been contacted but there may be nothing they can do since the hacker seems to have used non-kyc'd accounts to receive the ETH,” added Kazi.
It remains unclear how the hacker managed to pull off the theft. According to Kazi, the flaw exploited doesn’t appear to be from the WLEO oracle, which allows the blockchain to interact with real world or off-chain data.

“This narrows it down to just a few possibilities for how they exposed the wLEO contract. We'll release more details as we continue to investigate and narrow it down further,” said Kazi.

Of course the hack is going to be facilitated by Binance.

I hope this possibly could be used to ask for a goodwill gesture of a Binance listing once wLEO 2.0 is relaunched.

Something to think about using for the team.

One person even suggested they would pay their rent with LEO. At current prices, that’s looking unlikely.

Of all the content within the community to be linked out, they picked @empoderat's fun rent comment.

We live in a headline driven news cycle that requires digestible soundbites just like that one.

I'm firmly in the camp of any publicity is good publicity and am embracing the insight of how we're viewed by those outside the Hive bubble.