I hope you're either enjoying your Sunday, or depending on where you are in the world, at least about to enjoy it.

With Quello down for maintenance, I'm unable to do my little Sunday routine of answering questions and trying to build some leofinance.io links and SEO presence while I'm at it.

As a result, I wanted to share a Silver chart which after pulling back, has respected a daily support/resistance zone which we're going to need on our charts for the upcoming week. 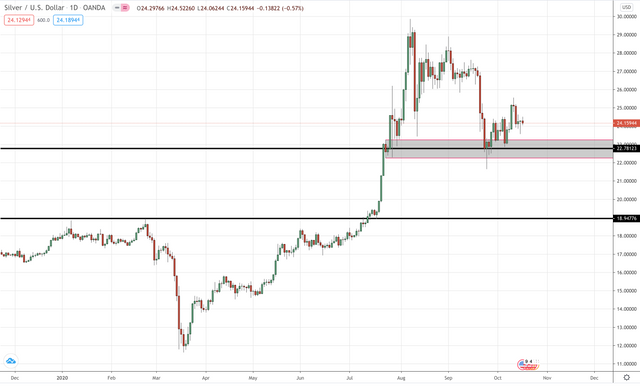 This one is fairly straight forward and doesn't need too much more of an explanation rather than it's the first zone that acted as resistance following the last breakout higher.

Keep this one on your charts because we're no doubt going to be using it to day trade around going forward.

As I've mentioned before, after getting a new laptop, I haven't been able to work out how to install MT4.

As you can imagine, having to switch between my old laptop for charts and trading, while using the new one for my writing has been a HUGE pain the ass.

Then there are days like today where I'm not at my desk and certainly not carrying around 2 computers when forex markets are closed, just to chart.

It's coming to a head and I've gotta sort out my shit.