PayPal Cashing In On Crypto | Buying Crypto Firms? | "launching its own digital currency..."? 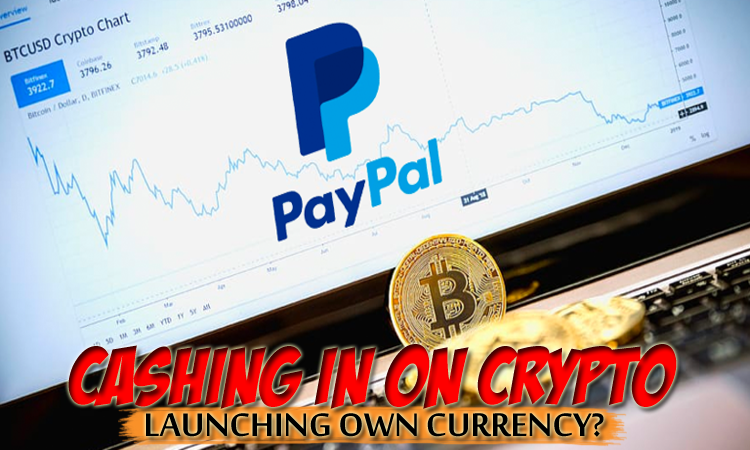 PayPal customers will from early 2021 be able to use cryptocurrencies to shop at the 26 million merchants on its network. The company will also allow people to buy, sell and hold Bitcoin and other virtual coins using its online wallets.

The initial focus will be on Bitcoin, Ethereum, Bitcoin Cash and Litecoin. The service will be available to PayPal account holders in the US in the coming weeks. Plans are afoot to expand this to Venmo and select international markets in the first half of 2021.

"The shift to digital forms of currencies is inevitable, bringing with it clear advantages in terms of financial inclusion and access; efficiency, speed and resilience of the payments system; and the ability for governments to disburse funds to citizens quickly."

"Our global reach, digital payments expertise, two-sided network, and rigourous security and compliance controls provide us with the opportunity, and the responsibility, to help facilitate the understanding, redemption and interoperability of these new instruments of exchange."

"We are eager to work with central banks and regulators around the world to offer our support, and to meaningfully contribute to shaping the role that digital currencies will play in the future of global finance and commerce."

According to Meltem Demirors, CSO at digital asset management firm CoinShares, PayPal could move into issuing its own cryptocurrency after officially entering the crypto industry earlier this week.

In an interview with CNBC’s Fast Money, Demirors said:

“I wouldn’t be surprised if, in the next six to 12 months, we see PayPal launching its own digital currency similar to a digital dollar that we see in many payments companies, in the Asia Pacific region in particular.”

She also added that PayPal last year officially left the Libra Association, the governing body of Facebook’s Libra digital currency project, claiming it wanted “to continue to focus on advancing our existing mission and business priorities as we strive to democratise access to financial services for underserved populations.”

$PYPL is cashing out on crypto. Coinshares' @Melt_Dem says this is how the move could impact Bitcoin and future of fintech. $BTC pic.twitter.com/0Zbm9TgoMF

PayPal in Talks to Buy Crypto Firms Including BitGo..

Do You Think We Will See PayPal-Coin?