A new plan is forming.

With some of the recent developments announced, and coming soon to Comdex, I have a new plan forming up that I'd like to share. Basically, I'm looking to get community feedback to poke holes in it. 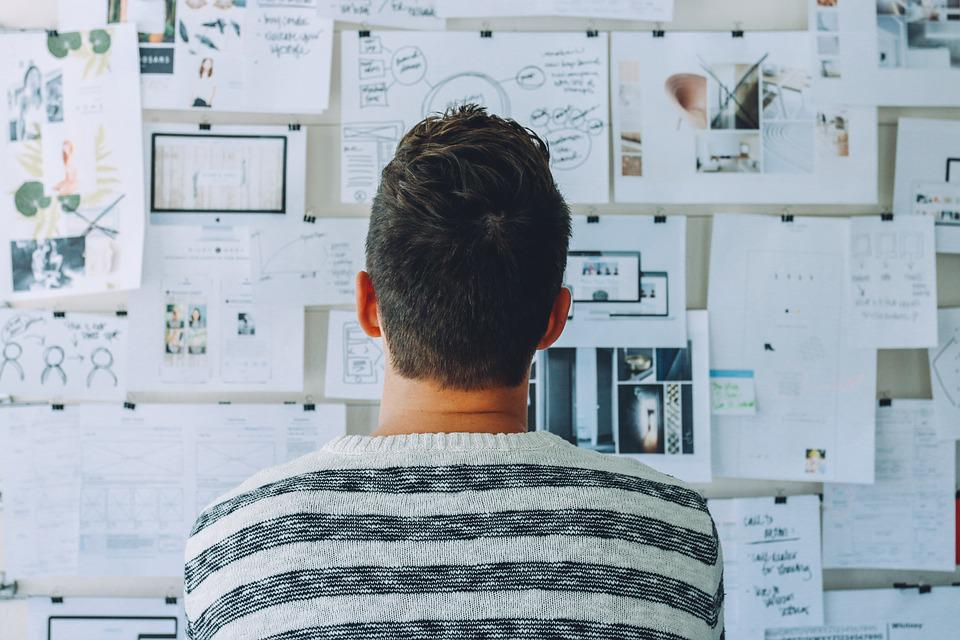 Here is how it goes.

The first part of this plan is something I already have well under way. Basically, build a solid sized stake of the CMDX token. This pays out staking rewards, currently at an APR around 45%. Staked CMDX takes 21 days to unstake. I already have this first part of the plan underway, and am more than half way to my short term target. CMDX under $0.20 is a bargain, in my opinion. Market cap is tiny, and even fully diluted valuation is only $40 million. If the team delivers on its plans, then I think this could be an amazing price to accumulate CMDX at, with a 1 - 3 year time horizon.

Of course, this is not financial advice - DYOR.

So once the CMST stable coin gets launched, It will be possible to deposit CMDX into a vault as the collateral to borrow some CMST. In my plan here, each day I will claim my staking rewards, and add them to my collateral vault. So, depending on price movements, I should be able to borrow some more CMST each day. So, this will give me a small, but growing daily amount of CMST I can borrow from the vault. I'd probably maintain a fairly overcollateralized position here, at least 200% and possibly higher, to minimize the risk of liquidation.

The thing I don't know at this point of the plan is what the costs associated with borrowing (minting) CMST will be. This would obviously affect the outcome of this plan significantly.

So the key risk here is liquidation. My thinking is that having a daily flow of funds to top up the collateral, and maintaining a well overcollateralized debt position should minimize this risk.

To learn more about Comdex's upcoming stablecoin, check out this post I made a few weeks ago.

At this point of the plan, I would take the CMST I just minted in step 2 to the Commodo platform also running on Comdex, and deposit it onto that platform. This is in effect lending my CMST to the protocol, which it can then lend out to other users. Just like a DeFi bank, and working along the lines of many other crypto lending and borrowing platforms. The CMST deposited here should generate some yield, in CMDX.

@carbonzerozone recently put out a great post outlining how the Commodo platform will work. I'd highly recommend it to learn more about this addition to Comdex.

The main risk at this point would be the platform risk - some type of lost or stolen funds exploit. Another risk will be if the CMST deposits are locked for a time period. A De-pegging event would be a risk. Less critical risks would be that the yield becomes quite small, making this process not worth the effort.

So, after Step 3, I know have CMDX income from two sources, staking rewards and the yield from depositing the CMST into a vault on Commodo. This will obviously start out small, but grow as I add more CMST daily. So then, the plan is to simply add this new income flow to the staking rewards utilized in step 2. Each day this will all grow a little bit more, and by compounding this process every day, a growing asset base can be achieved.

In this overall plan, the assets I would have would be:

The Debt would be simply the CMST borrowed from the CMDX vault position. 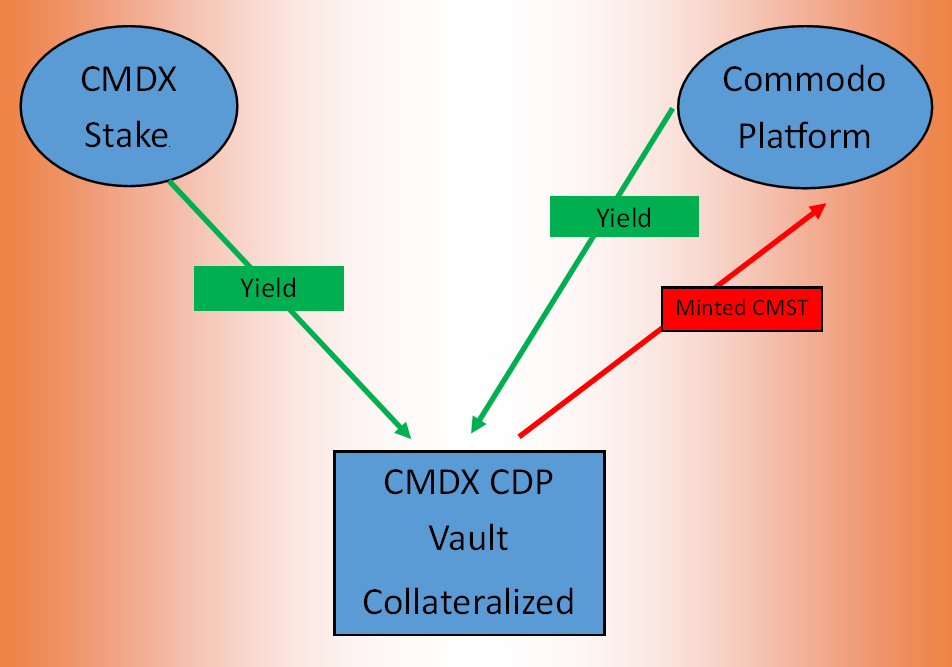 A basic infographic I made to try explain my plan. Don't judge me, I have never made an infographic before.

Can you see any holes in this plan? Risks I have not considered?

Let me know in the comments below.

Leofinance now has a great new home for Comdex related content. Join Leofinance for free, and come chat with other Comdex community members, on a Web 3 social media platform, where your content is stored immutably on the Hive blockchain, and you own your data.

You can find the Comdex community page at this link.

If you would like to learn more about Leofinance, and the benefits of joining this community, this post covers it all.

21 days to unstake... It reminds me of ATOM. I don't like such long unstaking periods, but on the other hand, you probably won't find a reliable staking option with such a high yield any time soon.

Most coins in the broader Cosmos eco-system are 21 days. A few (like OSMO) opted for 14, while others (JUNO) are 28 days.

The yield has not been great so far, with a big decline in the price, but with a strong pipeline of projects, and a focus on value accrual along the way as well as a nice max supply, I think CMDX has seen its ATL.

Sorry for the question, but it is something I still don't understand, is this token created in the Hive blockchain or in some other?

No, completely unrelated to Hive.

Tt runs on its own blockchain (Comdex) and is one of many chains in the Cosmos eco-system (the internet of blockchains).

Nothing to do with Hive, but I am trying to promote Leofinance as a great place to share content about Comdex to try onboard some more people.

I am interested, and more because it is built on the blockchain with a lot of utility, I will investigate more :D

Can you see any holes in this plan? Risks I have not considered?

How can we sure that it cannot dip more. Good for probable risk. But risky for stable income.

Yeah, dipping more is the obvious risk - and one I didn't mention. My plan is to hold on tight to my CMDX tokens for a few years, and all the other assets I can accumulate with strategies like the above will come from staking rewards. I have no fresh capital to add/put at risk.

Always working on plans to get ahead. One of them will work one day.

Surely, they would one at a time.

I think you laid out the risk pretty well. This is a safe play to earn passive income without losing your principle. The risk is all on COMDEX and the projects involved in your income loop. If they are solid, your plan is solid. Of course, there is a lot that can go wrong... but this is crypto, those that are battle weathered know all of that already.

Always plenty that can go wrong, and if it does, well that's the risk. Principle (my CMDX stake) would remain intact no matter what, so the main risk is either something doesn't work and the other components get rekt (they are all built from income, so main lose would be opportunity cost), or CMDX keeps going down massively, or the team behind it stop/rug/quit etc. With a doxxed team, I rate that risk fairly low.

Regulatory risk is present, but it exists across much of crypto anyway.

Love it. Solid gameplan. $CMDX is poised for a HUGE upturn, it's so insanely undervalued rn it's ridiculous.

dYdX coming to the Cosmos is going to create a resurgence no one expected during these extremely bearish times, mark my words!

Picking up CMDX under 20c lately has seemed like the buy of a lifetime.

The dydx news is cool, working on a post right now, but have to dig into some research a bit to get my head around what they are. Certainly brought some attention to Cosmos, and a nice little pop up in price.

Got to learn this one.
It sounds like MakerDAO.

Glad you bring the vision to learn and see there are more to crypto.
What exchanges can be used for this token ?

Yeah, the stablecoin they are launching is modeled on MakerDAO and DAI. Overcollateralized stable for the Cosmos eco-system.

Plus a lending platform, Dex, synthetic commodities platform and more in the pipeline.

One of the most undervalued projects around, in my opinion.

As for exchanges, its only on Cosmos Dex's currently. Osmosis, Junoswap and I think maybe Sifchain, although I have not checked there. No Cex's. But it is easy to buy ATOM anywhere, and then trade it to CMDX on Osmosis.