Bitcoin Adoption, It has Begun! 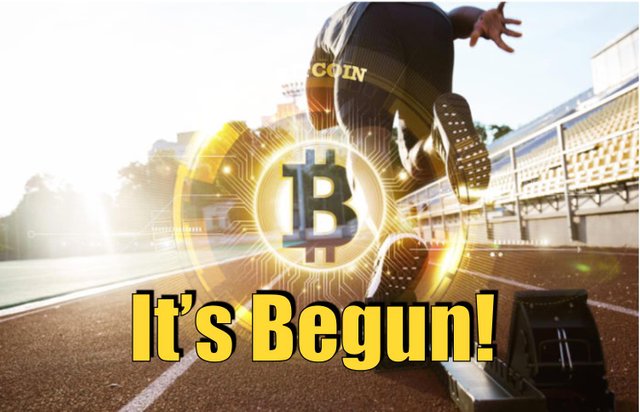 It has begun. Have you been able to see it, or hear it? There is a new feeling in the bitcoin market during the last month, and even more so with today's news. In the cryptocurrency world we have all been wondering when mainstream adoption would finally take place, but we haven't been asking when corporate adoption would take place. And the latter has just began, and this could change everything.

Let's talk about it!

People and analysts have been speculating since bitcoin's last all-time high what would send bitcoin to even higher marks in the future. Would it be the recent bitcoin halving? Could the DeFi and Ethereum hype start it off? The recent Covid situation with free money being printed? Or would it be when mainstream adoption finally happens with an influx of new users?

While I think each of those answers definitely help contribute to that end goal, in the end the real goal was always to have more users come in that would push the price up. But now it is very possible we don't even need mainstream adoption for the next bitcoin bull market to occur. That's because it appears that corporate adoption has just begun.

In August, MicroStrategy, the Nasdaq-listed business intelligence company, became the first publicly-traded company to buy bitcoin as part of its capital allocation strategy. The company announced it purchased 21,454 bitcoins MicroStrategy first revealed its plan to buy bitcoin as a way to avoid inflation on July 28.

But MicroStrategy wasn't finished yet; they wanted more. 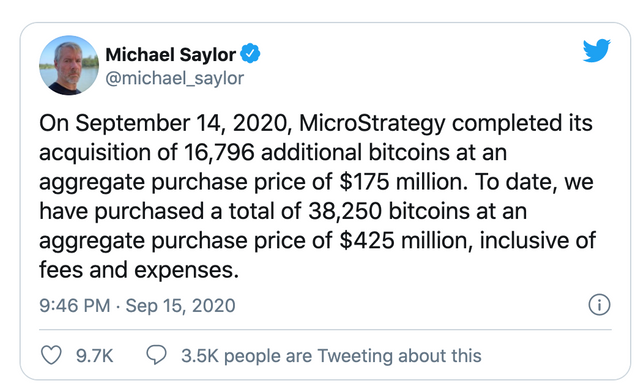 This news alone was incredibly bullish for many reasons. Often times in the business world, there are many companies who may all want to do the same thing, or enter a new market. But, because the fact that no company has done it before make the move look much risker and less appealing for companies. But now that MicroStategy was the first company to actually take the plunge and invest in bitcoin many analysts believed it was only a matter of time until the next large company to buy bitcoin comes along.

And that next company has in-fact come along. Square; purchasing 4,709 BTC, about $50 million.

Let me tell you why this is even more important.

First and foremost Square is a more well-known company than MicroStrategy. Thus making their purchase have much more weight in the business world. Their CEO, Jack Dorsey, is also the CEO and Founder of Twitter as well.

But the important thing is that Square/Dorsey shared exactly how they made their purchase, and how another company can do it as well. Believe it or not, many people still don't know how bitcoin works. Then add in the fact how many regulations there are in the business world and it can really complicate things; especially for publicly traded companies.

The pillars of the traditional business world are beginning to come down. These companies are looking into the future and seeing that holding cash is going to become an act that will lose money. All you need to do is to look at the cash reserves of the largest companies in the world just to see how much potential cash could come into bitcoin if only a percentage of that finds its way to bitcoin.

Like I said before, Microstrategy opened the door for businesses to enter the market, but now Square has pulled that wall down completely. As the price of bitcoin goes up, other companies will rush to purchase their bitcoin before it is too late.

We have all read and listened to the very bullish future price predictions for bitcoin in the years to come. Podcaster/Investor Anthony Pompliano predicts $100,000 by the end of 2021. The infamous PlanB predicts $288,000 in the same time frame in his stock to flow chart. Investor/Real Vision Raul Pal predicts $1,000,000 by 2025.

These prices could be life-changing for anyone who holds bitcoin at this current moment. But for this to happen we need a large influx of money to come into bitcoin.

And corporate adoption is how this will happen.

What do you think? Will other companies buy bitcoin as well? And will bitcoin ever reach those high price predictions!?