The price may not be at all time highs yet, but other metrics certainly are

It has taken bitcoin some time to get going these last few months.

Bitcoin was met with heavy resistance around the $12k area and hasn't been able to do much in the terms of positive momentum since then.

That is, until these last couple days when we saw the price of bitcoin go from the mid $10k's to the mid $11k's in a relatively short period of time.

Even with that move, however, bitcoin is still more than 40% below it's all time high set back in late 2017.

Gold, silver, and the US stock market are all significantly closer to their all time highs currently.

That being said, there are a handful of underlying fundamentals that are at or near all time highs for bitcoin... 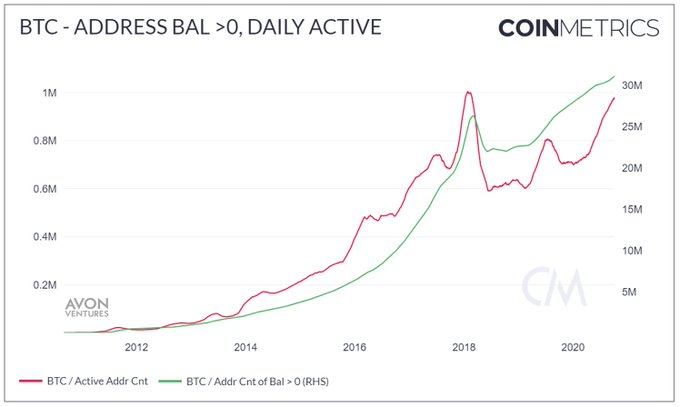 And you know what they say...

This is also on the even of potentially another very large stimulus deal being passed in the United States.

Which means the market is starting to price in more stimulus at some point in the future.

So, we have improving fundamentals as well as a flood of new money potentially pouring in within the coming months, add it all up and it makes for an ideal investing environment in my opinion.