Bitcoin tends to turn even the staunchest of doubters into believers...

First they dismiss bitcoin, then a few years later their company is investing $425 million into it

Do you recall what your first reaction towards bitcoin was when you first heard about it?

If you are like most people, you probably doubted it had any staying power, called it a scam, or dismissed it all together as a beanie baby fad.

Rewind the clock to 2011, back when I was trading leveraged ETFs for a prop firm...

I had CNBC on basically at all times of the day, but especially during market hours.

I remember hearing them briefly mention this thing called bitcoin from time to time and how it had made incredible gains.

I immediately thought it was the equivalent of a scam and couldn't believe people were dumb enough to be putting their hard earned cash into this thing.

Sure enough a few months later it crashed, it crashed hard.

I felt vindicated and didn't put too much more thought into bitcoin for a while.

Then a few years later in 2014 I started hearing about it again, as it was making incredible gains yet again, much higher than the previous highs.

Upon seeing this it pretty much changed everything I thought about bitcoin.

If it could go up and crash like it did, and then survive and eventually go another even bigger run, I figured the must actually be something to this thing.

It wouldn't be until early 2016 until I actually invested some money into it, but that is more or less how my disbelief turned into believer over the course of a few boom and bust cycles.

It turns out, I'm not the only one with a story like that...

If you read my post from yesterday you may recall that a company recently put a very large amount of their capital reserves into bitcoin.

More on that can be seen here btw:

The really interesting thing is that the person running said company was actually not a very big fan of bitcoin just a short while ago.

In fact, right about the time I was starting to become a bitcoin believer, he was still bashing it... 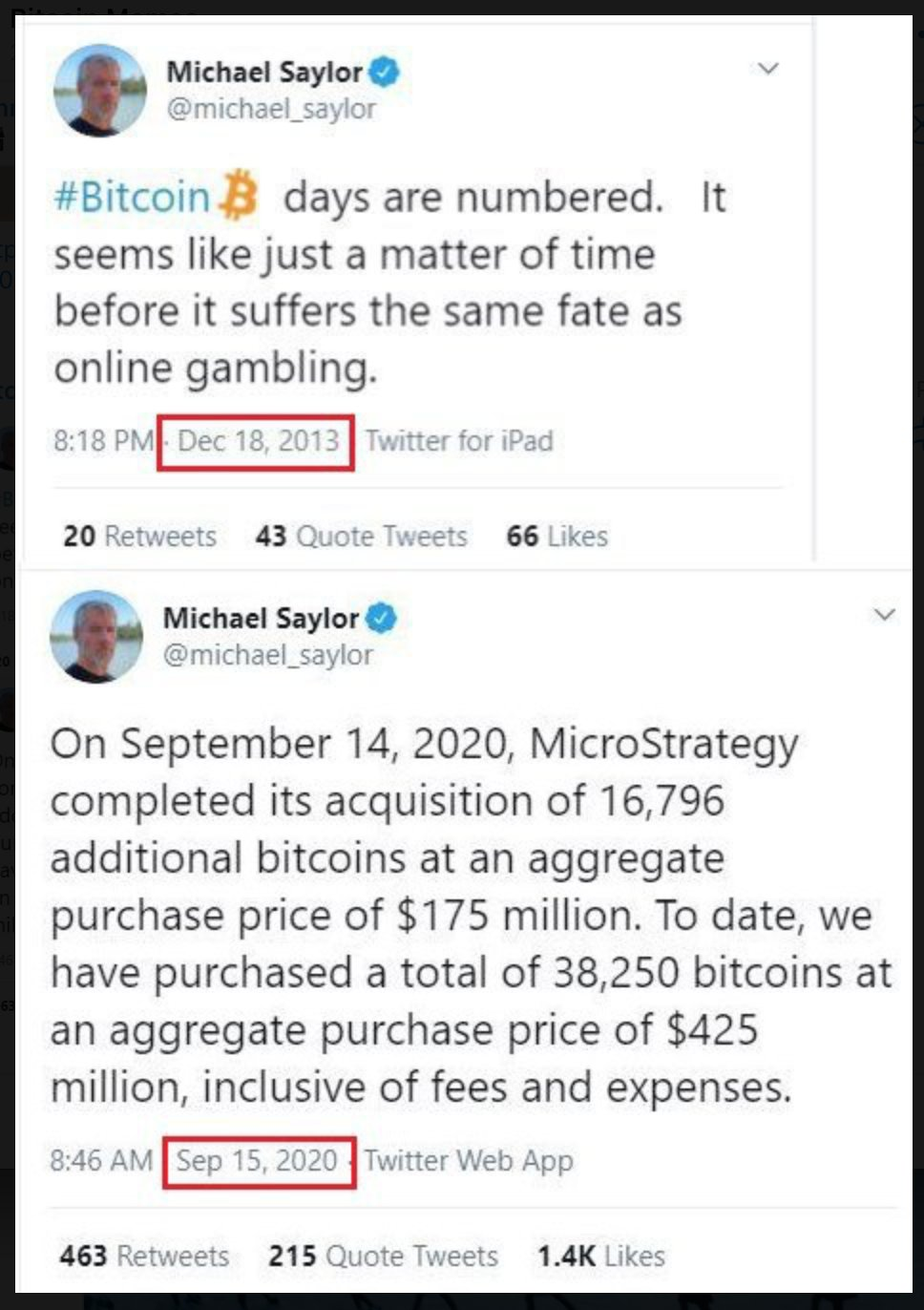 Notice the dates on each of those tweets...

From thinking its days are numbered to putting $425 million of your companies assets into it in roughly 6 years time, now that's quite a change of heart!

I don't know that I have seen a bigger turnaround story than that.

This is a true Saul being turned into Paul type of story!

The big news of the day is that Microstrategy did indeed add to their bitcoin holdings, taking them from $250 million to $425 million but the irony in all this can't be lost.

The CEO is not only taking a big leap for all fortune 500 companies, but he's doing so from the standpoint of fully expecting it to fail just a few years back.