So how did Microstrategy get $425 million into BTC without moving the price?

Microstrategy reveals how they were able to get $425 million into BTC over the last several weeks without moving the price...

If you ave looked at the order books on most crypto exchanges, you will notice that it doesn't take THAT much money to move the price.

Of course I am talking in relative terms here as it would take tens of millions of dollars to move the price which is more than many of us has to tinker around with.

That being said, when a big company like Microstrategy decides to invest $425 million into bitcoin, there is a very strong chance that they will impact the markets.

However, if you look back over the last couple weeks you will notice the price of bitcoin has actually been relatively calm, outside of one large drop.

The CEO of Microstrategy went to Twitter today to let the world know how they were able to get that much money into BTC without causing a large price swing.

Here's how he did it:

While describing how he did it, it's still not entirely clear what he means by that.

For some added clarity, our good friend PlanB chimed in as well. 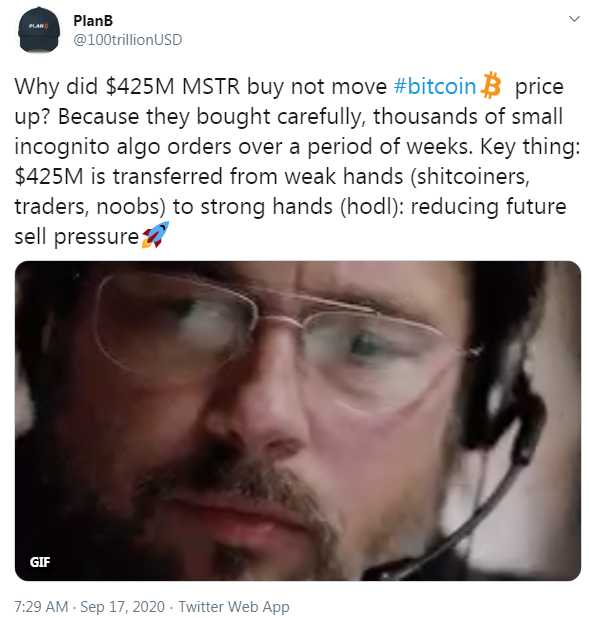 Basically it sounds like they used some sort trading system to slowly accumulate BTC over time.

I am sure the crash a few weeks back helped them accumulate a larger amount rather quickly.

The overall takeaway is big though, and exactly what PlanB was alluding to.

Regardless of exactly how they accumulated them the important thing is that they bought them from weak hands and are likely to be a very strong hand going forward.

This likely removes future selling pressure which ultimately will help bitcoin go even higher than it otherwise could have had they not gotten involved.