The Microstrategy news just gave Bitcoin even more staying power than it had before...

A few years from now when bitcoin is trading for north of $100k, you can look back and thank Microstrategy.

When bitcoin is an option for your IRA and other retirement accounts, you can thank Microstrategy.

When your employer offers you the ability to take part of your income in bitcoin, you can thank Microstrategy.

When you can buy your cup of coffee using bitcoin, you can thank Microstrategy.

Ok ok, that last one was probably a little extreme and not likely to have much to do with Microstrategy, but you get the point.

Microstrategy has literally changed the game and greatly sped up the adoption cycle of bitcoin and crypto.

If you have been following along with any of my recent posts, you likely have come to the conclusion that I think the news of Microstrategy investing $425 million into bitcoin is likely some of the biggest news of the year.

In case you haven't been following a long, here's some reading material for you:

Yes, that is a lot of reading material and I promise this will likely be my last post on the subject, well until Microstrategy buys more bitcoin. :)

But anyways, like I mentioned in the first post above, this is likely to be a watershed moment for bitcoin and crypto.

Here we have a $1.7 billion dollar company putting $425 million into bitcoin, and at the time the company was worth closer to $1 billion or so.

Given that kind of stock price appreciation, what are the odds that Google, Microsoft, Apple, Facebook, etc etc etc all don't start demanding that they put at least some of their cash into bitcoin?

Especially given the fact that these companies are sitting on hundreds of billions in cash.

In fact, those questions are already being asked: 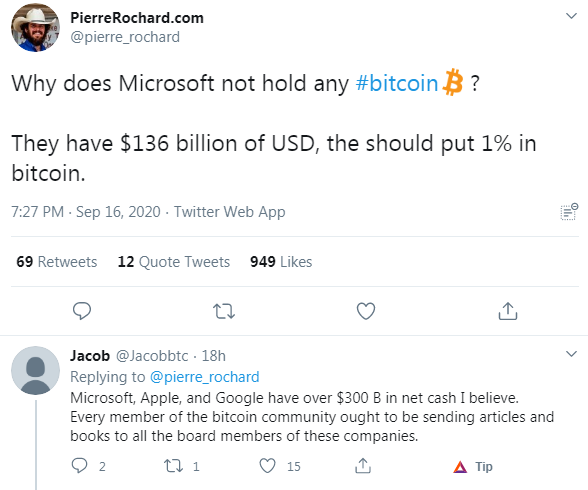 Once it becomes apparent that the easist way to juice your stock price is just pick up some bitcoin, all these big tech companies are going to be doing it.

And don't forget about Twitter and Square, who are also sitting on billions in cash, it's likely a guarantee that they eventually move it to bitcoin given Dorsey's fondness for the cryptocurrency.

I suspect that within the next 12 months we are likely to see an arms race of sorts as tech company after tech company starts picking up BTC not to be left behind.

Another big development from this...

As I mentioned above, roughly a third of Microstrategy's valuation is tied to their bitcoin holdings.

And it's market cap is likely to ebb and flow with the price of bitcoin from here on in, which in effect makes it like a bitcoin holding company.

Which is very interesting in a day and age where there are no legally approved bitcoin ETFs in the United States.

MSTR pretty much just become one.

But that is the just the side point to my real point...

The biggest risk to bitcoin is an existential risk, from major governments around the world, at least in my opinion and many others... 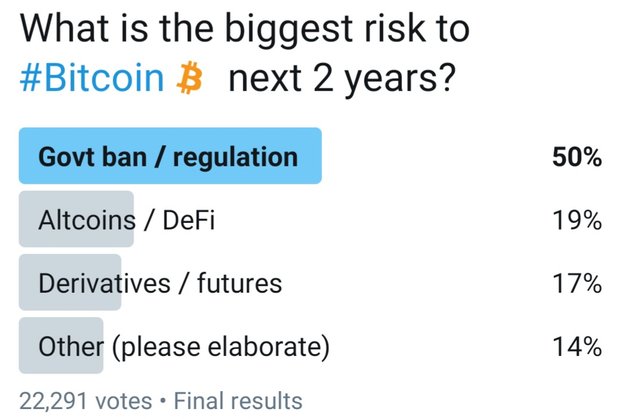 If they coordinated together and decided to ban bitcoin all at once it could be a very big deal for the price of bitcoin and it's future. It can't technically be killed, but it could be pushed so far underground that for all practical purposes, it has been killed.

However, how many corporations have to put it on their balance sheet before the possibility of Congress banning it drops to zero?

Whatever the number is, the more large tech companies that start to hold bitcoin as a reserve asset, the lower the odds of it ever being banned.

So, not only is this big news for the price of bitcoin and its likely future HODLers, but this is also huge news in that bitcoin also just got a lot less likely to be banned.

It's the biggest news of the year folks and I'm looking forward to seeing the next major company follow to in their footsteps!