You can now use Metamask to sign in to LeoFinance.io!

I went to login to LeoFinance the other day and noticed something new for the first time.

It had the usual Keychain and Hivesigner options, but it also had something I hadn't seen before.

This may be old news to some of you out there as this has been talked about for a couple days now, but this is the first time I am seeing it on my login menu.

I am guessing this might also play some sort of role in what LeoFinance has coming down the pipeline...

They announced on their Twitter that they were announcing that they had an announcement coming. 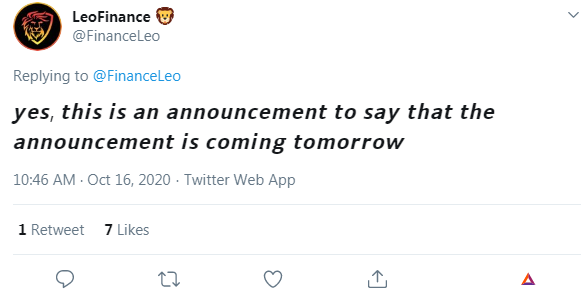 I am not sure exactly what that announcement will be but the ability to connect with Metamask is YUGE!

Metamask is well on its way to becoming the most popular and widely used crypto wallet in the world.

There was just an announcement the other week that they had cracked the 1 million user number.

(On a side note, it goes to show how small this industry still is when 1 million users makes you one of the most popular of anything in the world)

With people able to sign for LeoFinance via Metamask and collect rewards in Ethereum, it could really take LEO to another level.

Not many people out there want to spend their time earning some unheard of altcoin that's not listed on any exchanges, but if you tell them that coin can directly be swapped for ETH, so in effect, they are able to earn ETH for their time...

Well that makes all the difference!

After a major speed bump in the road last week, LEO looks like it is ready to rock and roll and keep moving forward.

The sky is truly the limit at this point, just have to get the word out about it.