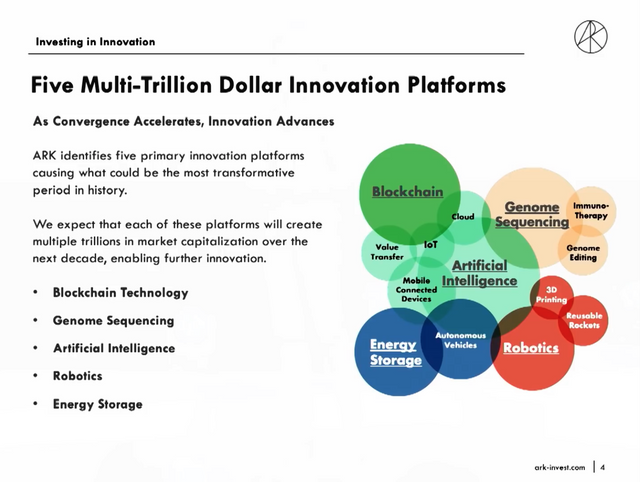 Cathie Woods is the Founder & CEO of Ark Invest and is a well-known advocate of investing in disruptive technologies that she believes will have a massive impact on the future of civilization. She’s known for being a Tesla Bull, a Bitcoin advocate and much more.

I’ve listened to a few of her talks/podcast episodes and I enjoy her commentary on the tech investing landscape. She’s clearly bullish about bleeding edge technologies and she often throws out some pretty awe-striking numbers about the potential of these investments, but she also backs everything she says by data and research .

Data and research alone won’t make the whole cake, but they are essential ingredients to the finished product. In this talk she gave at a summit in South Africa, she talked extensively about the five multi-trillion dollar platforms of innovation that she and Ark Invest are focused on moving forward.

The Story is Already Written 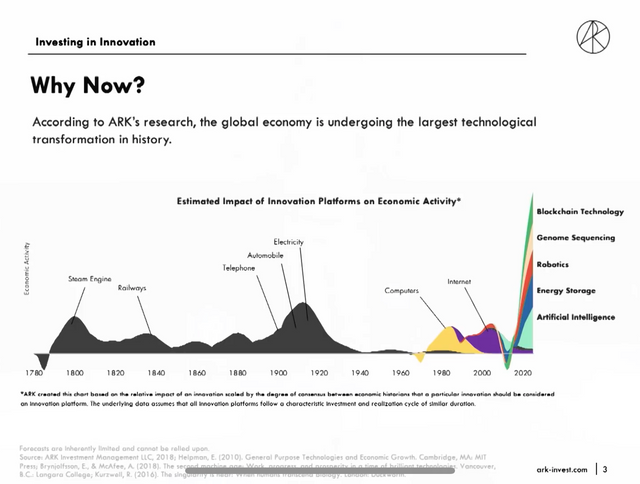 The impact of these technologies cannot go understated. Blockchain Technology, Genome Sequencing, Robotics, Energy Storage and AI are going to be at center stage for the future of humanity in the coming 5-50 years. Some of these technologies are far off from every day use while others have embedded early versions of the tech into our every day lives without us even realizing it.

Use AI as an example.. Most people have no idea that when they browse Facebook or Youtube and see “recommended” articles and various “algorithm-based” display choices, they are actually interacting with content fed to them by AI.

Artificial Intelligence is a spectrum. A lot of people think that AI is 100+ years away… but they don’t realize that AI is already among us. Just in a lesser form than the “Terminator” image that they have conjured up.

In fact, if you hear some scientists who are actually informed about the current state of AI talking about the technology as it works today, many believe that it has far more power than you could imagine. You’ve heard all the stories about how “Russian bots & hackers” rigged the U.S. election, right?

AI and social media algorithms are one and the same. Social Media is driving culture at an exponential pace and the conversations can (and already are) being manipulated by AI.

If you’d like to see an experiment in social media aglorithms, try this:

It’s a small-scale experiment, but it works. You can see how AI can manipulate your “digital world” by simply encouraging you to view certain content. Now imagine how that looks 5-10 years from now as that AI technology continues to get smarter and smarter and smarter. Exponentially smarter.

Scary stuff. Or cool.. depends on how you view it and also how it is used (controlled) by giant corporations.

AI isn’t the only technology that has creeped into the mainstream without people realizing it. Blockchain is already being integrated on a major scale and most people have no clue what it even is.

In my opinion, we are still relatively far off from “mainstream” adoption. I’ll define mainstream as being everyday use by everyday people. When you go to the coffee shop and buy a cup of coffee using crypto or when you go to the hospital and your medical records are synced into a database that all hospitals can access.

The use cases for blockchain are still so new and so early. We are far from that level of “mainstream” adoption, but we are already expeirencing a major shiftt in the way people are transferring value on a global scale.

The key here is “global scale” — many of the people that I talk to locally (In the U.S.) have heard of Bitcoin, but don’t really care for it. They don’t need it. Why would they use some “digital currency” that isn’t backed nor secured by any regulatory body?

In the States, we can rely on USD. Yes, there is a high inflation rate, but our issues are nothing compared to the issues people are facing in places like Venezuela. For this reason (and several others), we are seeing a massive amount of transaction volume flowing through networks like the Bitcoin blockchain. 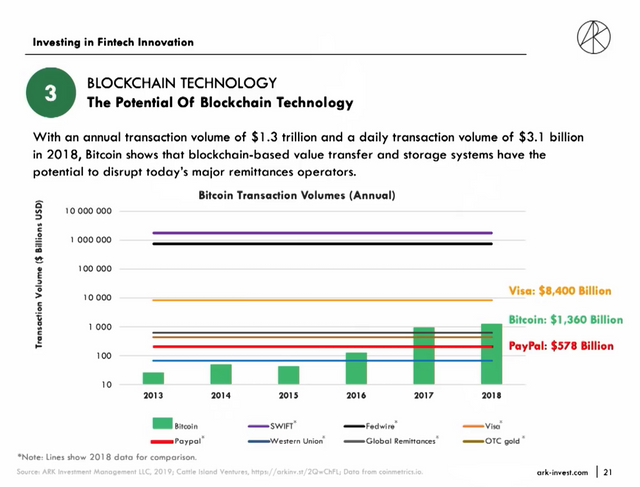 Cathie Woods talks about this a lot more toward the tail end of her presentation in South Africa, but the data does not lie. In fact, the data looks so good that many investors (particular ones from America) don’t believe the numbers shown above.

PayPal is an incredibly well-built network for payments. Visa is one of the largest players in the transaction landscape.

Bitcoin is 11 years old and it already has nearly triple the transacting (not trading.. transacting) volume of PayPal. It is growing exponentially and many people believe that Bitcoin will soon surpass the colossal payment networks such as Visa in terms of annual transaction volume.

That is truly insane. For a technology that most people claim to be in its “very early stages” (which I agree with), the fact that it is already starting to surpass some of these major financial outlets is mind-boggling.

Bitcoin is going to have many more improvement proposals. The network is going to go through many more tests. In the U.S. and similarly developed nations, using BTC to transact simply does not make sense. We can use USD with less of a hassle and honestly, I can send USD with less fees (0 fees, actually) to my friends.

Using BTC, I’d have to pay a network fee (which is small.. only a few USD), but it’s more than I’d be paying in terms of USD.

With that said, when I pay a developer or hire a freelance graphic designer who is from another country, I pay them in either BTC or STEEM.

The transaction goes through nearly instantaneously (less than 20 minutes for BTC and in 3 seconds for STEEM) and there is little to no fee associate with the TX. That freelancer then gets paid in a currency that cannot be taken nor devalued by their local government. They don’t have to wait days to get it and they can be assured that I cannot reverse the transaction once it is confirmed.

We are still at the beginning of this road, but many of these technologies (like AI and blockchain) are already walking amongst us in one form or another. The next 20 years will see a massive explosion in the ways that these technologies are leveraged in our every day lives.

This is getting a bit long. I’ll post a part two to this, which will cover the current and future landscape of fintech in particular. Be sure to check out the presentation by Cathie Woods, I really enjoyed it.